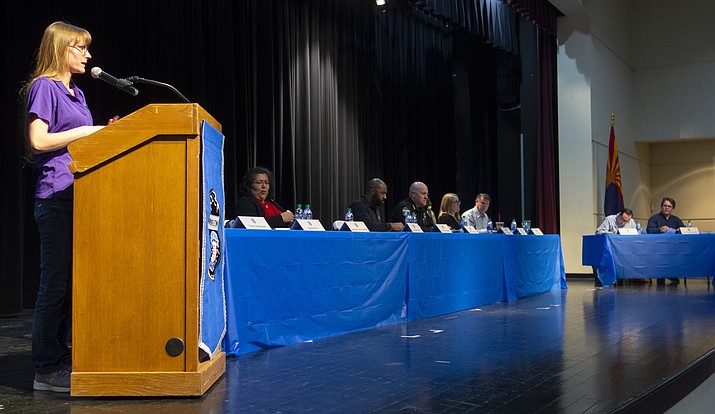 WINSLOW, Ariz. — On March 3, an opioid information panel consisting of a panel of experts and two moderators was held at Winslow High School.

More than 250 people attended the panel, which had been announced on the Winslow Police Department Facebook page.

“I am reaching out to all of you regarding an upcoming Town Hall Meeting to address the recent opioid related overdoses in our region. Over the course of the last three weeks here in Winslow, we have had four overdoses. In three of these cases, Winslow Police Officers administered Naloxone which saved the lives of three young adults. Yesterday, we tragically lost an 18-year-old male who is believed to have overdosed on fentanyl and was found deceased in his residence. The ages of all four victims were between the ages of 16 and 20 years old,” the post, written by Winslow Police Chief Dan Brown, read. “I do not want to have one more life lost to this growing epidemic. Law enforcement measures are NOT ENOUGH. We must educate our citizens quickly to avoid losing more lives. This town hall meeting will have a panel of experts from health service professionals, law enforcement leaders, city and county leaders, and others. Our goal is to bring this issue to light… we have to. As a community, as a region, we must do more.” 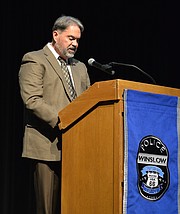 Winslow Mayor Tom McCauley opened the panel by saying that the city is working to reduce local opioid problems.

“As the mayor of the city of Winslow I am committed along with our Winslow Police Department to end this epidemic in the city,” he said.

To help combat the crisis the city has providing an anonymous tip line for those wishing to report an opioid related crime. There is also a $1,000 reward in Winslow for anyone who reports an opioid abuse which results in the arrest and conviction of a drug trafficker.

“All of these are anonymous, they do not need to know your name. If you know someone out there that is dealing drugs and they are bringing these things to town, call that number,” McCauley said. “You know what happens if you call that number? We get an arrest, we get a conviction, we’ll pay you $1,000.”

McCauley also explained how the current federal administration is pushing hard to tackle the problem, as well as the state.

“In our area the first contact a child might have contact with an opioid distributer is at age twelve,” said Panellist Vicky Solomon. “As a result there is a need to educate our children on the hazards of opioids, beginning at the age of 10 years of age.”