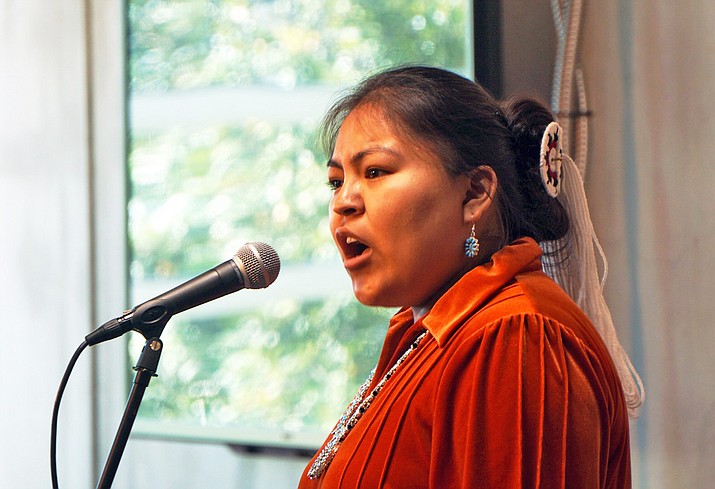 Sylvia Dale, a senior at Ganado High School was named state champion at the Arizona Poetry Out Load stae finals March 7 in Phoenix. Dale will represent Arizona at the Poetry Out Load national competition in Washington D.C. April 27-29. (Photos/Arizona Commission for the Arts)

The Arizona Poetry Out Loud State Finals were held at Burton Barr Central Library in Phoenix March 7. Ten students, representing schools from Tucson to Ganado, a chapter of the Navajo Nation, recited poems by a diverse array of literary luminaries, including Langston Hughes, Pablo Neruda, and contemporary Arizona poet, Natalie Diaz. After two rounds of recitations, four students advanced to the final round. From these four, Sylvia Dale was named State Champion while Oscar Landa Samano, a student at Coconino High School in Flagstaff, was named first runner-up.

A program of the National Endowment for the Arts and The Poetry Foundation, Poetry Out Loud is a poetry recitation competition delivered in high schools in all 50 states and three territories through partnerships with State Arts Agencies. Arizona’s Poetry Out Loud program is managed by the Arizona Commission on the Arts, an agency of the State of Arizona, with support from regional partners, University of Arizona Poetry Center, Phonetic Spit, and Andrea Lenhart, a Flagstaff-based poet and lecturer at Northern Arizona University.

This was Sylvia’s third year competing at the state level. She recited poems by Mary Lamb, Claude Mckay, and Natalie Diaz, a Mojave poet and an enrolled member of the Gila River Indian Tribe.

(Photos/Arizona Commission for the Arts)

“I really connected with her poem about the idea of Native Americans always being moved and looked down upon,” Dale said. “I really love her poem and how it demonstrates that we are here and we are still going to move forward.”

About the Arizona Commission on the Arts

One of 56 state and jurisdictional arts agencies across the United States, the Arizona Commission on the Arts is a 54-year-old agency of the State of Arizona and a leading force in the creative and professional development of Arizona’s arts sector. Through robust programs, research initiatives, and strategic grantmaking, the Arts Commission catalyzes arts-based partnerships that strengthen Arizona communities through the arts.

Information provided by the Arizona Commission on the Arts