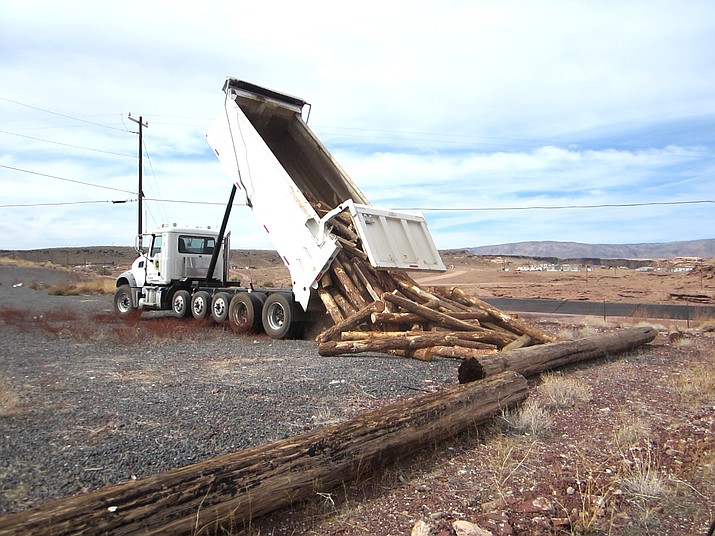 Joe Dirt Excavating delivers wood at the Cameron Chapter House March 6. The delivery is part of a pilot project by the National Forest Foundation, U.S. Forest Service and the Cameron Chapter to provide wood to residents who may not be able to travel to retrieve it from the forests. (Katherine Locke/NHO)

FLAGSTAFF, Ariz. — A pilot project to bring wood from a Four Forest Restoration Initiative (4FRI) to Cameron, Arizona was a success as a truck from Joe Dirt Excavation unloaded a load of ponderosa pine remnants March 6.

Milton Tso, Cameron Chapter president, said at first the wood would be stockpiled in the back of the chapter, with the goal of it being available for Cameron Chapter residents.

“Hopefully, with some help from the Navajo Nation, we’ll get some equipment to split it up,” Tso said. “We want to help our elders and people with a disability, or a single parent who is struggling, anyone who needs wood. We might deliver some by chapter truck.”

Ultimately, Tso said he hopes the wood can be delivered beyond Cameron — with Cameron being a hub where the wood can initially be stored and other chapters can come pick it up from there. He does caution that he doesn’t want people who are able to cut wood themselves to become dependent on the wood at the Cameron Chapter.

“We want the young people to still take care of their elders. We have to be careful that all our wood haulers don’t become overweight,” Tso said with a laugh. “We are looking for volunteers. If we had some guys out here, they could help buck up the wood and stack it.”

One of the positives for the chapters — the wood is free for the tribes it is being delivered to.

The National Forest Foundation, which is the official non-profit partner of the U.S. Forest Service, worked with Joe Dirt Excavation to purchase the wood and to provide for the transportation to Cameron.

Cameron Chapter President Milton Tso said a pilot project to bring firewood cut on the Four Forest Restoration Initiative to Cameron, Arizona is off to a good start. The wood will be used to help warm homes. (Katherine Locke/NHO)

“We felt like we really liked the idea of getting some of the wood from Flagstaff out here and then distributed to elders and folks who really can’t afford to come into the forest and cut their own wood,” said Henry Provencio, innovations and inefficiencies coordinator for the Forest Service with the 4FRI project, who was on hand to see the delivery of wood in Cameron on March 6.

Provencio points out, for families who have to drive to get the wood, the cost could be over a hundred dollars.

“You have drive and cut it,” he said. “A lot of folks don’t have that ability. So, if we make the wood available, at least in the beginning to some of the [places[ right on the edge (of the reservations) then maybe we can work to distribute that further into Hopi, as well.”

Provencio said the National Forest Foundation is the entity that made the wood delivery happen.

A lot of the work the National Forest Foundation does in northern Arizona is about minimizing fire and flood risk, helping improve forest health for wildlife and water sustainability.

“We look at expanding the ways that we can work to help support those restoration efforts,” said Rachel Davidson, director of the Southern Rockies Field Program for the National Forest Foundation. “Part of that is figuring out what to do with residual wood supplies that are coming from the restoration projects site.”

“And then, subsequently, about the need of the tribes to receive fuel wood because of some of the shutdowns of the local coal facilities,” Davidson said. “We thought it would be a really amazing opportunity to find some win-wins so that the National Forest Foundation could support tribal needs and community fuel while also looking for opportunities to basically get rid of those fuel supplies on National Forest lands as part of the restoration projects that we’re undertaking.”

The wood delivered to Cameron was residual wood from a local, small milling facility outside of Williams. But the wood came from A-1 mountain in the Coconino National Forest.

The foundation and all partners involved stress the delivery on March 6 was a pilot.

“It was really a pilot of how we can move the wood, where and how we coordinate with the tribes and making sure that we have that sort of connection and relationship built,” Davidson said. “The next project we’re looking to help fund will be from Locket Meadow where the forest already has some wood that’s been cut from the campground trying to minimize that fire risk, but the wood is still out on the project site.”

Davidson said the foundation would look at hiring an ancestral land crew to help buck up the wood and them move it down to staging areas.

“We’re still looking at how we can transport it to both the Hopi and Navajo tribes,” she said. “We’re really crossing our fingers from our perspective because we see some tremendous community benefits with the tribes and we are excited to build those relationships. From a restoration perspective, trying to minimize fire risks and community flood risk, there’s a huge opportunity to use that wood in a way that is far more beneficial than it sitting at a mill site and not being used or valued.”

Tso pictures how this could help a lot of the chapters on the western side of the Navajo Nation. Leupp Chapter, Tuba City, and Coalmine Chapter were just a few of the chapters he mentioned as places that could all benefit from having wood delivered.