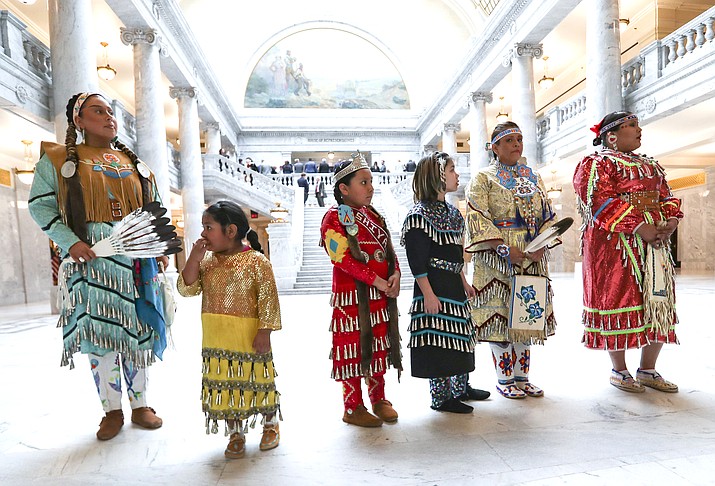 Jingle Dress dancers are pictured during an event to raise awareness for HB116 in the Capitol rotunda in Salt Lake City March 3. The bill would create a Murdered and Missing Indigenous Women and Girls Task Force. (Steve Griffin/The Deseret News via AP))

SALT LAKE CITY (AP) — Utah is poised to study the disproportionate violence inflicted against Native American women and girls after the Utah Legislature voted to create a task force.

Indigenous communities gathered at the Utah Capitol to celebrate March 3 after the proposal passed the Senate unanimously, the Deseret News reported.

It now heads to Republican Gov. Gary Herbert’s desk and his office did not immediately respond to a text message March 4 seeking comment on whether he will sign it.

“We have to make sure we protect all voices,” Romero said.

Nationwide, American Indian women face a murder rate more than 10 times the national average, according to federal statistics. Utah had the eighth-highest number of missing and slain indigenous women in a nationwide study of 71 cities completed by the Urban Indian Health Institute several years ago.

The violence inflicted against Native American women is worsened by incomplete data, poor institutional practices and protocol, and lack of resources, said Yolanda Francisco-Nez, executive director of Restoring Ancestral Winds, a group that supports tribal communities dealing with issues like domestic violence and sexual assault. When indigenous women or girls are killed, the deaths are often misclassified as suicides or different causes of death, she said.

“Because my granddaughter is Navajo — my granddaughters are Navajo — I’m not comfortable right now letting her go to places by herself,” she said. “Especially in Salt Lake City where I know that because she is an indigenous young woman she is vulnerable.”

Prosecution of non-Native American suspects in reservation crimes can also be scarce.

Republican Sen. David Hinkins co-sponsored the proposal and said there are often difficulties coordinating between the county sheriffs and the Navajo police force. His district covers the Navajo Nation, which also stretches into New Mexico and Arizona.

“We are just hoping we can save lives,” he said.