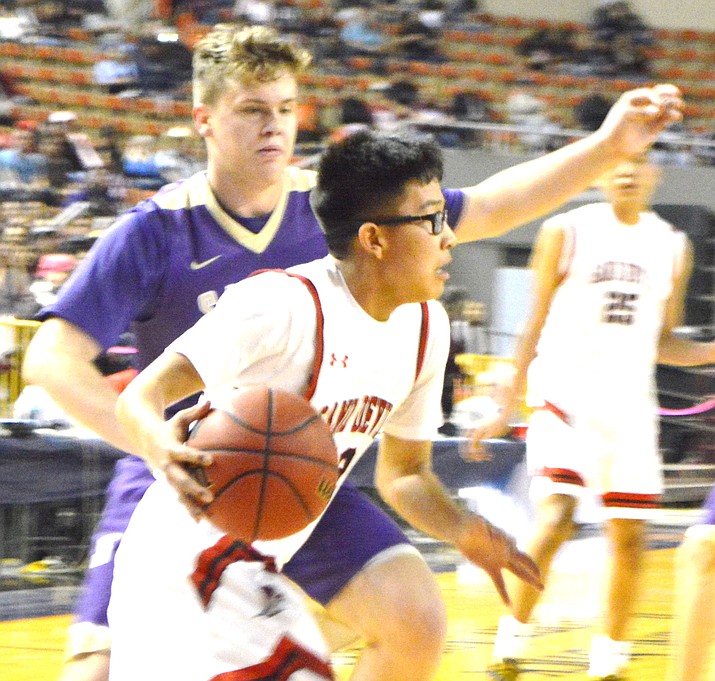 Page Sand Devils’ Robert Smith (1) looks for an open teammate, with Sabino’s Gabe Gomez (5) defending, during the Arizona State 3A Boys state tournament semifinals game at the Veterans Memorial Coliseum Feb. 28. Sabino won by a score of 53 to 50. (Anton Wero/NHO)

PHOENIX, Ariz. — In the boys state championship semifinals game, the No. 1 seed Page Sand Devils (29-1) matched up with the No. 5 seed Sabino Sabercats (26-2) of Tucson.

The tournament semifinals and championships were held at the Veterans Memorial Coliseum at the Arizona State Fairgrounds.

The Sabercats were able to eliminate the Sand Devils from further play in the 2020 state tournament, by a score of 53-50, ending Page’s impressive season.

The Sabercats led from the opening quarter 11-10, a lead that continued into the second quarter, where the Sabercats built on the lead outscoring the Sand Devils 12-9. Sabino held on to a four point lead, as the first half end, 23-19.

The Sand Devils had runs of 9 points and 5 points that kept them within two points of the Sabercats, 37-35, as the third period ended.

Page manage to outscore Sabino, 9-6 points, bringing the partisan Sand Devils crowd to their feet, with three minutes left in the final frame. Another run seemed to assure the Sand Devils a win, when they led, 50-46 with 41 seconds remaining.

That hope was erased when Page’s Pablo Gutierrez drove the lane for a basket and one, to give Sabino a one point lead, 51-50, with 22 seconds remaining. A foul by Page, sent Sabino’s César Saenz to the line for two free throw, Gomez calmly sank both free throws for the win, 53-50, sending Sabino to the 3A state title game.