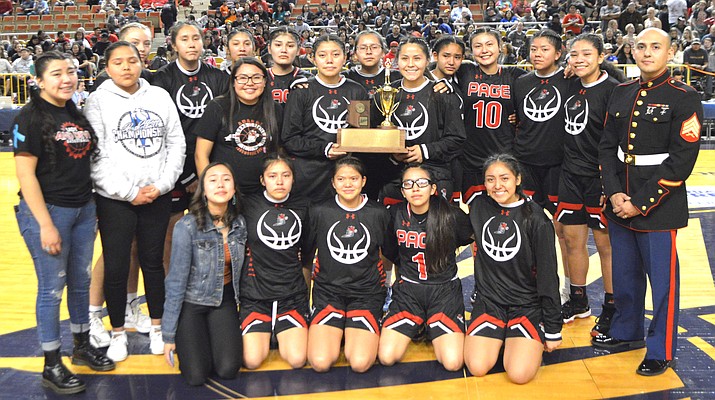 PHOENIX, Ariz. — The 2020 Arizona State 3A Boys and Girls tournament semifinals and championships were held at the Veterans Memorial Coliseum at the Arizona State Fairgrounds Feb. 28-29.

The girls state championship game featured, the No. 2 seed Page Lady Sand Devils (22-6) playing No. 1 seed Sabino Lady Sabercats (28-0) of Tucson. The Sabercats were victorious by a score of 42-35.

The Sand Devils advanced to the Arizona State 3A Boys Girls Championship game with a semifinal game win over the No. 3 seed American Leadership Academy Lady Eagles Feb. 28, by a score of 37-35.

The win matched up the 3A Girls championship title between the Sand Devils and the Sabercats Feb. 29 at the Veterans Memorial Coliseum.

Sabino’s Lauryn Manion and Kiya Durroh led the Sabercats to a 8 to 7 start, while Page’s Camryn Nockideneh and Neve Redhair responded with 11 point second quarter that gave the Sand Devils, a single point lead at halftime, 18 to 17.

The girls traded baskets in the third quarter, an advantage Sabino, who clung to a single digit lead going into the final quarter, 27 to 26.

The Sabercats “stayed posed,” said Sabercats Coach Joe Clare, during a 10 point run for the Sabercats, stretching the lead to, 37-32, with less than a minute left in the game.

Page’s dominate player Torrance Begay stayed focused until the final quarter, with baskets in the paints, but it was not enough to take over the lead, 37-35.

Sabino’s Ella Berg and Kamryn Doty, converted on seven free throws to close the win, 42-35 to let the celebration begin for the Sabercats.

Sabino’s Doty and Manion, had 15 points and 12 points respectively, for the winners.

After a quarter finals win over the No. 13 Snowflake Lady Lobos, by a score of 44 -39, the Ganado Lady Hornets advanced to the semifinals game with Sabercats of Tucson.

Ganado, behind the scoring of Michelene Coleman, and Jaedin James, quickly took an 11-7 first quarter lead. An eight to four points second quarter scoring, led to 19-11 point led for the Hornets at halftime.

The Sabercats outscored the Hornets, 15-9 in the third quarter, cutting into Ganado’s lead and trailed by only two points, 28 to 26, going into the fourth quarter.

Sabino held the Hornets to four points, while scoring 13 points, which led to a seven point win for the Sabercats, 39-32 and advancing to the 3A Girls state championship game.