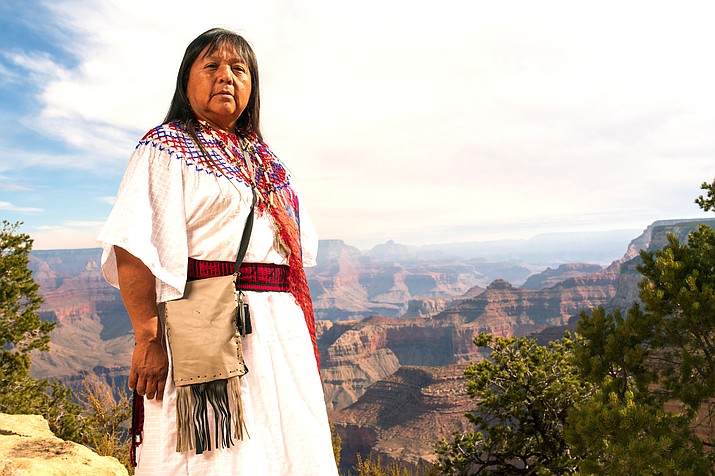 Colleen Kaska of the Havasupai Tribe shares her tribe's history of the Grand Canyon prior to it becoming a national park in 'The Voices of Grand Canyon,' an audio, video and written project that can now be viewed online. (Photo/Deidra Peaches, courtesy of Grand Canyon Trust)

Each of these tribal members share what the Grand Canyon means to them and what they know in their hearts to be true, according to text sent out about the project from Grand Canyon Trust, who helped facilitate the meetings for the tribes.

In the time leading up to the park’s centennial, the Intertribal Centennial Conversations group was formed to discuss the past, present and future of the Grand Canyon. Eleven tribes are officially affiliated with the Canyon, some of which are located hundreds of miles away, but they can still all trace their ancestors, cultures and places of origin to the Grand Canyon. 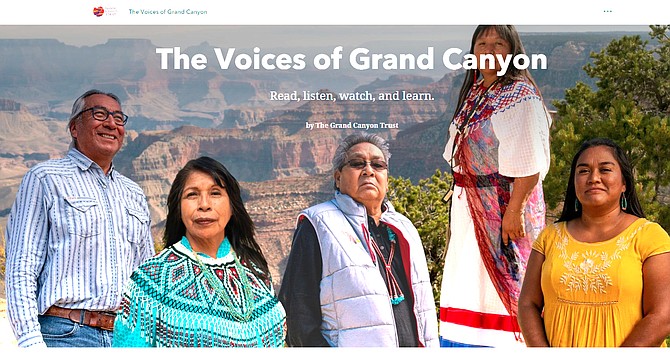 Sarana Riggs, Grand Canyon program manager at Grand Canyon Trust, said the tribes knew they wanted to talk about the history of the Grand Canyon and their connection to it.

“What does that mean to us? What is that? How do we really connect to a place that you guys call the Grand Canyon, but to us, in our own Native languages, we have a different name for it,” Riggs said. “It’s not the Grand Canyon to us, it is home. Our stories place us in the Canyon since time immemorial, well before there was a national park. These voices depict the canyon’s heartbeat. And as long as the heartbeat is still there, we are still here.”

Riggs said during the park's centennial celebrations, there was a focus on John Wesley Powell, the Kolb Brothers and others who were important to the ‘discovery’ of the park for tourism, but there was not very much acknowledgement of the Native history of the Grand Canyon.

“It goes beyond 11 tribes,” Riggs said. “Tribes from California, Nevada, Colorado, everybody has some sort of connection to this place. And it’s evident in the history, by the remnants that were left from our ancestors, inside the dwellings.”

Riggs said archeologists find shells, turquoise and different items that are not found in this region that show trade, intermarriage, shared connections and shared knowledge were common among tribes from near and far.

“That’s something that is not being talked about,” Riggs said.

The group went beyond just talking about their connections to the Canyon – they went deeper into elders' remembrance of the past and, in turn, what their grandparents had taught them about what it was like living in and around the canyon.

“And beyond that, to the emergence stories and how the emergence of their people and how they were instructed to live in this world and what they had to learn and carry through and songs and prayers and all of that,” Riggs said. “We talked about historical trauma, and trauma and pressure of being forced out of the area or reducing us into little reservation sized places, where it took away a lot of our ancestral land or gathering places and where we would hunt.”

Eventually, Riggs said, the conversation turned to how the tribes become a part Grand Canyon National Park beyond the symbolic relationship that has existed. The Intertribal Centennial Conversations group is now working on initiatives that put tribes at the forefront of education, economics and stewardship of the Grand Canyon.

And that is where the ‘Voices of Grand Canyon’ project came in.

While the project is something that tourists (6 million a year) and people unfamiliar with the Canyon can learn from, Riggs said the importance of the project goes beyond that. It is also meant for the youth of the tribes to understand and know their own history.

Riggs said her niece has never been to Grand Canyon and when her niece gets there, Riggs wants to be able to take her to an interpretive center and hear a Native voice talking about their connection to the Canyon. She wants to show her niece the plants that grow in the Canyon and tell her what they are and how they used to be harvested and stored. She wants to be able to take her niece to different points along the canyon and tell her about how and why they are important, that some of them are religious sites even though they look just like regular landscape, and it is a place where they pray and how to do that.

“That’s how I want all our youth to come to the Canyon,” Riggs said. “To learn and to have that connection. To be connected and understand that there’s more to learn. And I want them to walk away saying, ‘How else can I get my information?’”

The Intertribal Centennial Conversations group hopes to not only grow this collection of stories in the park’s 101st year, but also to make space in the tourist economy for Native-owned businesses. The group is planning an intertribal economic summit in June, in coordination with Grand Canyon National Park, the Grand Canyon Conservancy, and others, to create new opportunities and partnerships for the next century and beyond.

More information and to view the project can be found at https://storymaps.arcgis.com/stories/b22a6a09bb2344ff845d9efd3e4152f7.