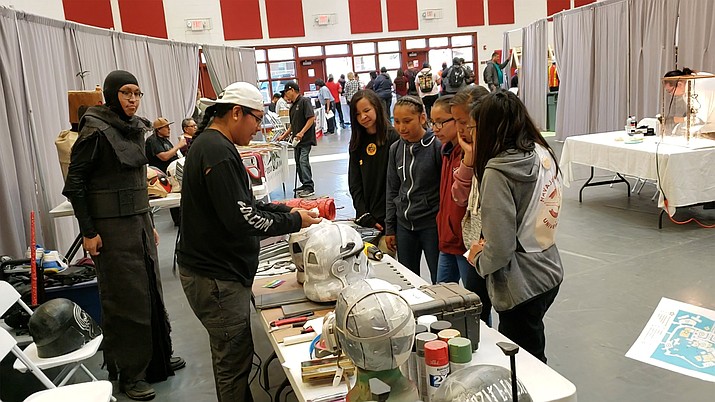 CROWNPOINT, N.M. — Last year, Navajo Technical University’s inaugural Diné Maker Nation Faire put Navajo ingenuity on display to the theme of, “The Evolution of Diné Makers,” while detailing in four worlds how the art of making has evolved over time.

This year, the event will step into the fifth world by including the Ke’yah Advanced Rural Manufacturing Alliance’s (KARMA) Innoventure Product Challenge.

Exhibitors will include artists, hobbyists, entrepreneurs, and educators, while K-12 students from regional schools will compete in the Product Challenge.

In previous years, students were tasked to develop a 3D printed toy for the Navajo Head Start program. This year, participants in the Product Challenge will display 3D printed products for Navajo elders.

The Diné Maker Nation Faire will be divided into five worlds according to the Navajo creation story. The first world, the black world, will feature traditional forms of making.

Brent Toadlena of Bida’ Moccasins and Art will be making a return to the event where he will be giving a demonstration on preparing cow hide for use as moccasin soles. Other exhibits will feature weaving, making a Navajo bun, and breaking down the Navajo sentence structure. A kids’ corner will also be set up for arts and crafts.

The second world, the blue world, will feature trade based forms of creation, such as welding, construction, and automotive.

The third world is signified by yellow and will feature forms of making regarding the reclaiming of identity. Artists, cosplayers, and chocolatiers will be featured in the yellow world as well as a chili cook-off competition.

The fourth world, the white world, will feature modern day forms of making like 3D printing and solar technology. The white world will also serve as the bridge into the fifth world, or the glittering world, where the Innoventure Product Challenge will be on display.

More information is available by contacting Daniel Vandever at dvandever@navajotech.edu.