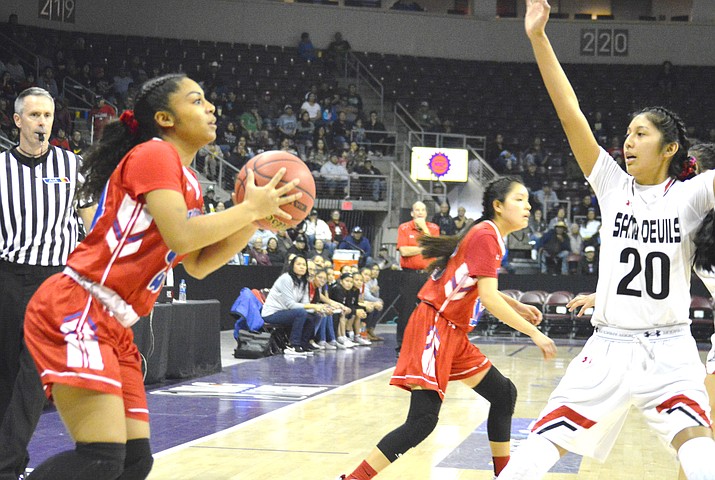 PRESCOTT, Ariz. — The Findlay Toyota Center in Prescott Valley played host to the quarterfinals of the 2020 Arizona 3A Girls State tournament. 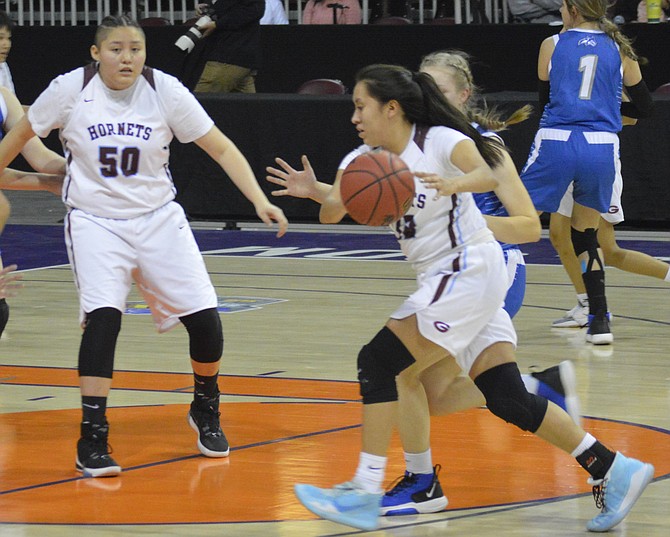 Ganado Hornets’ Jayla McIntosh (12) drives the ball into the paint for a shot attempt, during the Arizona State 3A Girls quarter final game, held at Findlay Toyota Center, in Prescott, Arizona, Feb. 24. Ganado won a third round game over the Snowflake Lobos, 44-39. (Anton Wero/NHO)

Hornets and Lobos opened the first quarter scoring nine points each with the score tied at 9 all.

Macee Papa scored six points in the paint for the Lady Lobos that started an 11 to 3 point run and a 20-12 lead midway in the second quarter. Ganado’s senior Jaylia McIntosh and junior Abigail Benally combined for nine points to take a single point lead at the intermission break, 21-20.

Ganado outscored Snowflake in the third quarter, 11 to 10 points, to increase the Lady Hornets lead, 32-30, going into the final quarter.

In the fourth quarter the Lady Hornets sank six of nine free throws and three scores in the paint to ice the game, 44-39.

Michelene Coleman had a game high of 13 points the Lady Hornets, followed by Mcintosh with 10 points.

The Lady Lobos were led by Macee Papa and Trysten Hancock, with 12 and 11 points.

The Lady Hornets advances to the semi-final game of the 2020 Arizona Girls State tournament and met No. 1 seed Sabino Lady Sabercats Feb. 28 at the Arizona Veterans Coliseum, in Phoenix, Arizona.

Tuba City came out of the gates on fire, hitting on all cylinders. The Lady Warriors hit six 3-point baskets beyond the arc, including 4 baskets in the paint and took a 27 to 13 point lead in the opening quarter over the ALA Gilbert Lady Eagles.

The Lady Eagles calmly responded with a 20-point second quarter. Tiffany Quigley, 3A Metro East player of the year, had three assists plus seven points during the run, narrowing the lead to three points. The score was 36 to 33 at the break

In the third quarter both team traded baskets, the Lady Warriors outscored the Lady Eagles 14 to 12 heading to final quarter with a five point lead, 50 to 45.

Quigley hit a three pointer to begin the fourth quarter and teammate Keeli Kaye’s six points, aided the Lady Eagles with a mini-run that led to a 54 to 51 point lead with three minutes left in the game. ALA Lady Eagle spread the floor and ran out the clock, clinging to a three point lead, and the win.

ALA Eagles had three players in double figures, Kaye with 14 points, Quigley and Kymani Bledsoe with 12 points each.

The Lady Warriors’ Larissa Yazzie led all scorers in the game with 19 points, Jayda Chee scored a dozen points and Chenille Nodman had 10 points.

No. 3 seed ALA Gilbert in state tournament moved on to played in the semifinals game, with the No. 2 seed Lady Sand Devils of Page, Feb. 28 at the Arizona Veteran Coliseum.

Camryn Nockideneh and Torrance Begay led the Page Lady Sand Devils to a 17 to 9 first quarter start over the Lady Road Runners of Holbrook. 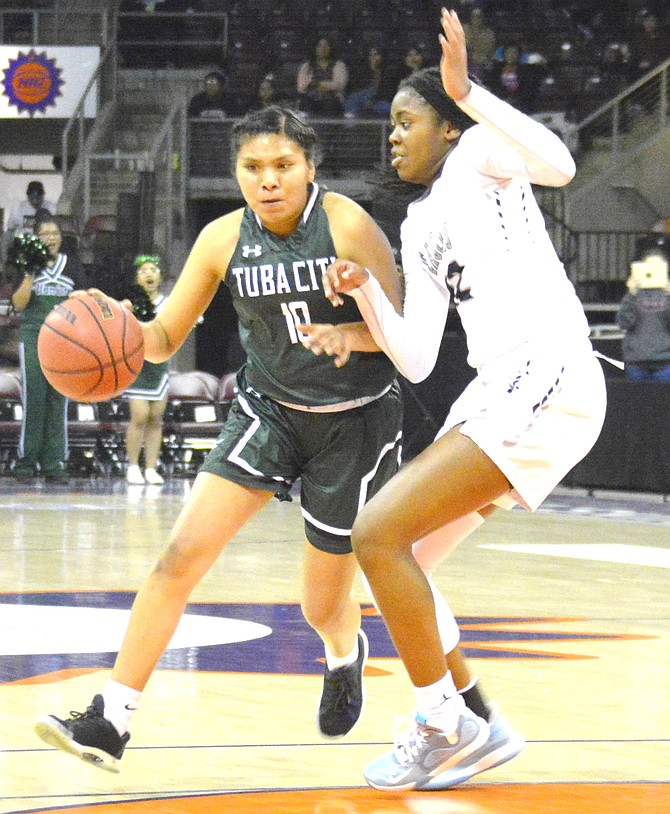 Tuba City’ Thalia Susanyatame (10) drives the ball into the paint for a shot attempt, ALA Gilbert won a third round game over the Tuba City Warriors, 58-55. (Anton Wero/NHO)

Page Sand Devils matched Holbrook Road Runners basket for basket, in the second quarter. Page led at halftime with a score of 29 to 23.

Page and Holbrook each scored 23 points in the final quarter. Page converted on 15 of 24 free throw attempts while Holbrook pushed the ball in the paint for their points, plus 3 treys, but that was not enough to overtake the Lady Sand Devils. The final score for Page vs Holbrook was 67-59.

Holbrook Lady Road Runners were led by 3A East player of the year, Madison Chappell and Matehya Aberle with 14 points each, Desirea Bain added 12 points and Jineane Cummings contributed 10 points.

The final game of the night was a slow start for Sabercats and Wildcats. The Sabercats made 5 of 7 free throws for an early lead, 10 to 8. 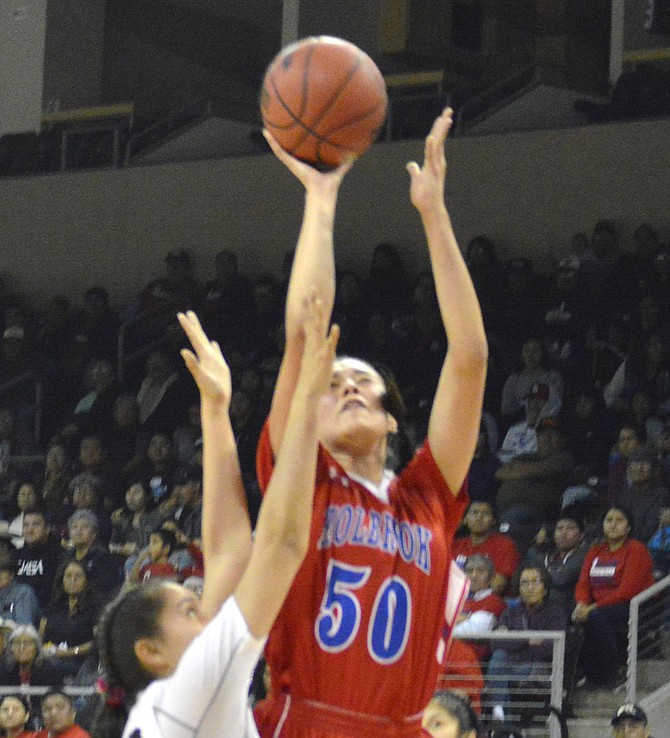 Most baskets attempts were in the paint. Sabino’s slight height advantage, was matched by Chinle’s Tea Murray, who worked for points in the paint, seven points plus two treys by Tsenji Nacona and one by Ashlyn Lynch, contributed to 16 points for Chinle that was answered by Sabino’s 17 points. Advantage Sabino 27 to 24 at the half.

Chinle out pointed Sabino in the third quarter 15 to 10, to take a 39 to 37 point lead going into the final quarter.

Sabino’s Kamryn Doty and Kiya Dorroh amassed 15 points while Chinle only scored 10 points that led to a 52 to 49 points win for the tournament number one seed, Sabino Sabercats.

Dorron scored a team high of 20 points, plus 14 points by Kadie Healy and 10 points by Lauryn Manion, that assured a semi-finals matchup with the No. 5 seed Ganado Lady Hornets.

Chinle’s Tea Murray led all scorers in the game with 21 points, followed by Aisha Ashley with 12 points.