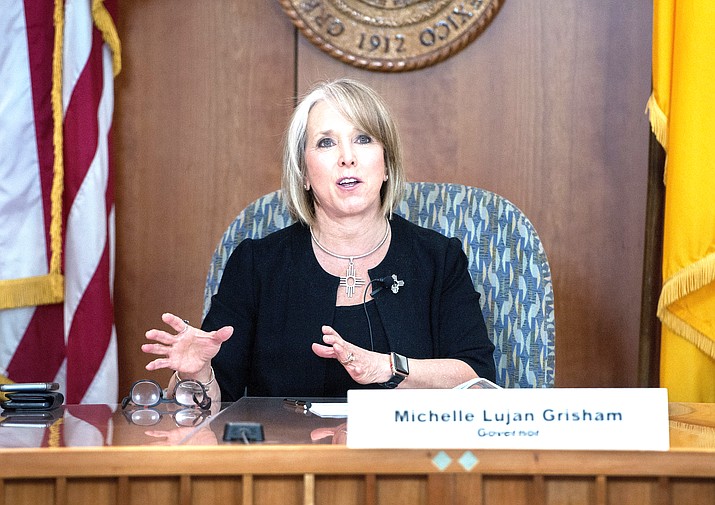 New Mexico Gov. Michelle Lujan Grisham gives an update on the COVID-19 outbreak in the state Capitol during a news conference in Santa Fe, New Mexico. The leader of one of the largest Native American tribes in the U.S. called on Lujan Grisham June 23, to end efforts to fight a court ruling that orders improvements in education for members of his tribe and other vulnerable groups. (Eddie Moore/The Albuquerque Journal via AP, Pool,File)

SANTA FE, N.M. (AP) — The leader of one of the largest Native American tribes in the U.S. called June 24 for the governor of New Mexico to end efforts to fight a court ruling that orders improvements in education for members of his tribe and other vulnerable groups.

The comments from Navajo Nation President Jonathan Nez come ahead of a court hearing next week in which Democratic Gov. Michelle Lujan Grisham will ask a state judge to dismiss a consolidated lawsuit representing Native American and Hispanic plaintiffs.

“The lawsuit needs to be pursued so Native students can be provided adequate education programs and services necessary to learn and thrive,” Nez said. “Our students deserve an educational environment that prioritizes their culture and unique needs. It is time for our Native students to have the same opportunities as other students.”

In 2018, a judge ruled in favor of the plaintiffs, ordering the state to address inequality in funding and academic outcomes for low-income, Native American and Hispanic students — which account for about 80 percent of children.

Lujan Grisham’s administration argues in a motion to dismiss the suit that the state has increased funding for education, that future changes will take years, and that they should not be micromanaged by court orders.

“Sweeping and transformational progress takes time, and the governor has not yielded in her unwavering commitment to as much,” spokeswoman Nora Meyers Sackett said. “But an educational transformation should be overseen by the education professionals of the Public Education Department and the state Legislature, not a court.”

A judge considered the request to dismiss the case at a hearing June 29.

Navajo leaders contend that two years have passed and the state has not implemented the systemic change required by the order. They say public schools serving Navajo students have not provided quality or useful technical assistance, guidance or training needed to assist in the implementation of special education programs.

“The court decision states that the state failed to abide by the New Mexico Indian Education Act, and this is an issue we cannot ignore,” Nez said.

The Navajo Nation has about 325,000 enrolled members, about 175,000 of whom live on the reservation that spans parts of Arizona, New Mexico and Utah.

Cedar Attanasio is a corps member for the Associated Press/Report for America Statehouse News Initiative. Report for America is a nonprofit national service program that places journalists in local newsrooms to report on undercovered issues.