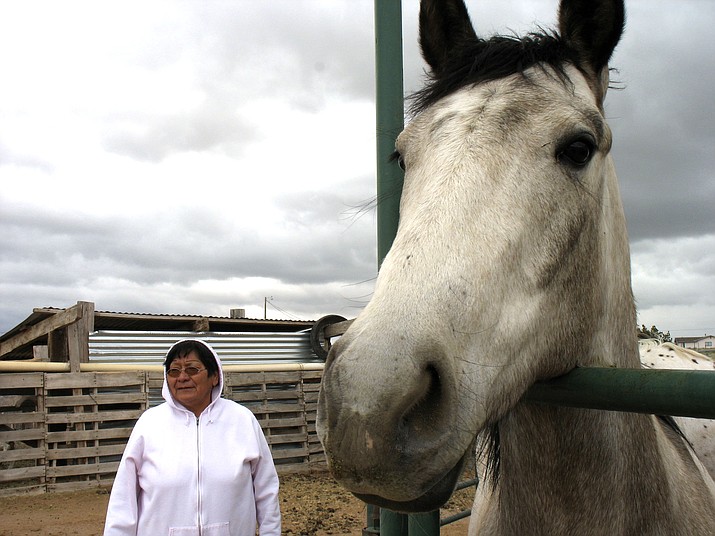 Virginia Yazzie tends to her horse on her home site in Sanders, Arizona in May 2008. A recent report states that 32 genetically diverse horse breeds have been identified on the Navajo Nation so far. (AP Photo/Felicia Fonseca)

WINDOW ROCK, Ariz. —Thirty-two genetically distinct horse breeds have been identified on the Navajo Nation, according to a recent report made through the Navajo Horse Genetic Program.

The report was given to members of the Resources and Development Committee (RDC) of the Navajo Nation Council June 24 by Navajo Nation Department of Agriculture.

The report came at the request of Council Delegate Mark Freeland (Becenti, Lake Valley, Nahodishgish, Standing Rock, Whiterock, Huerfano, Nageezi, Crownpoint), member of RDC, who expressed concern for the overabundance of feral horses on the Navajo Nation that appear sick or starving. 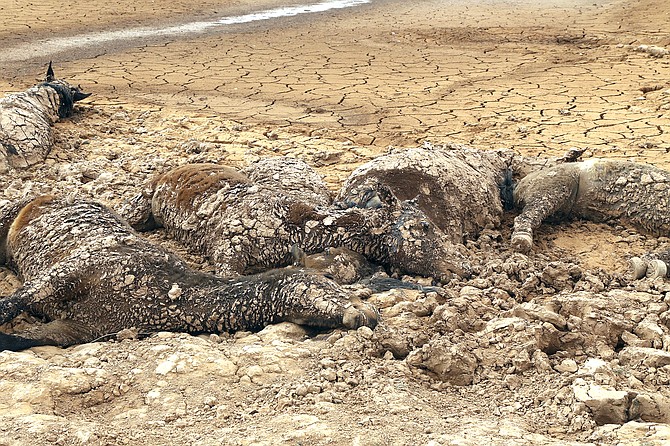 Scores of dead horses are shown in a dried up stock pond on Navajo tribal land near Cameron, Arizona, May 2018. (Mihio Manus/Navajo Nation via AP, File)

EdMiles Harvey, programmer and project specialist with the Navajo Horse Genetic Program, provided an update to the RDC on recent efforts to genetically identify the ‘Navajo Horse.’

Harvey reported the program has partnered with Texas A&M University and Navajo Technical University to run genetic tests on 100 feral horses from 15 chapters. The program has identified 32 genetically distinct horse breeds on the Navajo Nation with ancestral lineages in East Asia and South America in their initial sample.

Harvey reported the initial sample study will be expanded by gathering at least four horses from each of the 110 chapters on the reservation. The larger sample will help determine the diversity of feral horses on the Navajo Nation, which may help improve management efforts.

Lacey Salabye, an extension agent for the department, and principal planner Roxie June reported next on the Equine Reward Program (ERP) and their Horse Removal Report.

Salabye stated ERP’s operations were discontinued June 23 by order of the Navajo Nation Division of Natural Resources (DNR). Participants of the ERP received $50 for each horse they turned over to the program, but the program began turning people away after being overloaded.

Before the discontinuation, the ERP had received 158 unbranded feral horses and horses surrendered by owners that could no longer care after them. ERP reached their capacity to both take care of the horses and respond effectively to roundup requests.

Salabye indicated the coronavirus pandemic has profoundly impacted the market for horses, and residents often cannot afford to keep livestock.

“Despite what people say, we love and respect all of our animals, but have to do the removal to ensure we have a manageable number,” June said.

June said the program wants to avoid drastic incidents, such as the 2018 severe drought that killed 200 feral horses in Grey Mountain, Arizona. Addressing additional challenges, such as the Navajo Nation’s ongoing drought and broken windmills, have pushed the department’s workers and volunteers to their full capacity.

Dr. Rudy Shebala, executive director of the DNR, later indicated that the ERP would resume in the fall when foals are less dependent on their mothers for food and protection.

RDC followed the reports with questions regarding any solutions the department is putting in place during the COVID-19 pandemic to address the needs of horses on the Navajo Nation.

They sought details on how land overgrazing, lack of water and feral horse inbreeding were going to be handled.

“We want to ensure we move forward reducing the numbers [of feral horses on the Navajo Nation] in a scientifically and culturally appropriate manner where we are not slaughtering horses,” Shebala said.

Shebala provided an extensive history of horses on the Navajo Nation and described how understanding their genetic identities will help integrate more durable long-term solutions to the current problems. He described a horse farm in Oregon that produces pure-bred Kiger Mustangs and envisions developing a similar operation on the Navajo Nation.

Horses with specific genetics could be scientifically adapted to the 21 microclimates across the region and staff could be hired to train them.