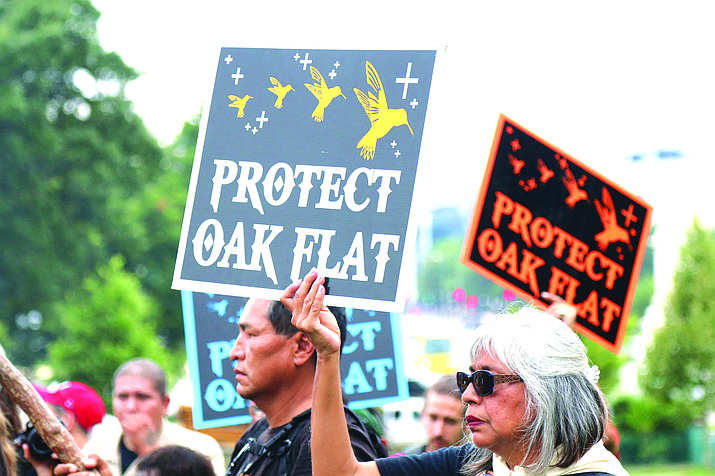 Members of the San Carlos Apache tribe gathered at the Capitol in 2015 to protest the proposal to swap lands in the Tonto National Forest, including the Oak Flat area that is sacred to them, for the Resolution Copper mine. (Photo by Jamie Cochran/Cronkite News)

PHOENIX – As President Donald Trump was hailing the pace of border wall construction June 23, Tohono O’odham Nation Chairman Ned Norris Jr. was bemoaning it as a project that continues “to destroy … sacred sites.”

He was one of five tribal leaders, along with San Carlos Apache Chairman Terry Rambler, who took part in a National Congress of American Indians virtual forum June 23 on threats to tribal lands from federal government action.

The forum, “Protecting Tribal Lands and Sacred Places: Current Threats across Indian Country,” ranged from complaints of physical destruction of tribal sites to efforts to block tribal checkpoints aimed at stopping the spread of COVID-19. 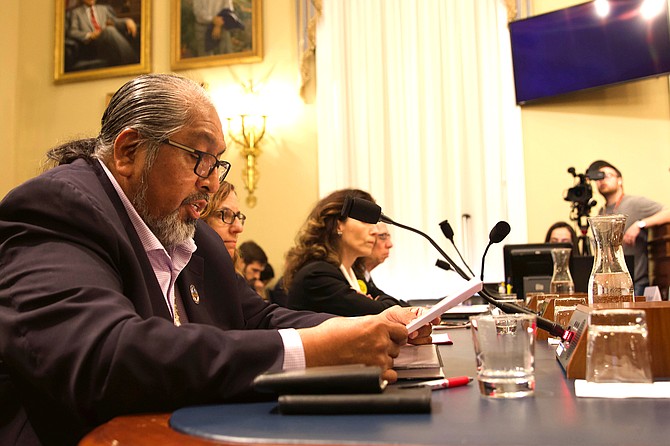 Tohono O’odham Chairman Ned Norris Jr. tells a House panel in February that blasting for border wall construction was on the “final resting place” for many of his tribe’s ancestors. Norris did not learn of the blasting until the day of the work. (Photo by Jessica Myers/Cronkite News) 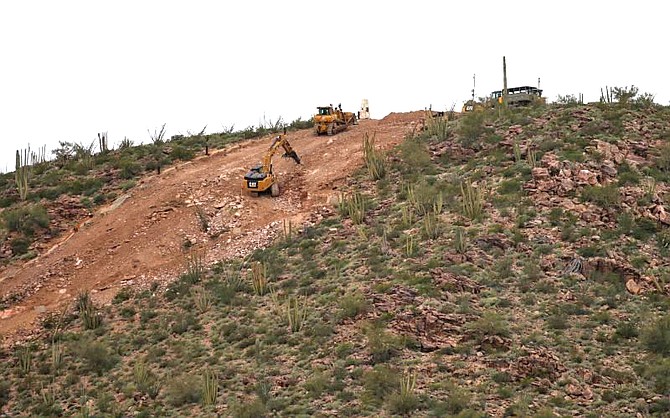 Earthmoving equipment clears a path up Monument Hill in the Organ Pipe Cactus National Monument in February. The Tohono O’odham say the site is environmentally sensitive and sacred to them. (Photo by Annabella Piunti/Cronkite News)

For Norris, it is the wall going through his reservation which straddles the U.S.-Mexico border and through the Organ Pipe Cactus National Monument where the Tohono O’odham say there are burial and archeological sites.

For Rambler, the threat is the Resolution Copper Mine planned for an area known as Oak Flat. The site was part of a land swap engineered by members of Arizona’s congressional delegation in 2014, that gave the mining company 2,400 acres of copper-rich federal land in exchange for 5,000 privately held acres in southeastern Arizona.

“Although the tribe’s lawyers are cautioning not to discuss litigation matters, I will tell all of you that the tribe will continue to fight to stop this land transfer,” that Rambler said “will destroy sacred sites.”

Besides the cultural value of the land, Rambler said that the mine would lead to environmental damage in the Tonto National Forest, including groundwater pollution and poisoned lands.

But Resolution Copper spokesman Dan Blondeau said in an emailed statement, however, that the company respects tribal sovereignty and welcomes the opportunity to continue working with Native Americans and other community stakeholders in shaping the project.

“From the beginning, we have designed this project with sustainability in mind. Resolution Copper will adhere to stringent federal and state regulations and protections for water, using the best-demonstrated control technologies,” Blondeau’s email said.

He said that includes an independent monitoring program through which the community can access third-party experts to verify water-quality analysis.

Norris said his tribe has been harmed as much by the government’s action – border wall construction through the Organ Pipe Cactus National Monument – as by its inaction. He said tribal officials were given almost no notice before construction crews began blasting for the wall, and that the government has been indifferent to the tribe’s concerns.

Customs and Border Protection (CBP), which is in charge of the wall project, did not immediately respond to a request for comment June 23 on Norris’ charges.

In February, CBP contractors began work in the national monument as part of hundreds of miles of new border wall construction the Trump administration has planned on the southwestern border.

But that work was being hailed June 23 by Trump, who was in Yuma to mark the completion of the first 200 miles of border wall construction, an achievement he said has “been incredible.”

“Our numbers on the border, as you know, are at just about a record-breaking low. People are not being able to cross the border,” Trump said before leaving the White House for Arizona. “The wall is up, because we have more than 200 – we have about 212 miles up of wall. So that’s good.”

Norris said the Tohono O’odham realize that the U.S. needs to secure its borders, but building the wall is not the way to do it – particularly since the administration has waived numerous environmental regulations to speed wall construction, which Norris called on Congress to stop.

Until then, Norris said the administration has failed them.