NTEC submits proposal for solar array at Navajo Mine 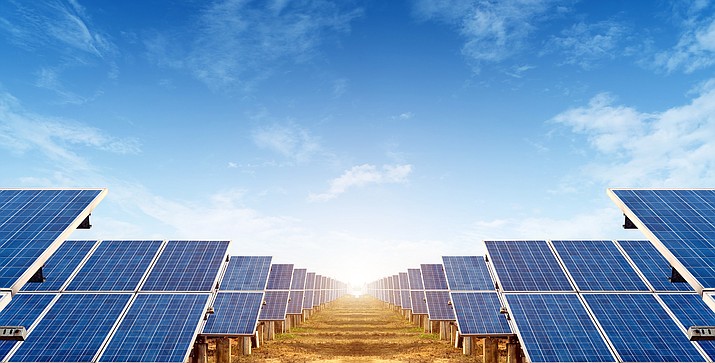 FARMINGTON, N.M.— Navajo Transitional Energy Company (NTEC) has announced that the company is partnering with Photosol US (Photosol) to establish the next step toward building a renewable energy portfolio on the Navajo Nation.

The companies submitted a proposal June 17 to site 200 MW, of a 400 MW, solar array on reclaimed Navajo Mine land.

If accepted, the project could generate up to $20 million in tax revenues for the Navajo Nation over 40 years.

“Including solar and other renewable energy sources in NTEC’s portfolio has always been part of our vision for NTEC and the Nation,” said Chairman Timothy McLaughlin. “We are excited for the opportunity to transition the reclaimed land at Navajo Mine to the production of renewable energy that has the potential to provide long-term revenues for the Nation.”

The solar proposal is a response to Arizona electric utility Salt River Project’s request for proposals to site and supply a total of 400 MW of solar power.

NTEC is partnering with Photosol, a world leader in renewable energy storage solutions. Photosol currently has over 382 MW of solar plants in operation and construction along with an over 7,500 MW project pipeline.

NTEC said the solar proposal builds upon its commitment to conscientious energy development. Last year the company invested in Texas Mineral Resources, a company which is developing innovative extraction methods for rare earth minerals and metals, which are key component of solar panels and the batteries necessary to store solar energy and power electric vehicles.

“It is very exciting to play a role in developing two of the key components to a viable solar powered future—the minerals and metals necessary for the infrastructure and the solar array that will generate the power on Navajo land,” McLaughlin said.

NTEC is an autonomous single member limited liability company, organized under the laws of the Navajo Nation, that owns mines in Montana, New Mexico, and Wyoming. The mission of NTEC is to be a reliable, safe producer of coal, while diversifying the Navajo Nation’s energy resources to create economic sustainability for the Nation and the Navajo people. NTEC’s sole shareholder is the Navajo Nation.

More information about NTEC is available at www.navajo-tec.com.