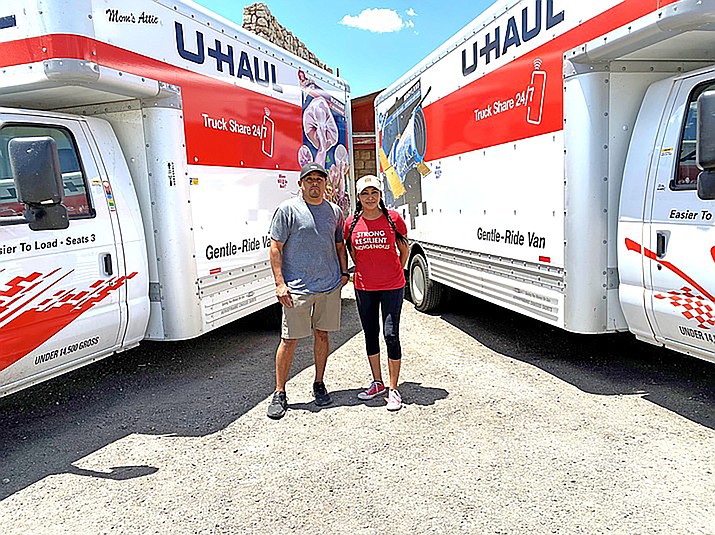 Thomas Kaye and Kiona Arellanes deliver supplies to Mishongnovi on the Hopi reservation as part of the mission of the Hopi Relief Fund. (Photo courtesy of Hopi Relief)

FLAGSTAFF, Ariz. — The COVID-19 pandemic has hit people in many different ways. For Thomas Kaye and his sister, Kiona Arellanes, it was a call to action, so they created the Hopi Relief Fund, which they soon hope to turn into a non-profit.

But Kaye and his sister have always lived in the Valley, even though they visited the reservation as kids. Kaye’s kids are enrolled tribal members.

The explanation is important because of the call to action both Kaye and Arellanes felt when the pandemic struck — the need to do something to help.

“It’s really weird,” Kaye said. “I can’t even explain it, but it was just like we were drawn home.” 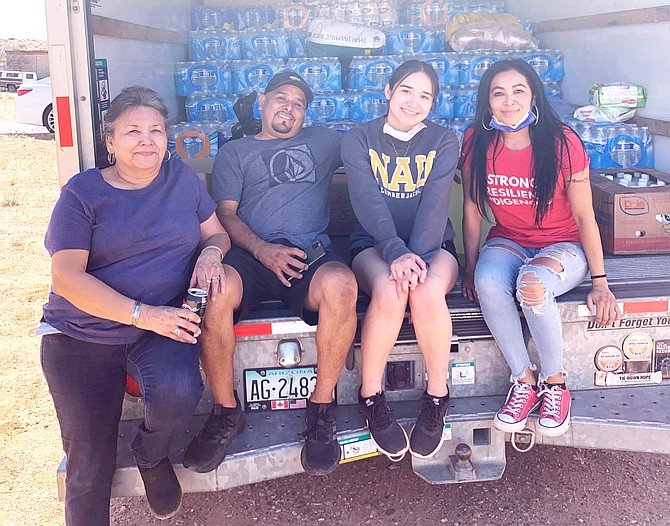 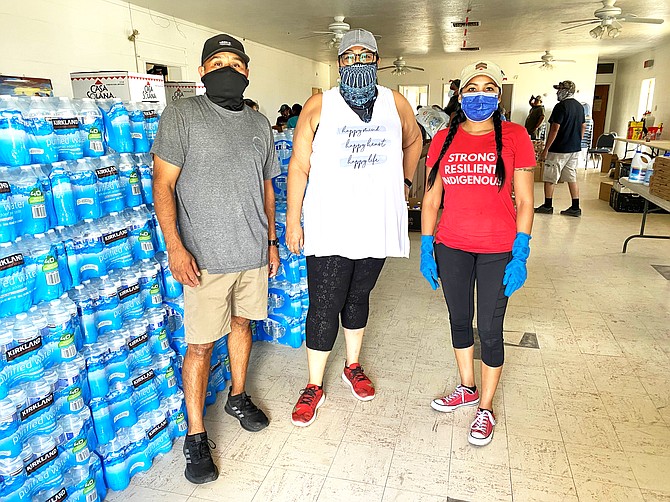 Pallets of bottled water are delivered to the Hopi reservation June 12. (Photo courtesy of Hopi Relief) 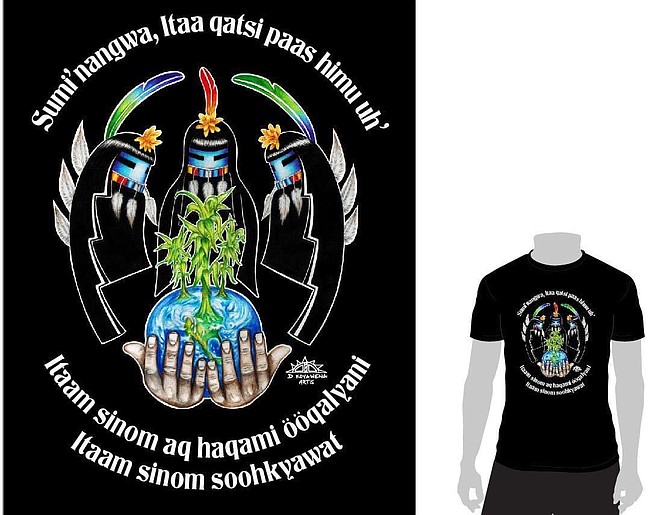 Hopi relief t-shirt by Hopi artist Duane Koyawena are now available. Proceeds from the sale go toward relief efforts on the Hopi reservation. So far, the group has sold 625 shirts at $25 each. More information or to purchase a shirt is available at https://hopirelief.org. (Photo courtesy of Hopi Relief)

So, Kaye and Arellanes said, ‘let’s gather a carload of supplies. Let’s take them up there.’

After reaching out to family members, and people he knows in real estate, Kaye had such a big response he realized he might need a large U-Haul truck.

“It was insane how fast it came together,” Kaye said.

Once they got up to Hopi with the supplies, they realized immediately they needed to do more. Some of the funds from the other relief organizations weren’t getting to Hopi and some of the villages hadn’t received any help.

“We’d heard of the Navajo & Hopi Relief Fund and the perception was that there was plenty of money,” Kaye said. “This is no knock to anyone, but that first trip was an eye opening experience.”

They brought five pallets of water, but the need in the villages was overwhelming. And the pushback on Kaye and Arellanes was intense because they don’t live on the reservation and the Hopi people were suspicious of them and their effort to help.

“We’ve been breaking down barriers, talking to people,” Kaye said. “They’ve slowly opened up to us.”

Kaye, who is a self-admitted dreamer, said on the drive home from their first trip that he thought about bringing an 18-wheeler full of supplies to the villages. But realized that starting a nonprofit would be the better way to go.

He and his sister started a Hopi Relief GoFundMe to raise money to buy supplies in the Valley and bring them to Hopi.

They also partnered with Hopi artist Duane Koyawena who designed a t-shirt, which they are selling as a fundraiser.

So far, they have sold 625 shirts at $25 each. They said 100 percent of the money raised on the GoFundMe page and the t-shirt sale is going to the Hopi Relief Fund.

The pair has also partnered with people who are already doing something in the communities — community administrators, which every village has, because they already have a foothold in the villages.

“They know their community,” Kaye said. “They know what they need and they’re already trying to do something. So our goal is to offer them relief and be able to buy in bulk down in the Valley and take it up to them.”

Basically, Kaye said it’s a ‘you tell us what you need and we’ll get it for you to the best of our ability.’

“We’ve gotten everything they’ve asked for from hand sanitizer in bulk, to toilet paper in bulk, to paper towels and spam,” Kaye said.

The spam donation came from Hormel Foods, who donated a pallet. Kaye had reached out to the company to ask if he could buy in bulk and Hormel responded that they have been trying to donate but because of supply and demand issues, they had been unable to.

In a little over a month since the Hopi Relief Fund started, they have found their efforts are working. People in the villages are contacting them asking if they can help.

Other people have sent funds they have raised themselves and have asked Kaye and Arellanes to purchase what they need. They are helping as many of the villages on Hopi as they can. They even had a woman on Hopi contact them about a family member in Phoenix who had COVID-19 and asked if the pair could help the family, which they did.

Kaye and Arellanesare creative in how they get some supplies. Not everything is available in Phoenix, but Kaye has contacts in Mexico.

“We’re thinking outside the box,” Kaye said. “We’re not taking ‘no’ for an answer.”

That is where not living on Hopi helps, Kaye thinks. It enables both Kaye and his sister to have a different perspective on ways to help. Now, when they talked to village administrators, they are welcomed with open arms.

“Everybody’s kinda opening up because I think they realized we’re doing it for the right reasons,” Kaye said. “We are Hopi, whether we live there or not, we are Hopi. And we’re just trying to help where we can. We’re not trying to step on anybody’s toes. We’re not trying to make anybody look bad. And most importantly, we’re representing Hopi the right way and not as ‘poor us,’ because that’s not our nature. That’s not who we are.”

More information on the Hopi Relief Fund is available at hopirelief.org. Their email is hopirelief@gmail.com.

Supplies to Hopi ✊� by Kiona Arellanes