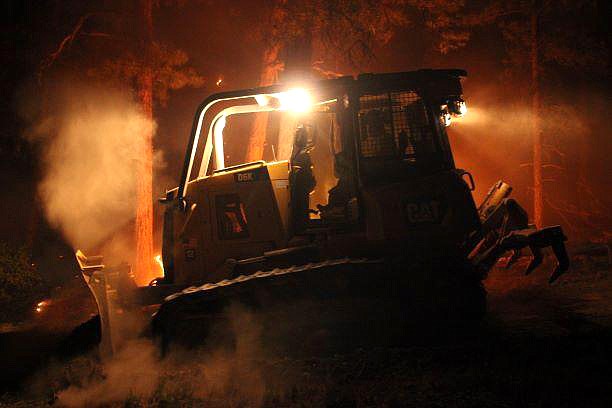 A dozer works the nightshift on the Mangum Fire on the North Kaibab Plateau June 20. (Photo/Inciweb)

The fire started June 8 and forced the evacuation of Jacob Lake and several homes along House Rock Road. The North Rim of Grand Canyon National Park is also closed.

There are currently 642 personnel working on the Mangum Fire.

According to the U.S. Forest Service, westerly winds aligned with east draining canyons to push the fire off the rocky slopes towards the House Rock Valley June 21. By the afternoon, a large smoke column developed over the northeast portion of the fire.

As of June 23, Highway 89A is closed from Mile Post 545 near the Cliff Dwellings to Fredonia. Businesses remain open in Marble Canyon and Vermillion Cliffs. Highway 67 from Jacob Lake to the North Rim of Grand Canyon National Park is also closed.