Census field workers back on Navajo Nation, with work cut out for them 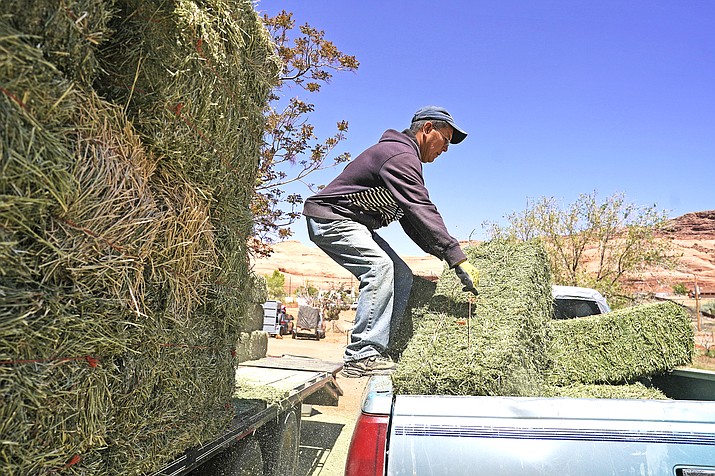 Charlie Whitehouse loads hay into the back of a pickup truck in Oljato-Monument Valley, Utah, on the Navajo reservation April 27. Even before the pandemic, people living in rural communities and on reservations were among the toughest groups to count in the 2020 census. (AP Photo/Carolyn Kaster)

WINDOW ROCK, Ariz. – Experts can cite any number of historical and logistical reasons why Native Americans have relatively low response rates to the Census, but Arbin Mitchell points to a very new, and very specific challenge this year – COVID-19.

“People need to understand we were just out in the field for three days, from March 15 to March 18, and we only managed to drop off just a little over 3,000 questionnaires in those three days,” before field operations on the Navajo Nation were shut down by the virus, Mitchell said. 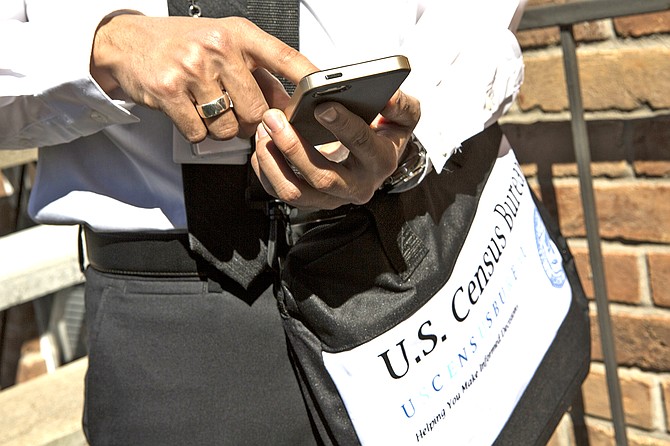 More than 60 percent of Americans have responded to the 2020 Census, which was sent out in mid-March, but tribal response rates in Arizona remain much lower. In addition to the usual hurdles of remoteness and low internet access, the response has been hurt by COVID-19, which has hit tribes particularly hard. (Photo by Scott Dalton/U.S. Census Bureau)

Mitchell, whose title is tribal partnership specialist and area Census office manager, said field operations started up again last week. But enumerators have their work cut out for them: While the national response rate was 61.5 percent as of June 18 and the response rate for Arizona was 58.1 percent, just 1.5 percent of Navajo Nation residents had returned their forms, according to the Census Bureau.

And the Navajo are not alone. Most tribes in Arizona are well below the state average, with the highest response coming from the Ak-Chin Indian Community, which had a 52 percent response rate. The Navajo rate was just the third-lowest, with just 1 percent of Hopi returning forms and no Census response from the Havasupai Tribe.

Even the Ak-Chin have felt the effects of COVID-19 on their Census efforts.

“We did kind of get a late start due to the pandemic that is going on, and also we were out of work for a couple of months,” said Dorissa Garcia, enrollment coordinator for the Ak-Chin.

Garcia said she and Vanessa Soliz, the tribe’s enrollment technician, have been organizing incentive programs and advertising the census on social media and through different tribal departments.

Tribal officials stress the importance of what’s riding on their members’ response to the Census. Not only are the numbers used to determine representation in Congress and statehouses, but they are used in federal formulas used to allot funding for everything from roads and schools to transit and public assistance.

Garcia said filling out the Census is “just a good impact for the tribal community.”

Navajo Nation Council Speaker Seth Damon stressed the importance of getting people to fill out their Census forms in a statement last week, as enumerators were returning to the field.

“Our main priority is to get every Navajo person counted by responding to the 2020 Census questionnaire as soon as they receive the information,” Damon’s statement said.

Navajo Nation President Jonathan Nez said this week that the nation’s 1.5 percent response rate so far “is very concerning.” But he blames the low rate in part on the spread of COVID-19 on the Navajo Nation, which has one of the nation’s highest infection rates per capita.

When multiple family members live in a house, he said, “this bug – the virus” can make it difficult to collect information if someone in the house becomes infected.

When enumerators took to the field last week in the areas around Window Rock – one of the last cities in the country to resume field operations – it was with special COVID-19 protections in place.

Mitchell said enumerators have badges, bags, and signs in their vehicles that all identify them as Census workers, all of whom are following social distancing and health guidelines set by the tribe. When they go to a house, he said, they hang a plastic bag containing the Census questionnaire on the doorknob and knock on people’s doors.

“We have no interaction with the household. We just leave the questionnaire and if somebody comes out, we just wave and hold your sign up, hold your bag up to show the Census symbol and hopefully people are aware census folks are around,” he said.

The virus has scrapped plans for events that would have helped people fill out the questionnaires, but people still have until Aug. 11 to answer by mail, phone or through the internet.

It’s a level of support that tribes did not always receive in the past, said Shannon O’Loughlin, executive director of the Association on American Indian Affairs.

“This is something that is historical – and why sometimes there are tribes that are not very good at responding,” she said. “Because in the past, there is a history of the U.S. doing Census numbers in order to basically count tribes out of existence.”

O’Loughlin acknowledged the challenges of pushing tribe members for Census responses during a pandemic, and suggested that’s why response rates have been low so far.

“Protecting the health and safety of tribes and individuals is more important than the Census at this time,” she said.

But she also said that answering the Census is a way for tribes to protect their communities, even as they grapple with COVID-19.

Nez said he is encouraging people to fill out the questionnaires through the weekly town halls where he gives coronavirus updates to the nation.

Mitchell agreed that it is important for tribes to increase their response rate so they can get the representation and funding they are due.

“That’s the hope – that’s my hope – is that we have a response rate that is respectable,” Mitchell said of Navajo participation.

Damon said it is more than just a hope for tribal leaders, it’s an imperative.

More information or to complete the 2020 census visit www.2020census.gov.