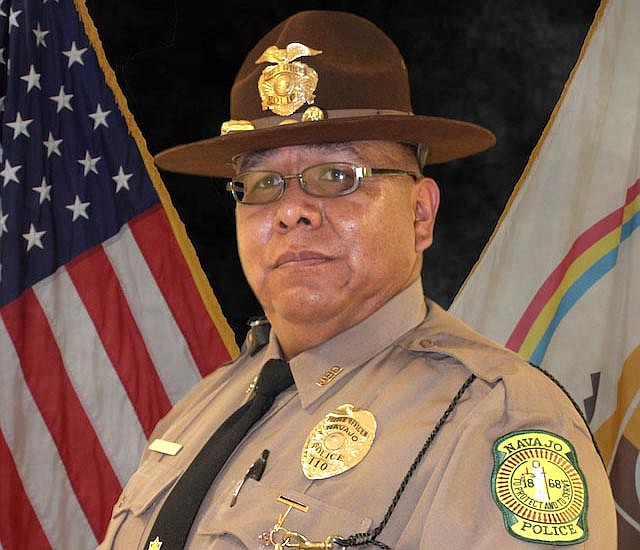 Navajo Police Chief Phillip Francisco said the department was “devastated and heartbroken" by the death of Officer Michael Lee, who died June 19 at Banner-University Medical Center Phoenix. (Photo/Office of the Navajo Nation President)

CHINLE, Ariz. (AP) — A Navajo Nation police officer has died at a Phoenix hospital, becoming the first officer on the tribal police force to die from COVID-19 in the line of duty, according to tribal officials.

Police Chief Phillip Francisco said the department was "devastated and heartbroken" by the death of Lee, whom Francisco called "a husband, a father, a son and a protector of his community."

Francisco asked that the public remember Lee for his commitment to his community and extend prayers to his family.

Tribal President Jonathan Nez and Vice President Myron Lizer said in a statement that Lee "fought on the front lines to combat coronavirus and we are grateful for his dedication to our community."

Gov. Doug Ducey tweeted that flags at all Arizona government buildings would be lowered to half-staff June 20 from sunrise to sunset.

Lee served 29 years with the tribal department, beginning his law enforcement career as a police recruit with the Navajo Police Academy in October 1990.

He initially worked in the Window Rock area and later in Chinle.

Survivors include Lee's wife and children, the department said.

His body was taken in a procession June 19 from Phoenix to a mortuary in Gallup, New Mexico.

The funeral service for Officer Lee will be held June 25, at 10 a.m. at The Potter’s House Christian Center in Chinle, Arizona and will be open to immediate family members.

The Navajo Nation Police Department will work to ensure all public health orders are adhered to for others wishing to pay their last respects to Officer Lee.

The Navajo Times newspaper has temporarily closed its office after two employees tested positive for COVID-19. CEO/Publisher Tommy Arviso Jr. said in a statement June 19 that all staff members at the Window Rock, Arizona, office have been tested and are awaiting their results.

Meanwhile, the office will be sanitized by a professional cleaning company and reopen July 6. The staff will work remotely and continue putting the newspaper out online.