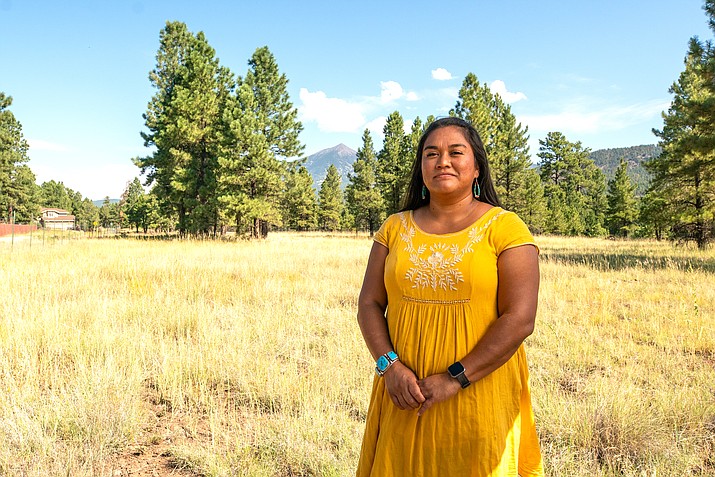 Nikki Cooley is a member of the Navajo Nation. She is from Shonto and Blue Gap, Arizona and is the first Navajo woman to be licensed as a full-time commercial river guide in Grand Canyon National Park. (Photo by Deidra Peaches, courtesy of Grand Canyon Trust)

Editor's Note: The following Q & A is the second in a series that will be published in upcoming editions of the Navajo-Hopi Observer. This series feature tribal members from the Zuni, Navajo, Hopi, Havasupai and Hualapai tribes who share what the Grand Canyon means to them as well as the history of the Grand Canyon from each tribal member's perspective.

Nikki Cooley, a Diné woman from Shonto and Blue Gap, Arizona, grew up herding sheep and planting corn with her grandparents. She had never considered river guiding as a career until a friend invited her on a river trip as an assistant. She’d have to help cook, clean, pack and hike out. It was hard work, Cooley’s friend warned repeatedly.

One trip, led to another, and Cooley soon became the first Navajo woman to be licensed as a full-time commercial river guide in Grand Canyon National Park. Here, we talk with Cooley about rafting, respectful visitation, and the outrageous questions passengers would ask her.

What does the Grand Canyon mean to you?

The Grand Canyon is a very spiritual place for the Diné. The waters that run through it, into it, those are often viewed as the lifelines of Mother Earth — the same way the blood lines run through our human bodies. That’s where a lot of our deities live, so there are a lot of ceremonies that are conducted there.

How did you feel the first time you went down the Colorado River?

I remember stepping on the boat and floating down the Colorado River and thinking how at home I felt. It was a part of me that had always been there, like a cousin that went away to college and came back and we picked up right where we left off. And it was a really powerful feeling in my soul, in my heart.

What cultural teachings prepared you for life below the canyon rims?

I was always instructed to make offerings everyday of corn pollen or of white corn meal to ensure that the river knew that I was respecting him, and her. That it wasn’t a playground — ya, I was having fun, but I was learning, and also respecting. I sang songs. And that set me on my life to being a commercial river guide for about 13 years.

What types of questions would your river trip passengers ask you?

I would often do talks at ancestral sites, and two questions would always come up: ‘I can’t believe people lived down here—why did they live down here?’ And, ‘I thought Native Americans were extinct?’ They were very serious about it. I had to remind myself that people were coming from very urban backgrounds, maybe having grown up in New York, or Sweden, or India — places where Native American culture, to them, was lore. It was John Wayne movies. After I talked to them, I hope they gained a sense that we are still here and that we’re not going anywhere. And I wasn’t afraid to talk about the sordid history of the American government. One of the questions I got too was, “I just really love your tan, how did you get that?” And she was very serious about that question. And she was tanning the whole time. So you get ridiculous questions like that but you can’t shut them down because they also need to learn.

Did you feel comfortable sharing your Diné culture while guiding?

I met river guides that would talk about my Diné culture to clients in the Grand Canyon, and I asked them, ‘Where did you get that information?’ And they said, ‘Oh I read it in a book.’ I knew that first hand teachings were more important than reading from a book and reiterating what that book said. So I really was outspoken about my cultural perspectives because I felt that the guiding community, and also our clients, and the Grand Canyon National Park Service — they needed to know and learn how important Native, Indigenous perspectives are and should always be included in every conversation.

What can the Grand Canyon teach us?

Do you have any tips for visitors to the Grand Canyon?

As visitors to these protected areas, remember that you should always ask, ‘Were there any Indigenous people, Native people, that used to live here?’ And if so, ‘Where can I learn more?’ There are Native and Indigenous park rangers at Grand Canyon National Park. Ask questions, and just be respectful. If you see a piece of trash, pick it up, because that is somebody’s home, whether human, or a plant or animal species’ home. Be mindful of those that are around you.