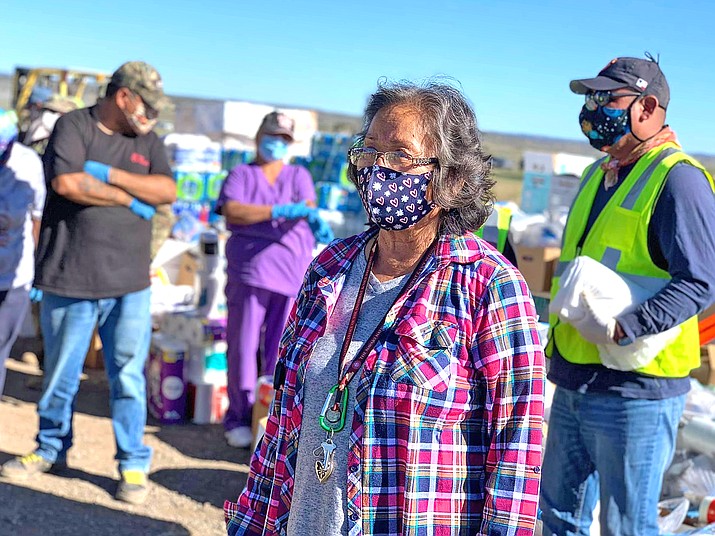 The communities of Crownpoint, Thoreau, and Rock Springs, New Mexico receive aid from the Nez-Lizer administration June 9. The New Mexico Army National Guard and Air Force National Guard also assisted, as well as many Community Health Representatives, chapter officials and others. (Photo/Office of the President and Vice President)

SCOTTSDALE – Federal funding has reached the Navajo Nation, and President Jonathan Nez is urging tribal leaders to move quickly to approve the distribution of $50 million in funds from the CARES Act.

The proposed legislation would help the tribe distribute services and equipment, Nez said in a virtual town hall meeting June 9. The legislation, which must be approved by the Navajo Nation Council, would fund crucial water infrastructure projects, personal protection equipment, hazard pay for Navajo workers and other services.

“We need your help,” Nez said during the virtual meeting. “Talk to your delegates.”

According to a petition in favor of the legislation, which had more than 600 signatures at the time of this story’s publication, the bill “creates a unified approach to developing plans for much-needed water infrastructure that will bring clean water to thousands of Navajo families, elders and high-risk tribal members.”

Navajo leaders also encouraged those living on the reservation to take care of the older population.

“We’ve spent $1.6 million on funerals,” Vice President Myron Lizer told the town hall. “We can’t just blame the government, we are all part of this.”

Lizer and Nez said caring for one’s relatives, especially older Navajos who are at higher risk for COVID-19 infection and complications, is the responsibility of the Navajo people.

“We have to shield them from this monster that is taking over our land,” Nez said.

As of June 9, the Arizona Department of Health Services reported 28,296 cases of COVID-19 and 1,070 deaths in the state. It said 409,174 tests for COVID-19 have been completed in public and private labs in Arizona, and 6.915 percent of tests have come back positive for the virus. To date, 5.7 percent of Arizonans have been tested.

Arizona has hit its highest seven-day average of new COVID-19 cases since the beginning of the pandemic. Nation-wide protests, relaxed stay-at-home limitations and reopenings could play a role in increasing numbers, according to The Washington Post. Data from the Post shows that although cases originally were rising in metropolitan areas, increases now are occurring in more rural areas. Because those regions have smaller population sizes and fewer health care resources, experts worry they will struggle to track and treat new cases.

First responders and law enforcement officials received free COVID-19 antibody tests last week. The tests come as part of a state-wide initiative to determine if those working on the front lines of the pandemic have developed antibodies for the COVID-19 virus. According to Arizona Daily Sun, the tests could not only provide the state with valuable information, but peace of mind to first responders.

Will Humble, who directed the Arizona Department of Health Services until 2015, told KTAR News an additional stay-at-home order may be needed to halt a further increase of COVID-19 cases. He voiced concern about the rise in cases since late May, and a lack of social distancing precautions undertaken by some on Memorial Day.

After an ongoing plea for answers from residents, Northern Arizona Healthcare officials met with reporters on June 4 to clarify that they do not have plans to leave Sedona despite financial pressures from COVID-19, according to Sedona Red Rock News. The virtual talk with reporters came after sources suggested the hospital would limit services at its Sedona Emergency Department.

How to help the Navajo and Hopi reservations

The Navajo & Hopi Families COVID-19 Relief Fund has raised more than $4.7 million to help support Navajo and Hopi communities since it was created March 15, according to a press release. Donations made to the group’s GoFundMe page are used to purchase healthful foods and cleaning supplies. The nonprofit offers regular updates on its GoFundMe and social media pages.