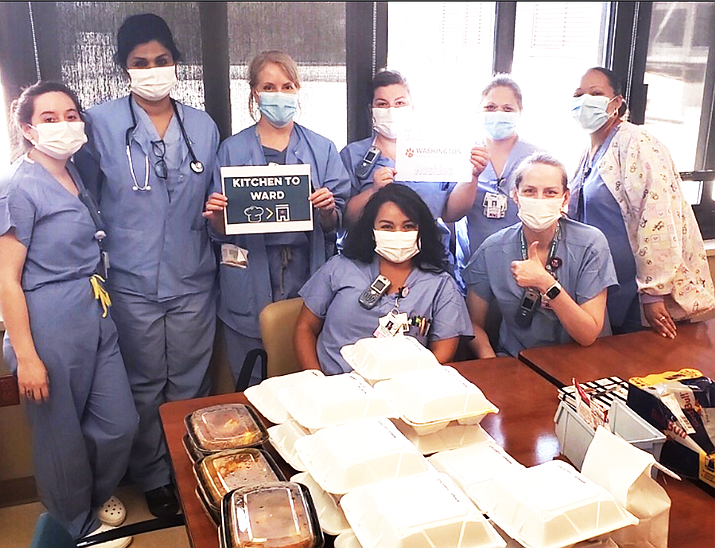 FLAGSTAFF, Ariz. — A non-profit, Kitchen to Ward, created by Aayush Kabra, is not only helping bring food to Tuba City Regional Health Care Corporation, but is also helping local restaurants become part of helping to feed hospital staff during the pandemic.

A high school student, Kabra, created Kitchen to Ward during his spring break when he was at home during the shelter-in-place order in California. Kabra said he had time on his hands and was bombarded with a ‘constant barrage of negativity on the news day after day.’

“I knew I wanted to help people in the COVID-19 situation in any way I could, even if it was just virtual, as I couldn’t just sit home and not take action,” Kabra said.

He had heard that hospitals and other healthcare centers, like nursing homes, were overworked and understaffed and restaurants were struggling to stay in business.

Aayush Karba sits in front of the Kitchen to Ward website he created while on spring break during a stay-at-home order in California as the COVID-19 pandemic took hold. (Photos courtesy of Kitchen to Ward)

Kabra came up with the idea of creating a website where anyone who wants to donate can select a location and hospital to donate a meal to. The entire contribution is used to order meals from a local restaurant and have them delivered to a partner hospital.

“What makes us special, I guess, is that instead of making a general donation, donors know exactly when the meals will be delivered and which hospital ward or section the request comes from,” Kabra said.

Over the past month and a half, Kitchen to Ward has partnered with 10 hospitals, raised over $3,000 for meal donations and donated close to 300 meals.

To find hospitals to initially partner with, Kabra looked for places that were overlooked and not receiving media attention, even while being hit hard by the pandemic.

“I wanted to find places that were hot-spots…or places that are still bearing the brunt of the pandemic…,” Kabra said.

When Kabra learned that the Navajo Nation had the highest per capita infection rate in the United States and wasn’t receiving much aid, he knew he wanted to help make the region a priority.

He and his partners started contacting hospitals in the area. Tuba City Regional Health Care Corporation (TCRHCC) was the first to reach back out to Kabra and a partnership was formed.

Loretta Carpenter, a registered nurse in the operating room at TCRHCC, said there are several people who help coordinate donations like this one, including a calendar, which helps to make sure donations do not overlap. The hospital has a break set up for staff where they provide two meals a day – one at 11 or 12 o’clock and one at 7 p.m. for the night crew who wander in during breaks to get something to eat.

Kitchen to Ward not only helps staff eat at hospitals, but it also helps local small businesses like restaurants, which were struggling to survive during the shelter-in-place orders across the nation and on the Navajo Nation. Kabra heard that some restaurants that were in more stable financial condition were making their own meal deliveries.

That sparked the idea that Kitchen to Ward could be regular customers for those restaurants, providing them necessary assistance — even if it wasn’t enough to fully compensate for the loss of regular foot traffic.

“It has been absolutely fabulous,” Carpenter said. “Kitchen to Ward has been using local restaurants here in Tuba City to donate the food, which helps our economy as well as well as helping the staff here. It’s been great. They’ve been wonderful.”

Kabra partnered with five other high school students, three of them in the same school district as him outside of San Francisco: Anika Potnis, Aaron John and Renesh Gudipati. Two others live in North Carolina near Raleigh: Arnav Chugh and Yogesh Koppu.

Kabra is also an Eagle Scout, and some of his fellow Boy Scouts are interested in joining the team as well.

“Besides expanding to hospitals, we also plan on assisting other healthcare centers like nursing homes and senior care centers, who we know are short on resources… as far as receiving help,” Kabra said. “We also are looking into helping the nurses who run the COVID-19 testing centers as well.”

Individuals wishing to donate can go to www.kitchentoward.org and select a hospital to donate. They are then sent to a separate sign-up page where they can sign up for a meal request slot.

Hospitals or restaurants that are interested in becoming part of the program can email Kitchen to Ward at kitchentoward@gmail.com or call (510) 449-4920.