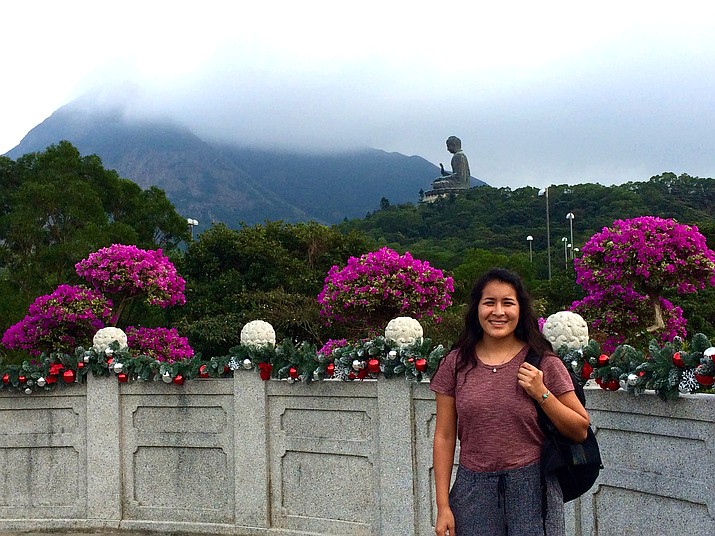 FLAGSTAFF, Ariz. — Jayne Sandoval grew up in Ute Pass Valley, a small area of the Navajo reservation in northern Arizona that had been passed down in her family for generations. But it was more than just the place she was raised — it was where she learned to connect with her Native American culture and the Earth.

Because of her fear of gang violence and growing drug problems surrounding her community, Sandoval’s single mother sent her and her siblings to a reservation boarding school in Shonto to ensure a quality education away from negative influences.

“Being sent away taught me independence, yet I grew distant from my Navajo culture and became interested in the technology of modern life, thus creating conflict and confusion in my identity as a young Navajo woman,” Sandoval said.

Feeling lost, she wanted to find a way to reconnect with her culture, but wasn’t sure how to do it.

Growing up, Sandoval wanted to be many things —she was set on being a basketball player; then an artist. When she was in middle school, she attended a summer computer-aided drafting program at Northern Arizona University and then and there decided this is what she wanted to do with her life, this is where she wanted to do it and this was how she was going to reconnect with her culture.

The decision to enroll at NAU nearly a decade later as a dual major studying mechanical engineering and comparative cultural studies stemmed from wanting to help her community. Returning home on the weekends made her more aware of the hardships Native Americans face. She saw how poverty was reflected in her community and heard stories about other struggling rural Native communities throughout the U.S. and Canada.

“For years, the Navajo Nation’s lands have been taken, exploited and destroyed to develop power sources that are not sustainable,” she said.

Experiencing this exploitation first-hand and observing the effects of climate change motivates Sandoval to find reliable and sustainable energy sources for the Navajo people.

“As Native Americans, we are closely connected to our land, so I want to contribute to indigenous communities as an energy engineer, implementing renewable energy to protect against further destruction of our sacred homeland,” she said.

NAU afforded Sandoval many opportunities. Not only did she receive a high-quality education that would allow her to give back to her community, she also had the opportunity to take part in the Interdisciplinary Global Program (IGP), making her the first in her family to go abroad. Minoring in Chinese and mathematics, Sandoval had the chance to study in China for a year — an experience that broadened her perspectives of other’s heritage as well as her own. 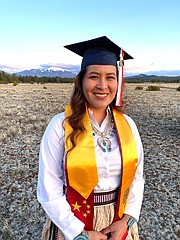 “There was time when I was abroad that culture shock took a huge toll on me during my first few weeks. I was sad, angry and confused,” she said.

While exploring an underground mall in the city of Guangzhou, Sandoval came across a group of First Nations Native Americans from Canada dressed in their pow wow apparel. She said her heart was filled with emotion. As soon as they came close.

“I introduced myself to them and almost cried trying to explain why I was in China,” she said.

As she vented her feelings, the group offered a prayer and sage for her.

“Before I left for China, I was slowly opening to the Navajo culture, but at that moment I truly believe there was something, someone looking over me,” Sandoval said. “Running into other Native Americans, in the middle of a mall in a huge city on the other side of the world, was everything I needed at the time. I was rejuvenated and reminded of my purpose in China to learn and grow from the new experiences I would have later.”

Sandoval credits her international experience as the foundation for how she’d like to carry herself in the future: an engineer with strong connections to her Navajo culture.

“I would not have found this within myself if it was not for NAU’s IGP and their staff.”

Sandoval, a Gold Axe winner who graduates this week as the second in her family to earn a college degree, has big plans after graduation. She was one of two NAU students to be named a Fulbright Scholar — a prestigious award that offers research, study and teaching opportunities in more than 140 countries to recent graduates and graduate students.

She said studying in Asia expanded her knowledge by forcing her to learn through different lenses and challenged her to exceed her own learning expectations.

Sandoval plans to continue her education through the Fulbright program in Taiwan to study for a master’s in energy engineering at National Cheng Kung University.