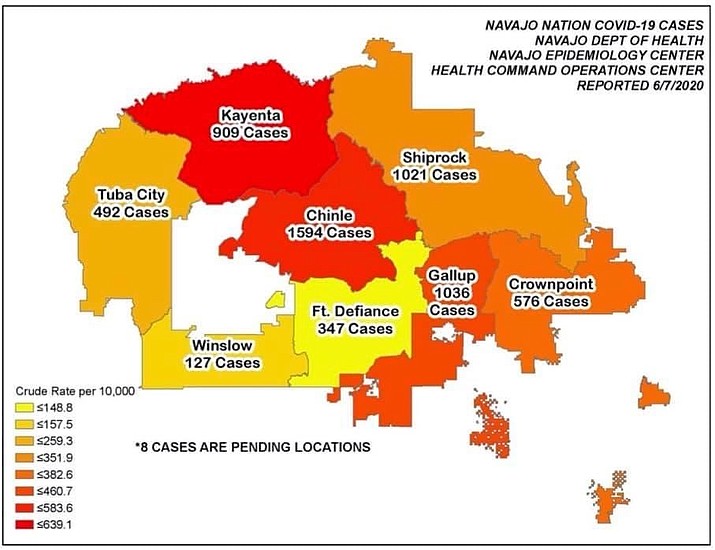 PHOENIX — Navajo leaders canceled this year’s Fourth of July celebrations in Window Rock as the tribe continues to grapple with the COVID-19 pandemic.

President Jonathan Nez announced the cancellation June 3 during a Facebook Live town hall in which he also lifted the 57-hour weekend curfew “unless we see numbers increase once again for coronavirus cases.”

In addition, the reopening of businesses has been pushed from June 8 to July 5, which will give the tribe more time to clean buildings, get employees tested and get stocked up on personal protection equipment, according to a new executive order from Nez.

The 57-hour curfew has been implemented on the reservation every weekend since April 10. However, Arizona’s statewide curfew, enacted May 31 in response to the protests over the death of George Floyd, remains in effect until June 8.

The vast Navajo reservation has been particularly hard hit by COVID-19. To date, Navajo health officials report 6,020 positive cases of COVID-19 and 277 confirmed deaths. Preliminary reports from 11 health care facilities indicate that approximately 2,727 individuals have recovered from COVID-19, with one health care facility report still pending as of June 8.

Arizona health officials reported 1,127 new cases of COVID-19 June 2, a one-day record. Officials have previously said numbers often surge on Tuesdays because it’s the day officials catch up with weekend reporting. However, the new figure is a considerable surge over the previous record, 790 cases reported May 30.

A preschool in Gilbert is taking strong precautions after a child attending the school was diagnosed with COVID-19, ABC 15 reports. Little Sunshine Playhouse and Preschool alerted parents last week, and school leaders have pledged to have the building professionally disinfected and cleaned.

Park along with other parks in the Four Corners region. Cronkite News reports that they argue the partial reopening is rushed and now is not the time to relax shutdowns at places with high public activity. In light of President Donald Trump’s plan to reopen American businesses, Interior Secretary David Bernhardt has been visiting national parks around the country to discuss reopening with the park officials.