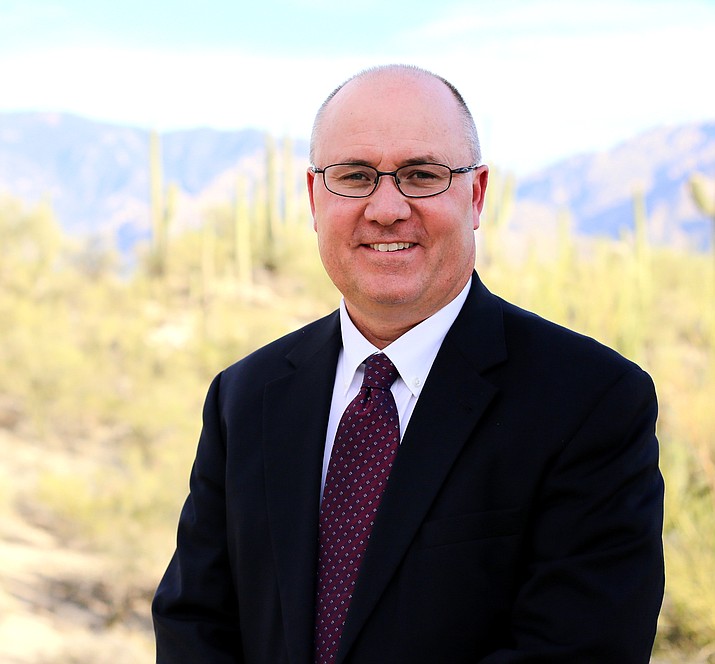 Nolan Reidhead is running in Congressional District 1 in the Aug. 4 primary. (Submitted photo)

FLAGSTAFF, Ariz. — Nolan Reidhead will face Tiffany Shedd in the Congressional District 1 Republican primary Aug. 4. The winner will go up against the winner of the Democratic primary, either incumbent Rep. Tom O’Halleran or Eva Putzova.

Reidhead said the top three issues in Congressional District 1 are dealing with the COVID-19 pandemic, improving the economy and dealing with police reform.

Reidhead, who has had a law practice in Tucson for 22 years, said the top priority is protecting people during COVID 19. He said people need to be safe and secure.

“We need to work together to show we’re safe. I’ve been watching what’s happening on the reservation. This is not the first time and I hope we learn from it,” he said. “We need to be prepared with PPE equipment and pharmaceuticals. We cannot be too dependent on China.”

Reidhead said the federal government has a role in dealing with the pandemic, but that role should be limited within the states.

“Those decisions should be made at the local level,” he said. “Funding can be had at the federal level. I’m baffled why some funding to tribes has been held up. The funding should be allocated by the local community. States can learn from this and be better prepared, but the federal government should help with funding.”

“Some people are tested more than once, but counted for each time,” he said.

Reidhead said the question is, ‘What can the federal government do to help the Navajo Nation with the coronavirus outbreak?’

“In Europe some countries are backing away from it. Is that proper for the U.S.?” he said. “I don’t know.”

Reidhead said a major step to improving the economy would be eliminating the payroll tax for at least a year.

“As we come out of this, we need to get jobs and businesses going again,” he said. “We can work with individuals to build businesses. We need to help employers with cash flow.”

Reidhead said visas for foreign workers need to be cut so those jobs can go to Americans. He said members of both parties should work together for the good of the people. He said other actions that can be taken to improve the economy are continuing loans to businesses for a longer period of time and to allow people to get into their 401K without paying taxes on them.

“It’s crucial to get the economy going,” he said.

Reidhead said supplying rural areas with infrastructure is a huge issue, especially making sure the rural areas have enough water, electricity and roads. He said this makes it important to fund technical colleges so people can get jobs quickly with the proper training. He also supports having a law school on the Navajo Nation.

Reidhead said police reform is needed following George Floyd’s death. He said Floyd’s death was a travesty, but he said the loss of Navajo Police Officer Michael Lee was also a travesty.

“There are good officers on the front line,” he said about police officers, border patrol agents and corrections officers.

Reidhead said he is aware of problems with police after he had a cousin shot during a traffic stop in Phoenix. However, he said 99 percent of police serve with the intent of serving the community. He also added that there are some bad apples and better training for hiring and background checks is needed.

Reidhead said some police were brutal in their conduct and had many prior complaints about their brutality.

“Those need to be fired and should not be in a supervisor’s role. Each year, police need to be updated on issues, just like many other professions,” he said referring to annual trainings he has as a lawyer.

Reidhead said proper reforms need to be approved, but lootings and tearing down monuments are not acceptable.

Reidhead said he is pro-life and for constitutional rights.

Regarding police reforms, Reidhead said there were a lot of protests that were reasonable, but called the looting and taking over of a police precinct in Seattle improper.

“It destroys the message,” he said.

Reidhead said Martin Luther King’s demonstrations were done the proper way as they were responsible and peaceful. He supports law enforcement working on crossover jurisdiction to cut down on drug and human trafficking.

Reidhead said 2020 has not been good to the tribes with the closure of the Navajo Generating Station in Page and then the coronavirus outbreak.

“Every household on the reservation should have running water and electricity,” he said. “We need to allocate it properly.”

Reidhead said the reservation needs more air ambulances because everybody is spread out over wide areas of land.

Reidhead, whose family was involved in the logging industry, supports uranium mining if it can be done safely and he believes that can be done.

“I worked with government agencies on the Kayenta mine and it was done safely,” he said.

Regarding schools, Reidhead has a 16-year-old and he is waiting to see how the school district will approach the new school year. He said education decisions should be made at the local level working with family and teachers, but he added the federal government can help with funding.

“We need to keep education going. I think we can open in a responsible way,” he said.

CD1 is large and varied

Reidhead said CD1 is a huge district with varied interests from Page to Tucson. He knows the district because he has relatives and friends spread throughout the district. For over 20 years, as a lawyer who works with business startups he has worked with many people in the district. He has also worked as an arbitrator with the courts for seven years.

“It’s important to work with varied interests to come up with proper solutions,” he said.

Reidhead said he wants to serve in Congress because the nation is at a crossroads as he seeks to support traditional and small town values. He said the Golden Rule still applies.

“I see politicians who are in it for themselves,” he said. “We need those who are not lifetime politicians.”

Reidhead said CD1 and rural areas have been forgotten by Congress in the past.

“Navajo County is still waiting for money,” he said. “I want to work for the communities.”

Reidhead said he wants to bring compassionate and strong leadership to protect the rights and interests of citizens.

Reidhead said his political role models are Abe Lincoln and Martin Luther King. Lincoln because he was determined despite strong odds and King because he gave his life for his cause.

Reidhead said the primary election has been complicated by the COVID 19 causing a lot of events to be cancelled. He said this has made it harder for tribes to reach out to Republicans. He said health issues and the Second Amendment brings the tribes and Republicans together.

“I think we can do better by our people,” he said.

This is part four in a four part series that features interviews with congressional candidates running for District 1. District 1 encompasses the Navajo and Hopi reservations.