Washington NFL team kicks out R-word; ‘A long journey and many sacrifices’ 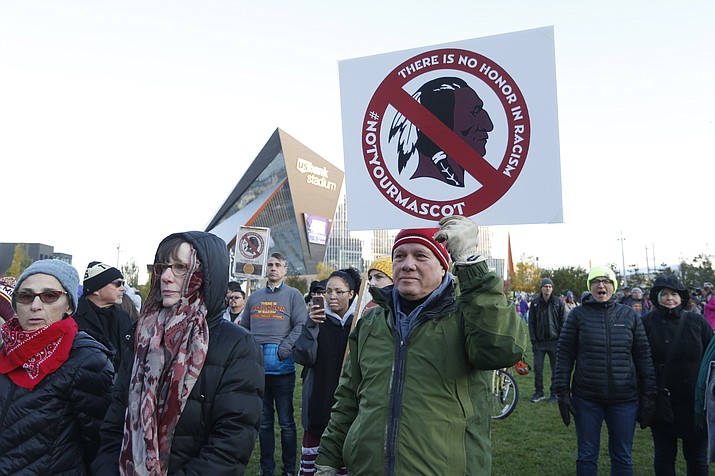 Native American leaders protest against the Redskins team name outside U.S. Bank Stadium before an NFL football game between the Minnesota Vikings and the Washington Redskins in Minneapolis on Oct. 24, 2019. (Photo/Bruce Kluckhohn, Associated Press)

WASHINGTON — The Washington NFL franchise announced July 13 it is retiring its team name and logo, a fight Native activists have been leading for decades.

The franchise is developing a new name and design under the direction of team owner Dan Snyder and head coach Ron Rivera.

“On July 3rd, we announced the commencement of a thorough review of the team’s name,” the team said in a statement. “Today we are announcing we will be retiring the (deleted) name and logo upon completion of this review.”

The team gave no timeline on when a new name and logo will be released. Spokesman Sean DeBarbieri told Indian Country Today in an email, “We won’t be commenting until the full process has been completed.”

The fight to change Native-themed mascots began in the 1970s and has since been largely led by Native women including Suzan Harjo, Hodulgee Muscogee and Cheyenne. It was carried into 2020 with the help of Amanda Blackhorse, Diné, Crystal Echo Hawk, Pawnee, and many others.

Harjo, after hearing the news, rang praise for those who fought for the change over the years, saying it was brought about by Native people and allies and should not be attributed “to a change of heart by the team’s energy.”

“We’ve ended more than two-thirds of these obscenities and now have only 900 or so left to go, but the fall of this king of the mountain of trash will help others to give up their ghosts of racism even faster, so, Aho, Mr. Snyder and thank you, Mvto, Mr. Fred Smith,” Harjo said in a statement.

She said news outlets need to stop printing the racial slur in headlines and story text.

“Shame on them,” Harjo said. “We have eliminated over two-thirds, that’s over two thousand of these [Native mascots] from the landscape of American sports, and that is a societal sea change.”

“What we are demanding though, are these vestiges of that racist history, and that includes all of these mascots and names, whether they’re racist stereotypes or whether they’re cultural appropriation, we want them all gone from American sports,” she said. “We were not going to be the recreation, the entertainment. We’re not going to be dancing for the white man anymore. That’s the end of that.”

“Its been a long journey and many sacrifices have been made,” Blackhorse tweeted. “Rest in Power George Floyd, Breonna Taylor, Ahmaud Arbery & many others. #BlackLivesMatter! We still need justice for Breonna Taylor! Thank you #BLM for creating awareness, this means so much to Indigenous ppl!”

Fans of the team shared their reactions, too.

Some posted pictures wearing jerseys and other apparel with captions including “one last time.” Others noted “today marks history” and said they were saddened but excited for a fresh start.

“As a kid who grew up in the dmv [District of Columbia, Maryland and Virginia] it’ll always be #HTTR but looking forward to the future,” Haskins tweeted.

President Donald Trump suggested in a July 6 tweet that Native people would be upset with the name change.

On July 13, his press secretary, Kayleigh McEnany, doubled down on the president’s thinking during a press briefing. McEnany cited a debunked Washington Post poll from 2016 that said 90 percent of Natives were not offended by the team name.

In the years since that poll was released, new studies have come out that show Native people are “deeply insulted” by the team name.

Pressure in 2020 began mounting as George Floyd’s death in Minneapolis spurred the crashing of racist symbols of all kinds across the country, including the Washington NFL franchise.

On June 26, a group of 88 investors representing more than $620 billion in assets sent an open letter to FedEx, Nike and PepsiCo calling for them to terminate business and public relationships with the team until the racist team name is changed.

Shortly after, the franchise said it would undergo a “thorough review of the team’s name.”