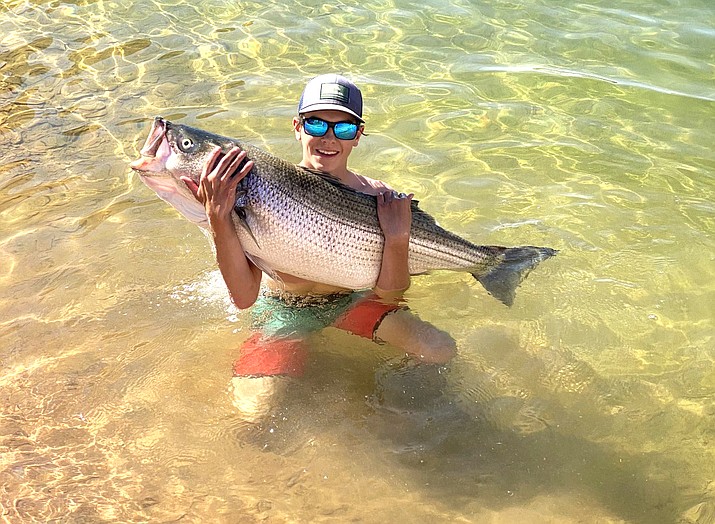 Lake Powell is still hot and busy with lots of people coming to this great vista in these difficult times. There are many boaters, recreationists and campers. The best part is the fishery that never seems to disappoint. Here is the most recent story of fishing success.

Jack Davis was camped in Grotto Canyon with is family while enjoying boating, swimming and camping on the lakeshore. Jack likes to fish so he brought his 9 Weight fly rod along. He was casting his sinking line out as far as possible and then stripping the line back in, hoping to catch a fish on his black homemade fly. Fishing was slow without much interest from bass or other fish species as he walked the shore near his camp. After many casts to shallow water, Jack thought that he should let the fly sink down much deeper in hopes of catching a fish in deep water. He cast out as far as possible and then let the sinking line drag the fly down as deep as possible. Then he patiently waited hoping for the bite. It took a long time, but it finally happened. A fish grabbed his fly. The fish was strong and would not leave the deep water. Jack hung on and played the fish as it swam in the depths. Ten minutes passed. Then 15 minutes as Jacked continued to hold the rod high and tried to gain a little bit of line. After 20 minutes, the fish began to come to shallower water. Finally, at 25 minutes the fish came to the surface and rolled over. It was a huge striper. Jack was able to wade out, grab the fish by the mouth, and drag it to shore. Jack hoisted the big fish up on his shoulder and walked it back to camp. His family was amazed to see Jack carrying a monster striper back to camp. The fish was 43 inches long, which equates to 25-30 pounds. Great Fish Jack!

Fishing for the rest of us is still good early and late. Mid-day is busy and hot. Look for surface activity at first light in the morning. Cast surface lures to bass rising on the shoreline. Striper slurps/boils can blast up anywhere, but are much more likely to happen in the northern lake. Full boils are erupting from Buoy 110 all the way to Good Hope Bay and beyond. Recently the slurp/boils were mostly from smaller stripers feeding on small shad. Timing is random. Boils occur when stripers find a shad school in open water. Stripers surround shad, push them to the surface and then eat as many small forage fish as possible. Larger adult stripers were caught trolling in deeper water, usually at 20-30 feet. Bait fishing is working but fishing is not fast.

Smallmouth bass continue to strike plastic grubs along rocky shorelines. There will be some surface action for bass early in the morning, when water temperature is at its lowest point for the day. Remember most fish are down below 20 feet where water is cooler and more comfortable. In these hot times, even warm water fish seek comfortable water, which is 68-74 F. They come shallow quickly for a feeding opportunity and then drop back down to their happy place to wait for more forage to swim by. Bass are really happy to see green plastic baits invading there comfort zone and are quick to bite at the right time and place. Keep trying until you find that spot.

Catfish are active at night. They really like leftovers from your evening meal. Put a hot dog round, angleworm, or some other bait on your hook and cast out to the sandy bottom right behind your boat. These fish will find your spot. Some really big catfish have been caught recently. Fishing in the dark is a lot cooler than during the day.

There are many options for fishing at Lake Powell, even in the heat of summer.