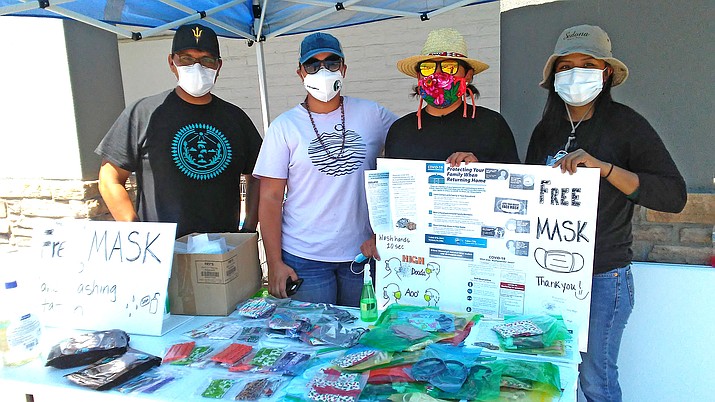 PAGE, Ariz. – The title 'front line worker' and 'essential worker' is synonymous with people who have created a barrier between the public falling prey to the novel coronavirus pandemic (covid19) and surviving it.

No one would have associated ‘fashion designer' as part of the structure of support for the front line's needs, yet they’ve been there in the wings as the pandemic began ravaging the Navajo Nation and Personal Protective Equipment stockpiles came up empty. Native American fashion designers, without hesitation, tore away the labels, put their spring line aside and their sewing machines hummed in steady rhythm to get PPE to the frontlines.

On March 7, the first case of COVID-19 on the Nation was documented when a church gathering exposed 18 people from seven chapters. Without proper information, or an emergency plan in place, hospitals were unaware of how to diagnose the symptoms of the first victims. The amount of people exposed after three days caused the Army National Guard to set up a makeshift clinic in Chinle by March 29. Three days was enough to make the Nation the number two hot spot in the country for cases per capita by mid April and by May 18, it was number one. The skillset to make an impact rested in the hands of the Native fashion community.

Jennifer James of JJamesz designs from Shonto, Arizona was aware of the virus in November 2019. 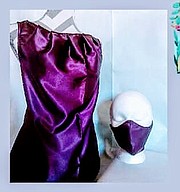 "We have a son in the marines stationed in Japan. He already told us that China

had a virus. We didn’t take it seriously, then, thinking it would only be China. In February that’s when we heard it spread all over the world,” she said.

James said she realized then why it’s commonplace to wear masks in Asia.

“"I said to myself, 'Now we are going to need to wear masks, too.’ That's when I started sewing masks to protect my family and posting on social media,” she said.

It wasn't long before people in her community started asking her for masks. Employment dropped and James knew money was scarce so she asked for donations. She said it isn’t about the money.

“If they can’t afford it we try to work it out,” James said.

When she found herself swamped with orders, donations helped with supplies.

“It was hard because I have little ones. I would make [slow cooker] meals or if I was alone, something quick,” James said.

While necessary, she knew the project lacked moral support.

James noticed other designers were also sewing masks and reached out to them with an idea to form the ‘Warrior Protectors,’ a support network of Native American fashion designers. Their self isolation provided a new alternate solution to saving lives. They posted tutorials to sew masks and started filling big orders that came directly from reservation medical institutions and nursing homes. By July followers and contributors hailed support globally.

Loretta Seweingyawma of Whiteshell Woman Designs from Tuba City understood what was needed to protect her family. Her home community, Gap/Bodaway chapter, is even now without running water or electricity in nearly half the homes. She asked the chapter council what the emergency plan was to address this, but to her disappointment there was no plan.

“My mother doesn’t have running water and it’s [frustrating]. They just need to get the water lines fixed. But they make things personal and... seem to crave a fight,” she said. “We have had a lot of families pass away because of [no water].”

These problems scared Seweingyawma. She decided to sew masks for her whole family despite backlash from the public.

“Then my mom would ask for masks every time I saw her. Around the 20th of March panic hit hard,” she said.

Seweingyawma said the amount of requests for masks doubled. Providing her community, PPE was in turn protecting her family, who is more at risk without working water lines.

“Being a designer I have an addiction to buying material so I had a garage full of cloth. So when Jennifer reached out to me I told her I had a whole bunch of elastic,” she said laughing at herself. “I thought, ‘What better way to save lives and help other people?’”

Seweingyawma credits her family with providing support and help with the project.

“My daughters, son and daughter in law, [Hillary, Jackie, Sidney and Theresa], cut out the patterns,” she said. “We have about 1,000 cut out now. Without their help I wouldn’t be able to do this."

She cannot estimate how many she’s sewn since March but always carries a stash of masks for elders or children. With more people sewing masks Seweingyawma now has some time for custom orders such as nurse scrubs that match facemasks.

Cynthia Trujillo of Designs by Cynthia from Fruitland, New Mexico was also sewing masks for family and hospital staff since March. She made a donation to John Hopkins in Shiprock, New Mexico when she learned of the PPE shortages.

“People were washing their disposable masks for a month when they asked me to make [cloth masks],” she said. “This is still happening.”

Trujillo knew joining Warrior Protectors was a way to meet the demand for PPE when positive COVID-19 cases spiked to incomprehensible levels.

“There are stories everywhere about people still not being reached, not just with face masks, but food and water,” she said. “This virus is not stopping soon. Whole families are gone.”

Trujillo hopes that people who don’t want to wear a mask, will.

“Masks really do help. Asymptomatic people have it and the masks protect others,” she said. “We still need to be vigilant. It really hurts me to see our elders [passing away]. We’re losing all their knowledge — that is a big thing.”

"The pandemic left many of us unprepared… or on a teeter totter of information of do's and don'ts. It has strained our mental and physical beings," Tallsalt said. "The Warrior Protectors put their skills to the test... sewing masks or volunteering their time to hand out food boxes. It’s humbling to see people working together to flatten the curve."

When asked if they saw themselves as heroes they each laughed with a unified, "no."

“I just want to do my part to get through this pandemic. I'm doing my duty as a member of the community," Seweingyawma said.

Many more volunteers have joined the Warrior Protectors; Mae Mallahan, Felix Earle, Enoch Endwarrior, Jolene Chee, JG Indie, among others. Warrior Protectors are helping to fill requests with other designers from California to New York and have turned basic safety into a fun and colorful statement that has shaped a new couture, a “viral trend” on social media.

Now the sound of sewing machines are humming across the country and the Native American fashion scene paints the desert with colorful masks that reflect solidarity.