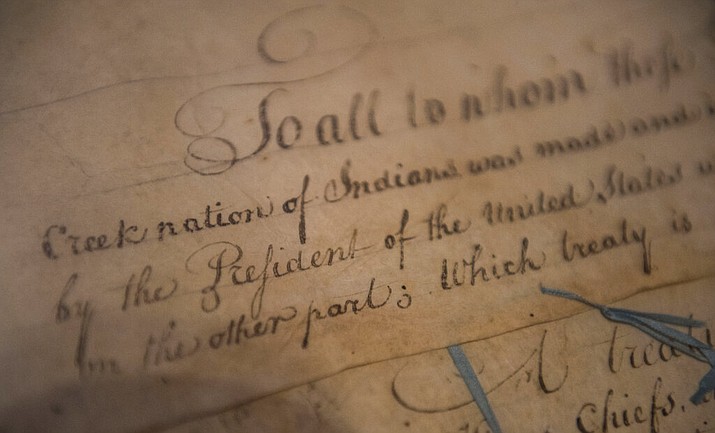 FILE - This March 16, 2015, file photo, shows a detail of the 1790 Treaty of the Muscogee (Creek) Nations and the United States non display at the Smithsonian's National Museum of the American Indian "Nation to Nation: Treaties Between the United States and American Indian Nations" in Washington. The Supreme Court has ruled Thursday, July 9, 2020, that Oklahoma prosecutors lack the authority to pursue criminal cases in a large chunk of eastern Oklahoma that remains an American Indian reservation. The case was argued by telephone in May because of the coronavirus pandemic. The case revolved around an appeal by a Native American man who claimed state courts had no authority to try him for a crime committed on reservation land that belongs to the Muscogee (Creek) Nation. (Kevin Wolf/AP Images for Smithsonian's National Museum of the American Indian, via AP, File)

WASHINGTON — In a decision being hailed as a win for tribal sovereignty, the U.S. Supreme Court ruled July 9 that a large portion of eastern Oklahoma remains a reservation.

In the 5-4 decision, the nation’s highest court said Congress never explicitly disestablished the 1866 boundaries of the Muscogee (Creek) Nation.

“Today we are asked whether the land these treaties promised remains an Indian reservation for purposes of federal criminal law. Because Congress has not said otherwise, we hold the government to its word," according to the majority opinion written by Justice Neil Gorsuch.

Jonodev Chaudhuri, an ambassador with the Muscogee Nation, said the decision is a huge win for Indian country and a profoundly impactful day for the tribe.

“Many folks are in tears,” Chaudhuri said. “Despite a history of many broken promises, as is true with many tribal nations, the citizens feel uplifted that for once the United States is being held to its promises.”

According to Chaudhuri, the decision provides jurisdictional clarity and the tribe will continue to work to improve the health, safety and welfare of tribal members and non-tribal members alike.

“(The) Creek Nation has a long history of working with its local, state and federal partners to protect the interests of all people in its boundaries and the clarity brought by today's positions will only enhance that,” he said.

In a joint statement, the Oklahoma congressional delegation said they are reviewing the decision and are ready to work with tribal and state officials. The group of legislators want to ensure consistency and stability in the application of law and bringing criminals to justice.

“Indeed, no criminal is ever exempt or immune from facing justice, and we remain committed to working together to both affirm tribal sovereignty and ensure safety and justice for all Oklahomans,” the delegation said.

Fawn Sharp, Quinault and president of the National Congress of American Indians (NCAI), joined much of Indian Country in voicing support and congratulations to the tribe for their historic win.

“This morning, NCAI joins the rest of Indian Country in congratulating the Muscogee (Creek) Nation and proudly asserting that its lands remain, and will forever be considered, Indian country – as guaranteed in their treaty relationship with the United States,” Sharp stated.

“As we move forward addressing longstanding broken promises, this decision will serve as a marker to ensure the federal government honors its promises to Native Nations,” Haaland said.