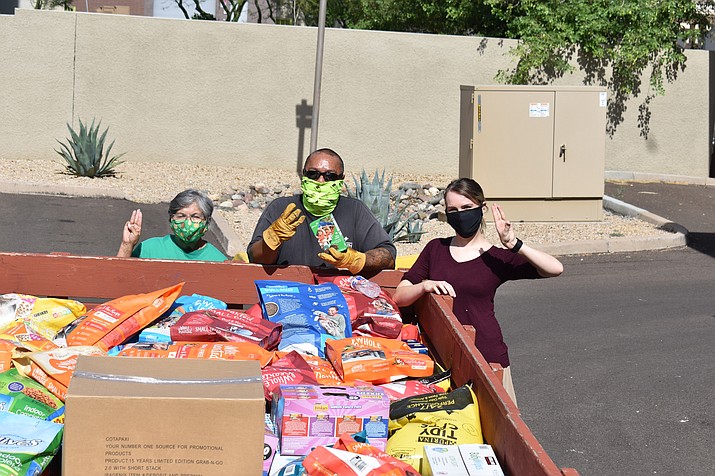 A box of donations sent from Glendale Girl Scout Troop 2232 to Pinon Girls Scout Troop 1430. Donations were spread out throughout the community of Pinon and surrounding areas hard hit by COVID-19. (Submitted photo)

PINON, Ariz. — They’d never met, but a girl scout troop from Glendale, Arizona initiated and promoted a donation drive with the help of Girl Scout Troop 1430 in Pinon, Arizona, to collect supplies to be delivered to the Navajo Nation and to the Hopi tribe during the coronavirus pandemic.

Glendale Troop 2232 of Girl Scouts – Arizona Cactus-Pine Council (GSACPC) delivered 5,000 pounds of pet food and a variety of cleaning and personal care items in just under four weeks to donate.

Because of COVID-19, areas on the Navajo Nation and the Hopi Reservation are under curfew and emergency orders, which limits the ability to purchase and deliver supplies.

“After communicating with Girls Scouts and volunteers living in these communities up north, we learned that the most in-need supplies were pet foot and care items – paper and cleaning products. We decided to use a portion of our money from cookie sales to benefit the areas with a service project,” said Troop 2232 leader Kristin Vanderwerf.

Another effect, was galvanizing Ellaree Meade, Pinon Girl Scout Troop 1430, to further the call for fundraising and organizing the delivery of donated items from the Glendale troop and other places around the country.

Pinon Unified School District sponsors a Girl Scout troop for every grade level (K-12) as part of its after school program. There are 13 Girl Scout troops serving about 120 girls.

Ellaree’s troop was the first troop the school district and her mom, Pamela, started with another teacher — the troop is starting high school at ninth grade this year.

When Pamela, who has been involved with the GSACPC for eight years, was contacted by the Glendale troop, she knew that she wanted to bring her troop into the effort, too.

“Since it was a girl project in Glendale, have the girls here in Pinon for the Navajo Nation to represent that,” Pamela said. “So, my daughter started working with the Girl Scout troop and created a YouTube video they could attach to their fundraising drive.”

Ellaree is also the princess of the middle school, and while not Navajo, was able to do a Navajo-speaking call out to people who might be interested in helping to donate.

“[Ellaree] started doing fundraising here on our end on the Navajo Nation to connect with the Glendale folks,” Pamela said.

Ellaree is currently earning her Silver Award, which is one step toward the Gold Award — the equivalent of the Eagle Scout for Girl Scouts.

She has also been able to collect more donations outside of what the Glendale troop donated as well — donations came from Santa Fe, New Mexico, a Girl Scout troop from Massachusetts, a college in Kansas and other local donations.

“Glendale definitely started this with wanting to do pet food donations and then Ellaree picked it up and spread the word even further,” Pamela said. “I think we doubled the amount of donations that we got from Glendale from other organizations.”

During a normal year, Ellaree said her troop usually meets one day a week to do an activity that would involve completing a badge. During cookie season, they would try to sell cookies. Because she was a princess, Ellaree also traveled to parades on the Navajo Nation.

This year has been different.

Ellaree points out that Pinon has only one grocery store, two restaurants, one gas station and a health clinic resulting in a lack of infrastructure and paved roads.

“Because of COVID-19, we have lockdowns every night and every weekend,” she said. “We can’t really travel around because of the lockdowns. Going to the closet place to get food, would be Flagstaff, which is two hours away, which is a four-hour trip, which would be hard. The pandemic [has pointed out] our lack of produce and materials to help our families and our pets.”

Pamela said through camps, pen pals and other activities in the past, the Girl Scout troops have been in contact and focused on girl opportunity.

“When the pandemic hit, the Girl Scout connections that were already in place shifted really quickly to be able to be service offerings,” Pamela said.

It was also an opportunity for Hopi and Navajo Girls Scouts to help the Glendale troop’s effort.

“Instead of just being a recipient, the girls worked together and created a sisterhood, which is what they really try to emphasize in the Girls Scouts — ‘We’re in this together. We’re sisters. We will help each other,’” Pamela said.

Pamela emphasized that the development of the giving part for the troops in northern Arizona was important.

“Ellaree had to do a lot of work to get those distributions out into the community,” Pamela said. “3,300 hundred items, 2,000 pounds of dog food (and cat food), she personally hauled those dog food bags off of trucks and into our garage.”

There were three main ways the items were distributed out to the community, which was not just to Pinon, but also to Blue Gap, Hardrock and other communities.

The troop also distributed at chapter houses, which were then distributed to senior centers. They worked with Community Health Representatives to do CHR visiting health support distributing masks and gloves. And they distributed in person to a huge line of cars.

The troop also got permission to put masks and gloves in post office boxes at the post office in Pinon.

“When people went to the post office to get their mail, they would find the masks and the gloves,” Ellaree said. “It was really appreciated. All over Facebook and social media, they were saying, ‘Thank you so much. This has been really helpful because we also can’t go to the grocery store without a mask…’

The troop made approximately 1,400 mask deliveries.

Meeting in the midst of a pandemic

And they got to finally meet the Glendale troop — on Zoom, which they hadn’t done before the donations were first given.

“It was really great to talk to them directly. It was fun for the girls to get together and connect,” Pamela said. “The effort happened before the girls had even met each other. The Girl Scout sisterhood was what brought them together first. I just think that’s kind of a cool thing.”