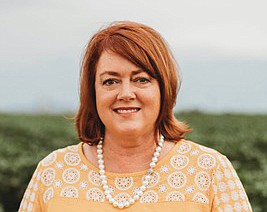 FLAGSTAFF, Ariz. — Tiffany Shedd and Nolan Reidhead will square off in the Republican primary Aug. 4 for a House seat in Congressional District One, which includes the Navajo and Hopi nations.

This is the second article in a series of the four candidates.

Incumbent Tom O’Halleran and Eva Putzova will battle it out in the Democratic primary.

As Americans, Shedd said everybody should have the ability to work hard to obtain what they want. She does not want a universal income that takes away people’s choice on how to live.

“Socialism takes away the human spirit to do better, takes away self-reliance and people should not rely on an overreaching federal government,” she said.

For example, she said, the government has too many rules regarding mining and farming. She said if a family is not in the farming business, it’s hard to start one because prices have risen significantly because of government regulations. She said a tractor that used to cost $100,000 now costs $800,000.

Another example of government overreach is federal dust regulations. She said having the same dust regulations in Arizona as in Maine and Hawaii makes no sense, these decisions should be decided by each county.

Shedd wants to see the borders protected, but wants to see legal trade continue for both sides of the border. She said her husband’s family has dual citizenship for Mexico and the U.S. She said since the mid-1990s organized crime including human and drug trafficking has been a problem.

“When we allow a porous border, it encourages ruthless people and discourages good business,” she said.

Shedd said she wants to remove government regulation that impedes people in rural Arizona. She believes federal government has a role to help people with infrastructure such as roads, utilities and broadband.

“There is so much federal land, but that land does not belong to the federal government. It belongs to the people,” she said.

Shedd said regulations set by the federal EPA have made it hard for people to build infrastructure.

“We need to get government out of the way. Government should help people succeed,” she said.

Regarding the coronavirus, Shedd said there is not just one federal solution because different states have varying spikes of the virus.

“It comes down to state’s rights,” she said. “The more local control the better with local leaders doing what they have to do.”

The Navajo Nation has been a hot spot for the virus while in other areas in the district the virus numbers have been low.

“I go back to the Constitution for the decisions I make,” she said.

Shedd said the federal government should help states when they can’t handle it on their own and should help people when financial problems arise due to the virus.

“As the numbers go down, we can relax rules. We do not want to shutdown businesses in a city that has little or no coronavirus,” she said.

But Shedd is also concerned that in areas with higher numbers health care centers could become overwhelmed.

“We have to protect the vulnerable,” she said.

Regarding the recent protests after the death of George Floyd, Shedd said she supports the First Amendment rights of peaceful protest. However, she is appalled when it turns to looting and destroying property.

“We have a lot of good police. Like every industry, there are bad apples and nobody wants bad police. We cannot defund police; we need more funding. Police have to make life and death decisions in split seconds,” she said.

Shedd is married to a Miskogee Creek man from Oklahoma and their children are Native American. Her husband’s tribe did not have tribal sovereignty until the 1970s.

“Our children have to know and be proud of their heritage,” she said.

Shedd said children on reservations have less off a chance of being successful. She said Congress needs to work with tribal leaders to change this by empowering tribes.

“We need to work with all tribes by listening and partnering--not a patchwork of throwing some money at something,” she said.

Shedd said Congress needs to work with the tribe on the water issues.

“If this was a third world country it would be addressed, but we need to make sure that it’s something they want,” she said. “If we lose water for two days it’s like the end of the world; imagine living like that.”

Two other issues Shedd wants to address include a disproportionate number of missing Native American women and life expectancy rates for Native women.

Shedd said there is a great disparity of care within the IHS system and health care for Native Americans is not charity but a responsibility because of treaty obligations.

Shedd said there are about 500 mines on the Navajo Nation that need to be cleaned up and any future uranium mining should be decided by the Navajo Nation. She said on federal lands, the proposals to mine uranium should be decided by the science and if it can be done in a way that everyone would feel comfortable than it could move forward. She believes the Colorado River should be protected from contamination.

“We are going to transition to learning online when needed,” she said. “This is not going away for a while.”

Shedd, who has lived in Arizona since she was seven years old, said she faces the same problems of most living in rural Arizona. Working as a teacher in rural Arizona has shown her the need for educational opportunities and earning a law degree taught her how to deal with government issues.

“We need to come in with a surgical knife when dealing with natural resources because they connect with each other,” she said.

Her political role model is former U.S. Sen. Jon Kyl, who is from Arizona and was known as an expert on water issues.

Shedd and Kyl both went to University of Arizona Law School. Shedd also admires George Washington because he stepped down from power when he could have become king.

Shedd said Americans are going through tough times, but have done that before and have overcome.

“As long as we remember that we are all Americans. We need to talk and work it out. Our hope is in each other and we will overcome,” she said.

This is part two in a four part series that will feature interviews with congressional candidates running for District 1. District 1 encompasses the Navajo and Hopi reservations. The Observer will feature one candidate each week and will alternate between parties. See next week’s edition for Democratic candidate Tom O’Halleran.