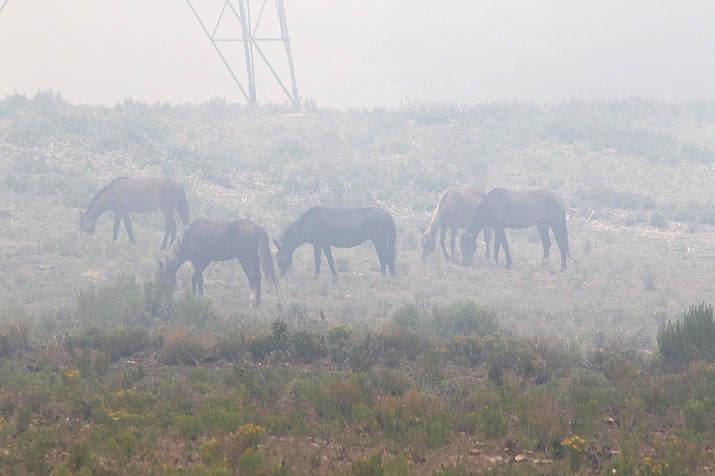 Crews on all sides of the fire have worked to restore disturbed areas caused by suppression efforts and get approval from local officials that these areas have sufficiently been restored to a more natural state. (Navajo Region Fire and Aviation Management - BIA)

The fire is located five miles west of Sawmill, Arizona and is 96 percent contained. It is 12,861 acres with 309 personnel working the fire. The blaze was started by lightning.

Over the last few days, firefighters have worked to restore disturbed areas caused by suppression efforts as well as get approval from local officials to ensure these areas have sufficiently been restored to a more natural state.

As the fire is now contained, Southwest Area Incident Management Team 5 would like to thank the Navajo Nation for welcoming them into the impacted communities and for their partnership and support as they worked to protect Navajo lands.

At 6 a.m. July 10, the BIA Wildland Fire and Aviation Management - Navajo Region, will take over fire suppression duties on the Wood Springs 2 Fire.

The fire occurred in the Nazlini and Kinlichee Chapters of the Navajo Nation. Portions of both chapters in the Fluted Rock area remain on high alert for evacuation due to the fire.

The following roads remain closed. Navajo Route 7 is closed from Sawmill to Three Turkey Ruin Junction and N26 is closed from where it intersects N27 out to Route 7. N27 and N201 remain open for general public travel.

High pressure begins to build back over the area which could lead to increased smoke from fire activity in un-burned pockets. Smoke is likely to linger in low lying areas during the overnight and early morning hours.

Higher temperatures and lower humidity levels could allow fire activity increase and areas well inside the fire line may burn and put up smoke.

Firefighter and public safety are the highest priorities. The fire area includes multiple communities, power lines, sheep and horse camps, and cultural and historical sites, which firefighters have worked hard to protect.

An executive closure order for the fire area remains in place, so the general public should continue to avoid the wildfire area.