Ducey orders cap on number of diners in restaurants 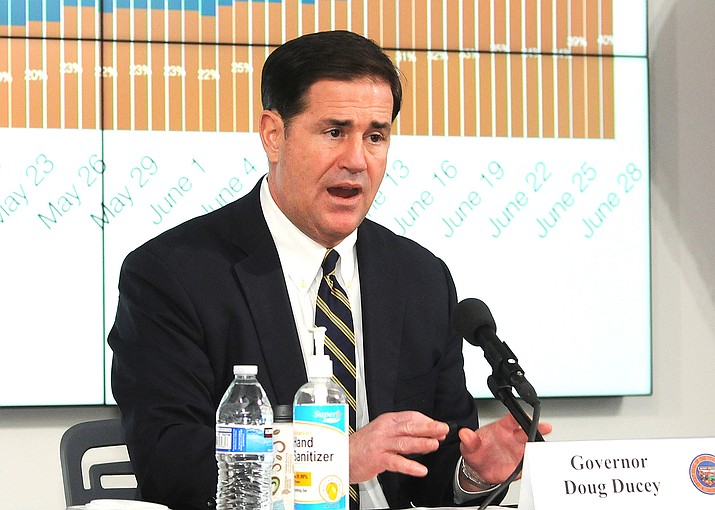 PHOENIX -- With COVID-19 cases rising, Gov. Doug Ducey is ordering a hard cap on the number of diners in any restaurant.

And diners will need to be masked any time they're not at their table.

In a new directive July 9, the governor said that dine-in facilities are limited to half the number of people that fire inspectors have listed as capacity – if the sign on the wall says that occupancy is limited to 80, that means no more than 40 diners.

The order does exempt the number of staffers present from the cap.

The action is designed to tighten up on orders Ducey made when he allowed restaurants to reopen May 11.

That included requirements to reduce the number of tables and have at least six feet between tables unless there is a plexiglas divider. Aides to the governor said that has become difficult to police.

By contrast, both building officials and law enforcement can enforce a hard and fast number based on maximum occupancy as determined by the fire department.

That limit does not affect outdoor dining where the risk of spreading the virus is less. But the rules do remain in place for six-foot distancing between tables. Any area beneath a roof counts as indoor dining, even if the entire side of the restaurant is open to the outdoors.

The order also has a specific requirement on patrons, requiring them to wear a mask any time they are not seated at their table. It also prohibits people from standing in groups, whether to wait for a table or go to the bathroom. The order encourages the use of reservations.

Ducey's move comes as the state added 75 new deaths July 9 because of the virus, bringing the total to 2,038. There were also 4,057 new cases of COVID-19; the statewide tally since the outbreak of those affected is now 112,671.

Hospitalizations of those with positive or suspected cases also continues to set records, with the figure at 3,471 on July 9. ICU bed usage was at 861, 10 off the record set a day earlier.

The Department of Health Services reported 89 percent of ICU beds in use by patients of all types with 87 percent of in-patient beds in use.

More than 28 percent of the tests for the virus reported July 9 came back positive.