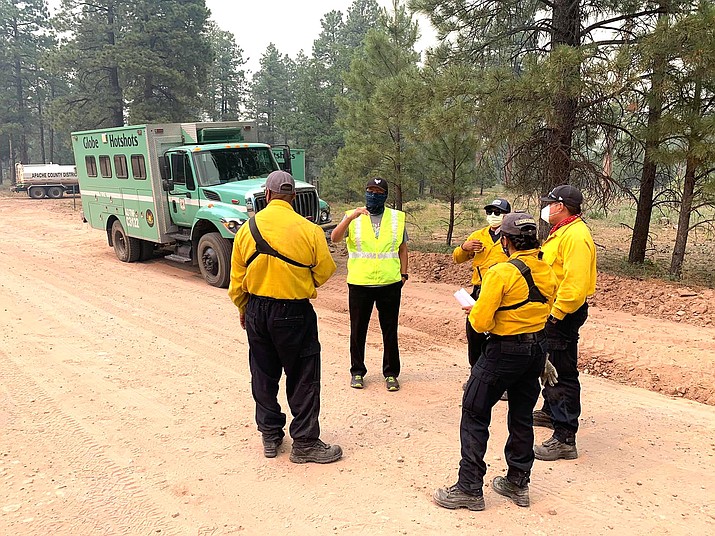 The fire was caused by lightning and is located five miles west of Sawmill, Arizona.

As of July 5, firefighters continue to hold the fire west of Route 7 and north of the powerlines, and were able to make significant progress July 4, according to the at BIA Wildland Fire Management – Navajo Region.

Crews still have plenty of work ahead of them, as the northwest portion of the fire remains active and other areas need to be patrolled and fire line secured. Fire behavior analysts expect the potential for continued fire activity to increase as dryer air and higher temperatures impact the fire today.

On the west portion of the fire south of N-26, crews strengthened and secured containment lines. With the area mostly secure, personnel from that flank prepared to engage work and supplement crews elsewhere on the fire.

North of N-26 on the western side of the fire, crews continued to secure lines cut by hand and lines created by bulldozers, as an unmanned aerial surveillance (UAS) aircraft (drones) fired ping-pong-ball-like spheres that ignite when they hit the ground in an attempt to burn out a peninsula of unburned fuel in the fire interior. This will help secure fire lines on the northwest corner of the fire.

A hotshot crew from Globe, Arizona help with fire supression efforts on the Wood Springs 2 Fire on the Navajo Nation last week. (Photo/Office of the President and Vice President)

Along Route 7 north of Oak Creek Mountain, crews continued to maintain and secure fire containment lines. South of that, crews on the southeast side of the fire continued to clean up hot spots and push the fire into the interior.

Crews reported no additional structures damaged yesterday. In total, four corrals, an outbuilding (a shed, barn, or outhouse) were destroyed, and a hogan had minor fire damage. Structure assessment will continue to occur when it is safe for firefighters to enter.

Cooperation on fire containment and related operations continues between fire personnel and local, tribal, and federal agencies. Navajo Nation President Jonathan Nez closed the fire area to the public, to assist fire personnel. While smoke may be less visible there is still flames and the potential for the fire to cross containment lines.

The communities of Sawmill and Fluted Rock remain on high alert and are asked to continue to be ready. If asked to evacuate, please contact the local chapter house for information on evacuation shelters.

There should be less smoke produced today. Some remaining fuels will continue to produce smoke, particularly near the northern edge of the fire. With light winds, the smoke is likely to linger in low lying areas and places closest to the fire. Smoke could be dense overnight and in the early morning hours. Unhealthy air quality levels are expected near Sawmill. People within sensitive groups should reduce prolonged or heavy outdoor exertion.

An executive closure order for the fire area is in place. The general public should avoid the wildfire area so as not to interfere with firefighting efforts. Navajo Route 7 is closed from Sawmill to Three Turkey Ruin Junction and N26 is closed from where it intersects N27 out to Route 7. Roads that remain open are N27 and N201.