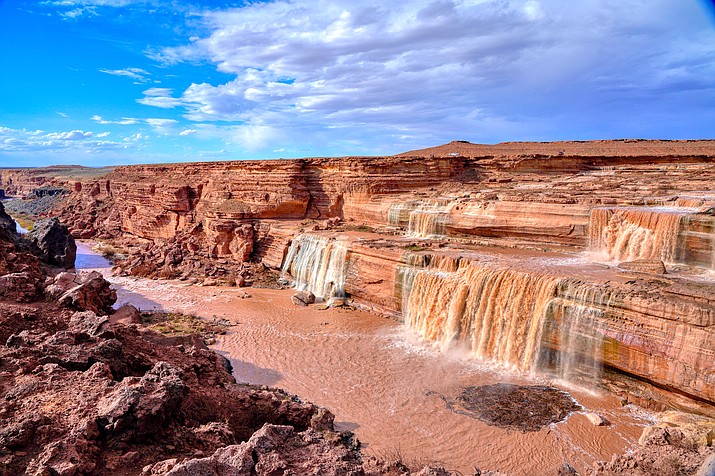 Grand Falls is located on the Navajo Nation and is part of the Little Colorado River. (Adobe Photo)

ALBUQUERQUE, N.M. (AP) — The nation’s largest Native American tribe and several environmental groups are waging a legal challenge to a revised federal rule that lifts protections for many streams, creeks and wetlands across the U.S.

The rule, which took effect June 22, narrows the types of waterways that qualify for federal protection under the half-century-old Clean Water Act. As a result, critics say the number of waterways across the Navajo Nation and other arid states in the West that were previously protected under the act have been drastically reduced.

Public health advocates, environmentalists and some Western states, among other opponents, had promised court fights once the rule was imposed, saying the rollback will leave many of the nation’s millions of miles of waterways more vulnerable to pollution.

“At this point in time, with climate change occurring around the world, it’s more prudent than ever to protect our land, water and air,” said Navajo President Jonathan Nez. “We, as Diné People, have a duty to preserve and conserve our natural resources to ensure that our future generations have access to clean water, air and land.”

The tribe filed its claim June 22 in U.S. District Court in New Mexico.

Amigos Bravos, the New Mexico Acequia Association and the Gila Resources Information Project followed with their own appeal June 23 and the Environmental Integrity Project filed a separate claim in Washington, D.C. on behalf of four other environmental groups. The cases name the U.S. Environmental Protection Agency and the Army Corps of Engineers, the federal agencies in charge of administering aspects of the rule.

In adopting the change, federal officials have argued that the previous Obama-era rule imposed unnecessary burdens on property owners and businesses and that the change will bring regulatory certainty for farmers, homebuilders and landowners.

Some of the groups contend New Mexico is disproportionately affected because so many of its small streams flow only during wet times of the year.

Paula Garcia, the executive director of the New Mexico Acequia Association, said communities around the state rely on traditional irrigation systems that are fed by snow, rain and runoff for crops and livestock. With protections removed for the seasonal waterways that feed the acequia systems, she said agricultural livelihoods will be put at risk.

Rachel Conn with Amigos Bravos said the rule protects the interests of polluters.

“The Trump administration has opened the pollution floodgates,” she said.

Under the new regulation, permits are no longer necessary for discharging pollution into many rivers, lakes and streams. Charles de Saillan, an attorney at the New Mexico Environmental Law Center, said the effects could be felt by a number of businesses, from rafting companies to community farmers.

On the Navajo reservation, which spans parts of New Mexico, Arizona and Utah, officials say there already are businesses not complying with tribal and federal environmental laws and the revised rule won’t help bring them into compliance.

“Since the inception of the Navajo Nation Environmental Protection Agency’s water programs, our main purpose and goal has always been to protect our nation’s water sources. However, our job becomes difficult when the federal government rolls back environmental regulations in favor of polluters,” said Ronnie Ben, who oversees the tribal agency’s water programs.

New Mexico was among the states that went to court in May seeking to keep the rule from taking effect.

At the time, New Mexico Environment Secretary James Kenney warned that the rule would leave nearly 90 percent of the state’s rivers and streams and about 40 percent of its wetlands without federal protection. He predicted that would “devastate New Mexico’s scarce and limited water resources.”

The state had pointed out in comments previously submitted to the federal government that New Mexico has no state protections to fall back on. New Mexico is one of three states that don’t have delegated authority from the EPA to regulate discharges of pollution into rivers, streams, and lakes.