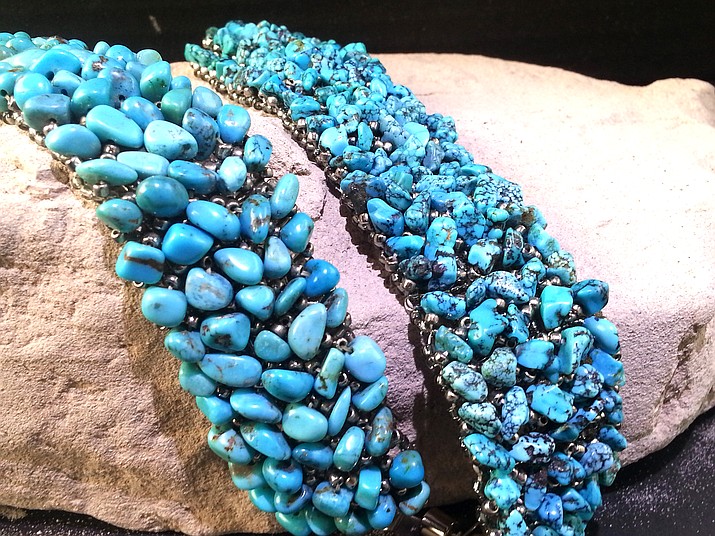 Alphonso John of JJJ's Beaded Jewelry is one of the recipients of the Kinship Lending program through Change Labs. (Photo courtesy of Alphonso John)

TUBA CITY, Ariz. — Native business hub, Change Labs, is offering zero-interest loans of up to $5,000 with no credit check to Native entrepreneurs and small business owners, which includes artists, facing challenges because of the coronavirus pandemic.

Heather Fleming, executive director, emphasizes that these loans, part of a Kinship Lending program, are open to any recognized business owner, artist or vendors who sells on side of the road or at the flea market.

“Regardless of your official status as a registered business owner either with the Navajo Nation or with the state of Arizona, we don’t really care about that,” Fleming said. “As long as you are someone who’s making transactions, then you qualify for this loan.”

Fleming said that is a deviation from traditional and federal loan programs and one designed specifically for the population Change Labs is trying to help — Native owned businesses and entrepreneurs. There is no cost to apply.

“That was part of our strategy to make sure that anybody who was running a ‘business’ could access the funds they needed to help sustain their operation,” Fleming said. 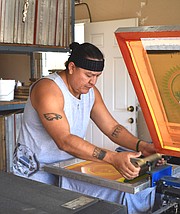 There is also another differentiating factor — these are character-based or relationship-based loans.

“All that means is we’re not looking at someone’s credit history or their credit score in order to determine whether they’re a good applicant for a loan,” Fleming said. “We’re not asking them for collateral (the loans are 100 percent collateralized by philanthropy). All we want to know is do you have two or three friends who can give you a glowing review and tell us you’re a reliable, trustworthy person. Is there someone in the community who can vouch for you and your business?”

Fleming said Change Labs knows that some of the people who need loans right now may not have a credit history or may have a poor credit rating and that collateral to guarantee a loan is difficult for many of the small business on the Nation, particularly in tribal communities where people don’t own their own land.

“We wanted to make a process that relied on community and clan and someone’s character, more than it did on the data that defines them as an individual of the United States,” Fleming said.

The current program has been in place since the first week of April. It has 30 plus approved applicants, 19 borrowers who have received money and has lent almost $100,000. The program has $196,000 still to lend.

Artists are one group that Fleming is trying to reach out to, saying that of the people who come into Change Labs, artists are the ones who are reluctant to call themselves business owners or an entrepreneur.

“They identify as an artist,” Fleming said. “For that reason, it was really important to us that this loan wasn’t limited to people who say, ‘I’m running a business or I’m an entrepreneur or I have a registered business in the state of Arizona.’ We would basically block out so many people who need the money, who are running business, but maybe just don’t always recognize that.”

How and what the money is used for by small businesses

Right off the bat, Fleming said, people needed the money for personal uses, which the loan allows.

“It’s technically a loan for their business but there is no limitation on what they can use the money for other than they can’t use [the money] to pay off an existing loan,” she said.

But the money can go for supplies, equipment, food on the table.

“I don’t want to say they used all of it for that,” Fleming said. “But I know for a fact that that was an immediate thing that a lot of people needed to solve, to just take care of some immediate expenses. A lot of our borrowers tell us that the money is providing them room for them to breathe and think about the future.”

Some borrowers are using the money to transition online, like Alphonso John, the owner of JJJ’s Beaded Jewelry, who is based in Gallup, New Mexico.

Normally, during the summer, John would be traveling around throughout the country to festivals and art markets, like the Santa Fe Indian Market.

“I want to say over 90 percent of my business is coming from new business and from traveling to new places,” John said. “The pandemic hit and I can’t really travel. I can’t really talk to people in person rather than on the phone or by typing on email.”

John said he has used the loan, which he received in mid-April, for various things: immediately those were food, rent and bills.

“Once those were taken care of, I did have some relief for those couple of weeks there and then I wanted to get back into the business,” John said.

He found himself with time to take care of some things he had really wanted to do but never had time for before like marketing, creating a website, creating a LLC.

“I learned about different aspects of business and went to school for business finance,” John said. “A lot of downtime made it so I could sit down and learn what I needed to learn. I skipped over a lot of chapters by learning from mentors.”

Where does the money come from?

About $90,000 of the money is coming from the Kellogg Foundation through a Program Related Investment. Another almost $90,000 is coming from Change Labs donors and grants. The remaining portion comes from Nusenda Federal Credit Union Co-Op Capital program, which lends to Native American entrepreneurs and change makers across the Colorado Plateau.

Applications will be reviewed and loans awarded on a first come, first served basis. More information and how to apply is available by visiting https://nativestartup.org/kinshiplending.