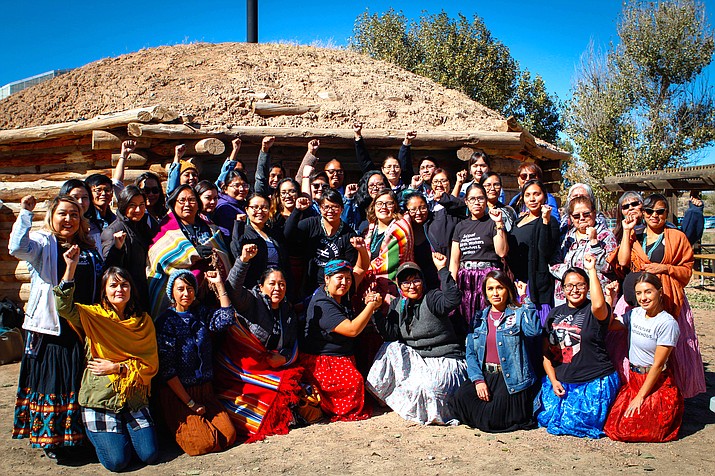 Participants in an indigenous doula training, coordinated by Changing Woman Initiative, pose for a photo outside a hogan in Window Rock on Thursday, Oct. 24, 2019. Such training used to draw a dozen women – this one drew 40. “The demand just kind of exploded,” midwife and facilitator Melissa Brown said. More than 100 people applied for the workshop. (Photo by Delia Johnson/Cronkite News)

WINDOW ROCK, Ariz. — Some Native women have come to the Navajo reservation to be trained as doulas- aides who have no formal medical background but provide guidance for pregnant women up to and through labor, and sometimes beyond.

They’re in Window Rock, capital of the Navajo Nation, to learn how to help their own, but also to help confront a tragedy plaguing women in Indian Country and across the United States.

Too many women are dying due to complications from pregnancy and childbirth — deaths that should be preventable with the right intervention and care.

About 40 women, most draped in traditional dress, stand in a circle as Melissa Brown, an indigenous midwife, asks the group to reflect on the day just ending — and the mission still ahead.

“We have talked about being safe here. That is our goal,” she tells them. “We’re going to cry, and we’re going to laugh. And that’s OK.”

One by one, the women share a word that best captures how they feel: Happy. Safe. Joyful. Supported. Sovereign. Brave. Then one sings a hymn in her native tongue.

Brown’s own experience with labor inspired much of her work as a midwife.

Pregnant as a teen with her first daughter, Brown was induced for two days with medication to strengthen her contractions. She remembers the doctor at one point telling her she had 20 minutes to get the baby out or would otherwise have a cesarean section.

After her daughter finally was born, Brown suffered a hemorrhage and later battled postpartum depression.

“There’s definitely places for (Western medical) interventions,” she said, “but we need to be able to explain to people what’s happening in their bodies … and what those risks and benefits are and what some alternatives are.”

For her second pregnancy, Brown relied on an indigenous midwife. Brown soon began helping other pregnant women, then trained as a doula and eventually became a midwife. Part Navajo and Anishinaabe, Brown now runs Zaagi’idiwin, a doula training and maternal health organization based in Winnipeg, Canada.

Although some of the women gathered in Window Rock had left the reservation long ago, all shared at least one thing: Navajo roots.

“It’s really kind of reconnecting and revitalizing the knowledge that’s already here. We’re not teaching anybody anything new – we’re just reconnecting them with things that are in their community.”

Pam Malone was there to learn how to be an emotional support aide for women throughout their pregnancies. She was inspired after helping her sister during labor – a duty she took on after her mother died.

“That kind of put me in this place of wanting to give back,” said Malone, a program manager at Northern Arizona University in Flagstaff who has no medical training.

Another trainee, LaKota Scott, is in her fourth year at National University of Natural Medicine in Portland, Oregon, and plans to work in women’s health. Her goal was to learn how to incorporate traditional practices into her training.

“There’s a lot of Native people that live in Portland, but the care you actually get as a Native person is very poor usually, especially in urban areas,” she said. “By having somebody there to educate you and support you through that, you can reduce a lot of that fear and educate them more about their bodies.

“And that’s really important for Native women, or just women in general.”

Becki Jones, a program manager at Planned Parenthood in Albuquerque, wanted to become more knowledgeable about reproductive health through a “traditional lens” and pass that on to colleagues back home.

“It’s just nice sharing this space where it actually feels safe, where I can ask any question,” Jones said. “I’m getting this knowledge, and it’s sacred knowledge and it’s so beautiful. It’s building a revolution for us. We’re taking back and reclaiming our knowledge and our sovereignty and our autonomy.”

Throughout the four-day training, the women learned some of the basics of doula work, such as understanding the stages of pregnancy and creating care plans. They also discussed using cultural meditations to help with contractions and such traditional practices as placenta and umbilical cord burials – meant to symbolize a child’s connection to Mother Earth.

But the workshop went far beyond all that.

They shared personal stories of grief and loss. They found connection through motherhood, and how the effects of colonization have complicated their ability to effectively address women’s health struggles.

They bonded over the importance of simply having such discussions – often considered taboo in the culture.

“We might hear from our elders that we’re not supposed to talk about death,” Gonzales said. “And so to have a really frank conversation about death and miscarriage and abortion and pregnancy was really the heart of the issue.”

Most importantly, she said, the women felt “held and heard” by one another.

“A lot of the conversations I have with women … issues come up around not having support and feeling like they’re invisible or they’re alone,” Gonzales said. “Being in a space like this really reinforces that we are beautiful, spiritual beings.