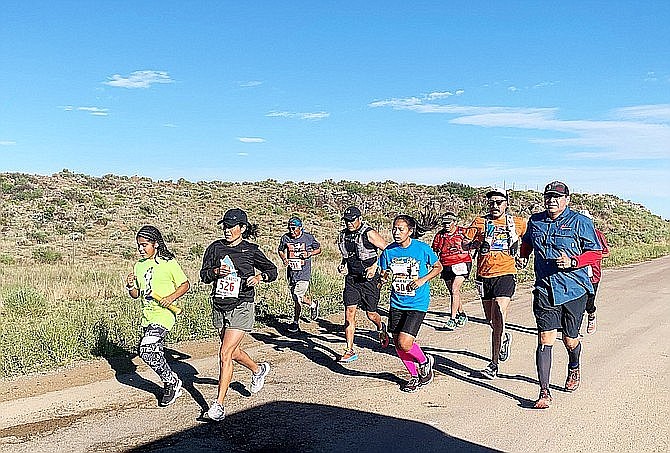 The Navajo Nation Special Diabetes Program kicked off its annual Running for a Stronger and Healthier Navajo Nation July 8, 2019, in Ramah, New Mexico. The program hosts runs across the Navajo Nation to help promote healthy lifestyles, prevent diabetes and bring awareness to obesity, cancer and chronic diseases. (Photo/Office of the Navajo Nation President and Vice President)

They want to set a good example for their 17-year-old son, Nathan, and take a personal stand against obesity, which can lead to diabetes and other serious health problems, especially in Native Americans.

“The health of my child is everything to me. I want him to grow up to be healthy,” said Alex, a member of the Salt River Pima-Maricopa Indian Community.

With the help of a community program, his family is getting healthy.

Diabetes and obesity are linked; more than 90 percent of people with Type 2 diabetes are affected by some degree of obesity, according to the Obesity Action Coalition. Excess weight can make the cells of muscle and other tissue more resistant to self-produced insulin.

Historical discrimination and modern disparities have left Native Americans with less access to good farmland and grocery stores. But several communities, from the Navajo Nation to the Pima-Maricopa tribe, are instituting programs to educate and help members battle for better health.

Federal officials and tribal leaders are implementing programs and services to fight the toll of obesity and diabetes.

The Indian Health Service has a special diabetes program for Indians, which focuses on prevention and treatment. Aazami said the program has reduced end-stage kidney failure by 54 percent and diabetic eye disease by 50 percent in the Native population.

The CDC has funded the Good Health and Wellness in Indian Country program to revitalize Native foods, improve reconnections to culture and inform communities about traditional tools and ways for staying healthy.

In 2014, the Navajo Nation Council approved a 2 percent junk food tax on sweetened beverages and foods high in fat, salt and sugar, including candy, chips, pastries and fried foods bought on the reservation.

Research into the effectiveness of the law, conducted by Navajo officials in collaboration with Northern Arizona University’s department of health services, said obesity, diabetes and related diseases are multifaceted health problems that can’t be curbed based solely on diet, but that the junk food tax “may ultimately address the critical public health concern by promoting communities to improve their health through physical activity, health education, and traditional knowledge, as well as improving access to these healthy resources.”

Charleston said education is a key part of the Navajo diabetes program.

“Our primary focus is implementing three areas for diabetes prevention: increasing diabetes education, increasing nutrition education and increasing more physical activity events across the Navajo Nation,” she said. “We have put all the numbers aside and our goal to educate our Navajos about what prediabetes and obesity looks like, because we know that prediabetes and the early stages of weight gain are reversible.”

The program also has implemented wellness activities and wellness centers where school-aged children can be more physically active.

The Alejandre family credits the center and its programs with guiding their journey to good health.

Mary has a private session with a personal trainer every week at the facility, which offers a large workout area with weights, cardio equipment and a pool and slide.

The Alejandres, who also run marathons and 5Ks, attribute much of their weight loss to Brazilian jiu-jitsu, which they say makes working out fun.

“There’s something about someone beating you up,” Mary said.

She, her husband and their teenage son are members of Kiko France Brazilian Jiu-Jitsu, where they train multiple times a week.

After two years of training, Alex has earned a blue belt. Nathan and Mary are close to achieving their blue belts.

Besides working on their physical fitness, they watch their diet. Mary avoids junk food, feeding her family traditional foods instead.

“Our Pima tribe is very fortunate to have an agricultural and environmental awareness department where they cultivate traditional foods and they grow it,” she said. “They have a garden on the Salt River where you can plant these foods and you can harvest it when available.”

Alex said he ate the wrong foods when he was growing up.

“As a kid, I would indulge in unhealthy junk food,” he said. “Nowadays, I avoid that. I make sure no soda, and the staple of my diet is rice and chicken.”

And Alex and Mary Alejandre have achieved one more goal. Their son believes his parents are a good example.

“I keep on the right path, to stay healthy both mentally and physically,” Nathan said.