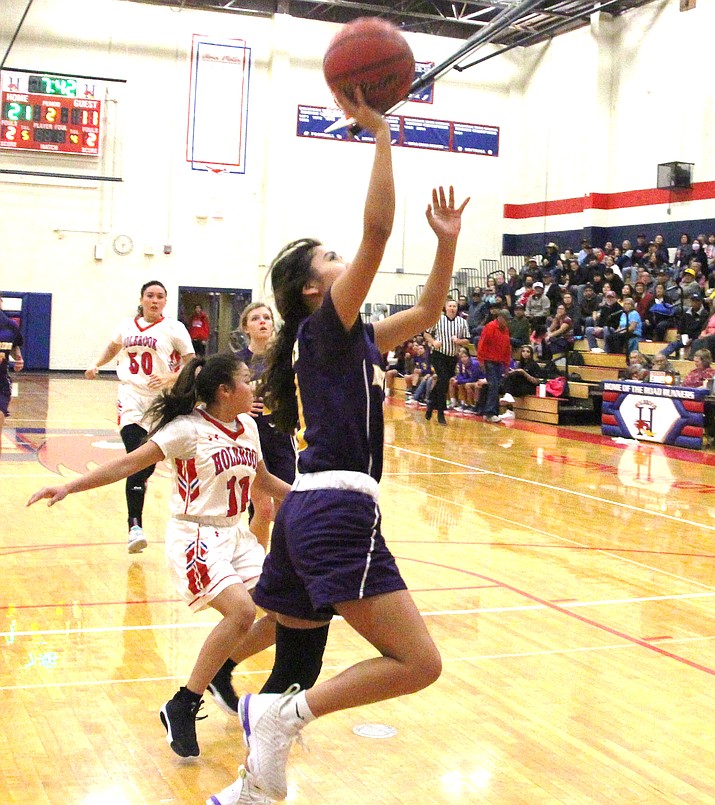 The Lady Roadrunners (12-5, 1-0) defended their home court, with a double digit win over the Lady Yellow Jackets of Blue Ridge, 67-31.

“We have been playing pretty well” said Holbrook Roadrunners Coach Delmar Johnson. “Overall, we are looking at how well we are going to play tonight.”

“The key is Brotherhood – work and play like true brothers,” commented Scott Catt, head coach for the Blue Ridge Yellow Jackets. “We are playing a great team, they have a great offense and defense (and) a well coached team.”

Holbrook opened the game with Zeke Begaii, taking the tip and racing down the court, scoring with a lay in. The Roadrunners were off to the races, midway thru the first period with a 13-2 run lead.

Another mini run, 11- 4 scoring strike by the host led to a 22-4 advantage, before the Yellow Jackets mounted a run of their own, a 10- 4 scoring that ended the first quarter, with the Roadrunners, leading 26- 14.

The one-two punch of the Roadrunners (Eric Baldonado, Kobi Koerperich) continued to pace the host, with a 19- 7 second quarter scoring. At intermission, Holbrook led 45-21.

With the outcome of the game well in hand, both teams substituted nonstarters, getting them ready for the regional play and the rest of the season. The Roadrunners led by a score of 62-39, as the third period ended.

Playing the reserves off the bench allowed them to show cased their talent for those who remained for the conclusion of the game. The Roadrunners claimed the regional win, 74-51.

“We played well, we had a comfortable lead but let them (Blue Ridge) back into the game,” Johnson said. “We made some adjustments – we are happy with the win.”

“We started well, making shots, we were able to build a big lead. We rebounded well too. It allowed us to make second change baskets,” he said.

Eric Baldonado contributed 21 for the Roadrunners, followed by Damien Clark with nine points.

“I like the way the Roadrunners respond to their coach, it says a lot about the character of the team, we are working on getting to that point also,” said Blue Ridge Coach Catt, during a post-game conference.

Holbrook jump out of the gate, with a quick 21 to 11 scoring first quarter, a lead they kept and increased throughout the game.

“We played well in the Holiday Tournaments, we want to keep that momentum,” said Holbrook Lady Roadrunners Coach Greg Perkins. “Blue Ridge is a good and quick team, they have good shooters. We have to focus on game.”

The Lady Roadrunners continued their pursuit for a victory with Matehya Aberle remaining unstoppable in the paint, she scored eight straight points with post up baskets.

Holbrook took an 18 point lead, 39-21 at the intermission break.

The Lady Roadrunners coasted to the third quarter led, with scoring by Aberle and senior standout Madison Chappell and Shandii Ben, pushing the lead by a point, to 56-27.

The Holbrook reserves closed out the final quarter with a 11-4 point effort and final score 64-31 in the Roadrunners’ favor.

“We fought till the end.” Perkins said. “We have a tough teams in the region, tonight we played one of them – we just can’t let up.”

Aberle scored a game high of 18 points and Chappell added 10 points to win for the Lady Roadrunners.

“Tonight we were out of rhythm, we are going to work hard and get back into it,” Butler said.

The Yellow Jacket were led by Raine Tate with 7 points.