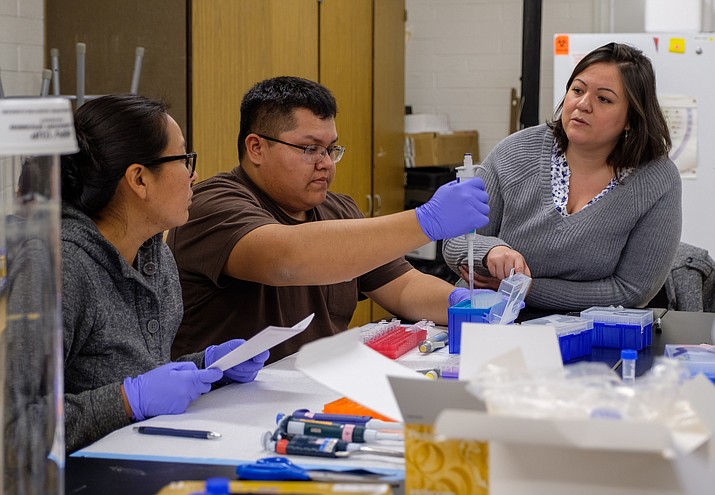 The focus of the project is to create a pipeline of scholars to go from Diné College to neuroscience programs at top-tier research universities around the U.S. The grant’s aim is to engage selected Diné College scholars and increase the number of Native Americans in graduate schools and research careers. The Maryland-based National Institutes of Health (NIH) is the source of the grant.

“It’s been very productive,” Soto said. “The students are attentive and learning new things. Part of this is teaching the basics about how to do science projects.”

Angelene Yazzie, a biology and pre-pharmacy major from White Cone, Ariz., said she and fellow Diné College students Allyssa Joe, from Lukachukai, Ariz., and Wyatt Tohee, from Rampasture, Ariz., participated in the classroom exercises. Yazzie called the sessions “hands-on,” saying everything played into what she plans to do after graduation. She said becoming a pharmacist is her long-term plan right now.

“I like what I’m doing,” Yazzie said in the midst of pipette exercises. A pipette is a laboratory tool commonly used in chemistry, biology and medicine to transport a measured volume of liquid often as a media dispenser. “I think we’ve each learned a lot the entire week,” Yazzie said.

The three students travel to the University of Arizona in Tucson in May to continue the program. That part of the program is a 10-week session which includes a stipend.

Native Americans are among the most underrepresented groups in the biomedical sciences, accounting for just 0.5 percent of the total workforce, lower than any other racial or ethnic group, according to the NIH.

Kathleen Rodgers, Ph.D., associate director of translational neuroscience at the University of Arizona Health Sciences Center for Innovation in Brain Science (CIBS) and Roberta Diaz Brinton, Ph.D., director of the CIBS, and Fred Boyd, Ph.D., a science professor at Diné College, were awarded the NIH grant to develop the cooperative training program.