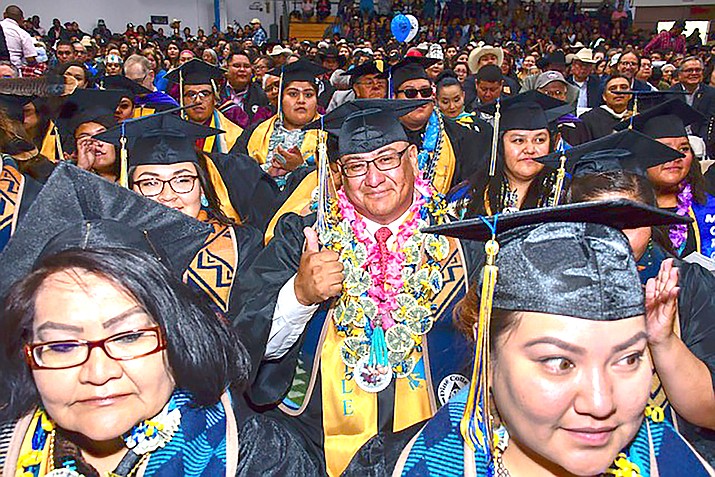 Diné College was ranked No. 5 nationally for offering the largest number of associate degrees to Native Americans. (Submitted photo)

Diné College graduates include a large number of students with associate degrees, according to a survey done by the U.S. Department of Education’s National Center for Education Statistics and published in the Dec. 12, 2019, edition of Diverse: Issues in Higher Education, a national magazine.

“We are proud of the ranking, it reaffirms that our faculty care about student success and with a low teacher-to-student ratio, extra time can be focused on students to ensure they are successful,” said. Diné College President Monty Roessel.

According to the magazine, the number of associate degrees awarded around the U.S. in the academic year 2017-18 was just more than 1 million. Of the degrees awarded, 44 percent were conferred to minorities.

“Because the institution is culturally-based and relevant for students. Students incorporate both the Navajo and Western perspectives in their education and are able to achieve their goals toward life-learning,” she said.

The survey breaks down the Top 100 institutions that awarded associate’s degrees to Native Americans, African Americans, Asian Americans and Hispanics.

“I will always value the Navajo teachings that were part of the business program and how Diné College puts that influence into college concepts,” Ryan Lee said.

Lee graduated from Diné College with associate (2017) and bachelor (2019) degrees in business and pans to attend the University of Oklahoma to pursue a master’s degree in business administration. He currently works as a student recruiter for the college.

“This is a very important part of why people choose the business program at the college,” Lee said.

Diné College was founded in 1968 as the first tribally-controlled institution of higher learning and solidified its four-year status in April 2019. The college operates campuses in Arizona and New Mexico and is planning to establish a law school.

Launched in 1984, Diverse: Issues in Higher Education covers news, information and commentary on subjects concerning diversity in American higher education. It is the second largest higher education trade publication in the U.S. and delivers the largest audience of educators of color from more than 4,800 U.S. colleges and universities.