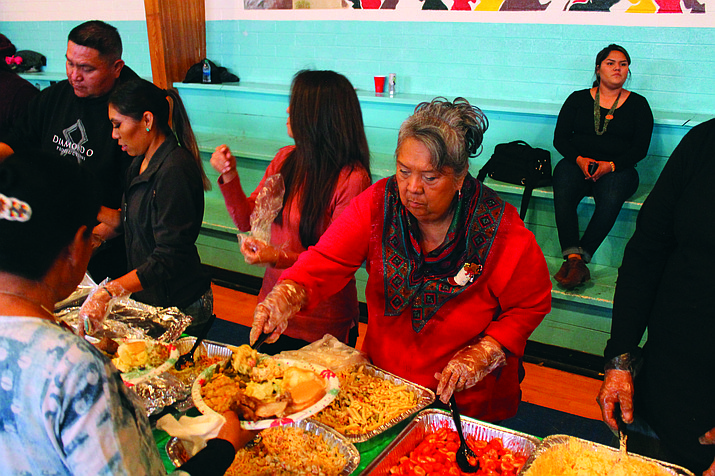 TUBA CITY, Ariz. — It was a page out of a Christmas storybook as children were filled with anticipation and excitement, parents and elders smiled and socialized, and volunteers cheerfully passing out hot drinks and serving hot meals while spreading goodwill to others Dec. 25 at the Community Christmas Dinner in Tuba City.

It was certainly the perfect atmosphere to bask in as more than 400 people attended the annual event hosted by the family of Roberta Begay and the late-Edward Begay of Coalmine Canyon.

Christmas carolers sang quietly in the background as attendees received turkey with all its trimmings and children received gifts donated by various organizations and families. The highlight was Santa Clause’s timely arrival to distribute toys with the help of one of his many elves.

Terry Secody, 35, was the lead organizer of the event and is one of many grandchildren of Roberta and Edward Begay. He said the event was open to any families and individuals in need of a hot meal and some extra support during Christmas, regardless of their circumstances.

The event was a success and Secody is thankful St. Jude’s Catholic Church opened their doors to provide the venue. He explained before using the church facility, the event was held outdoors in a rented tent at the homestead of the Begay family in south Tuba City on Navajo Boulevard. At that time, they had to raise a lot of funds just to pay for the rental of tents, tables, chairs and buy firewood for cooking and warmth.

“That takes off a large load for us,” he said about the use of the church facility. “Other than that, everything else just comes together. Everybody already knows what to do, they start asking three months prior to December when it’s going to happen.”

Secody explained his motivation to help organize the event comes from his grandparents and the legacy of generosity they are known for. He grew up seeing his family and the community hosting the event each year.

“My grandparents helped anybody… my grandma is always generous. If she sees somebody cold outside or freezing, she would give them a blanket,” he said. “We would drive around Flagstaff and she would make sandwiches and give it to anybody that she saw that needed food.”

He described his grandmother Roberta as the philanthropist because she always has empathy for people experiencing hardship. She enjoyed cooking for people who did not have any money for food and did not have the means to provide their family with a Christmas dinner.

The annual event began in 1980 and it has grown to what it is now and many community members volunteer their time to help cook food and staff the event.

There was a 10-year gap when they did not have the event because of the grandmother’s deteriorating health. She was the lead organizer of the event. Secody said it was his grandfather Edward who urged them as the younger generation to restart the event.

“He wanted us as the younger generation to learn and run with it,” he said. “We want to carry on their legacy. They did it for 24 years and we’re now on our sixth year now. It gets easier as the years come.”

“We got more people this year than previous years,” said Secody about the turnout.

Secody’s mother, Judy Begay, was pleased with the overall turnout. She explained her father Edward told them that he wanted this event to continue on for years and years, and he wanted the younger generation to learn how to organize the event.

“Pass it onto your children,” said Begay about her father’s wishes. “You will be passing it onto your kids, and then your kids will turn it over to their grandkids. He wanted that to be a tradition year after year by the family. They’re already learning and doing it,” she said.

Secody said his grandmother’s health has been ailing the last few years and that is why she was not present at the event this year and because it was too cold outside.

He said the event is a lot of work and it is only made possible through donations and the volunteer work of many in the community.

“The community pulls together to make it all happen,” he said.

Planning for the 2020 event starts immediately and Secody said they want to do more next year. One thing they want to reincorporate is the old-style Navajo Késhmish bags, the small brown paper bags filled with oranges, apples, peanuts and old-fashion hard candy for its attendees.

“That was always my grandpa’s touch,” he said. “That’s expensive! We do have bigger plans but right now, we don’t get as many donations as we can, so we are trying to get the word out there.”

Hard work or not, Secody said it was all worth it to see the children smiling and jumping up and down, and to see everybody having a full tummy when they left the event.

“This is what Christmas is all about,” he said. “We help those in need and that is the way it has always been. That is the best feeling in the world. It is a lot of hard work but at the end, it’s all worth it.”

“I see this every year. You can just see their eyes and they are just so excited to see the gifts and the things that we give out to them. They can’t wait,” she said. “I always see the moms trying to tell them to wait and that they need to eat first, then they could get their gifts.”

“We were always taught to give back to our community, especially the people who are in our community,” she said. “That giving heart stems from our foundation who is our grandparents, Edward and Roberta Begay. A lot of us still do it now even though my grandpa is not here anymore, he would want us to continue on and keep doing this. The act of human kindness should be practiced yearlong and not just during the holidays.”