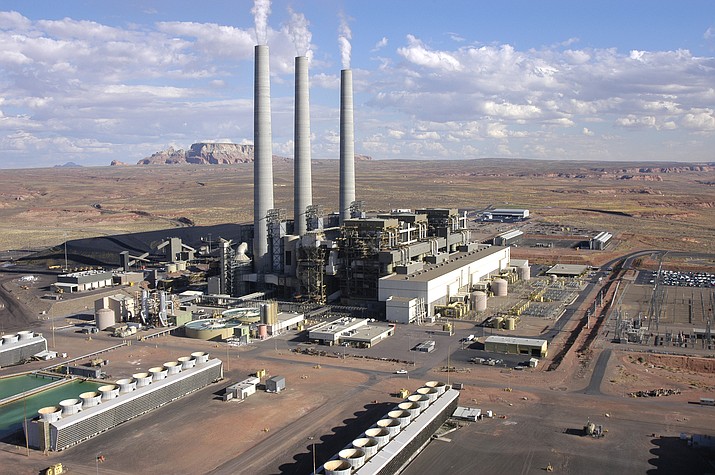 The coal-fired Navajo Generating Station near Page and the affiliated coal mine in Kayenta provided hundreds of jobs in the region for decades before closing down last month, victims of changing economics. But both facilities still face years of shutdown and cleanup operations. (Photo by Amber Brown/Courtesy SRP)

WASHINGTON — They may have turned out the lights, but the party’s not over at the Navajo Generating Station and its affiliated Kayenta coal mine.

The owners of both facilities face several years of decommissioning and cleanup as well as the possibility of decades of environmental monitoring of the sites, which closed down for good this fall after a two-year fight over their futures.

At least some of the complex will live on, through salvaged parts and relocated jobs. But the remaining work will likely employ only a fraction of the facilities’ hundreds of workers, many of whom were members of the Navajo and Hopi tribes, whose economies relied on the facilities.

Contractors for the Salt River Project, which owns the power plant, have already started a three-year process of decommissioning the 43-year-old coal-fired power plant.

The coal mine in Kayenta had one customer, the Navajo Generating Station, and when the power plant closed last year, it meant the end of the mine, too. (Photo by Brittany Nixon/Cronkite News)

National Service and Salvage Corp. of Indiana is dismantling the electrical system that powered the train that delivered coal from Kayenta to NGS, the mine’s only customer. An Ohio company, Independence Demolition, will begin this year removing hazardous materials and additional electrical equipment before demolishing the plant itself.

SRP has not announced the contractors who will do coal ash and coal pond cleanup at the site, but those processes are not expected to start until mid to late in the year. SRP says all of its main contractors have been instructed to give preference to Navajo Nation members and companies in hiring and awarding subcontracts on the project.

SRP estimates 90% of the material will be recycled, going so far as to set up a website where members of the public can purchase everything from office equipment to industrial parts salvaged from the plant.

But some parts of the complex will remain, including several outbuildings. The most prominent remnant is a transmission substation that has the capacity to deliver 500 megawatts of power to the electrical grid.

An SRP spokesman said the company will continue to pay for the operation and maintenance of the substation for the next decade.

Even though the plant is gone, the Navajo Nation will still get payments from SRP for the property. An SRP spokesman said the company was paying $600,000 a year in lease payments to the tribe, and will give a one-time payment of $110 million, which would be about $3 million a year if stretched out over the new 35-year lease.

Mine owner Peabody Energy did not lay out a specific reclamation timeline for the Kayenta Mine, except to say in an email that it is expected to take several years. That is less time than it could have taken, a Peabody spokesperson said, because of the company’s “contemporaneous approach” to reclamation that cut down on the overall number of acres it will have to restore.

Peabody noted that it received the National Award for Excellence in Reclamation from the Office of Surface Mining Reclamation and Enforcement in October for its work at Kayenta. In a video, the agency praised Peabody’s efforts to plant juniper bushes on the site, and for converting some reclaimed land into grazing pasture.

But local environmental activists are not impressed. They claim the vegetation being planted as part of the reclamation project was chosen for how fast it can take root rather than whether it’s appropriate for the area.

Peabody officials disagreed, saying regulators’ oversight of the site reclamation is thorough, with checks required before seeding and for at least 10 years after. In a statement, the company said it has been a “good steward and a great neighbor …. We’ve returned lands to a higher value and will continue to do so throughout the reclamation phase.”

While work to disassemble the complex proceeds, environmental groups in the region are pushing to take steps away from its history altogether.

A coalition of Navajo environmental groups this fall announced the #NavajoEquitableEconomy initiative laying out plans and policies to move the Navajo Nation away from coal and towards more renewable sources of energy.

Nicole Horseherder is a board member with one of those groups, To Nizhoni Ani, which has partnered with Oakland-based nonprofit Native Renewables to train members of the Navajo Nation for jobs in solar installation. In December, the partnership graduated 10 students from a weeks-long solar workforce training program.

“We’re trying to mitigate the closure and get ready for the future,” Horseherder said. “Otherwise other people will take those jobs, and for us that usually means outsiders.”

In April, Nez issued a Hayoolkaal — or “sunrise” — proclamation calling for the Navajo to diversify its energy portfolio and restore lands used for coal and uranium mining. A bill declaring the tribe’s intent to do so died in a Navajo Nation Council committee in October, however.

In that same month, the Navajo Tribal Utility Authority opened a second solar facility in Kayenta with the help of SRP, which said the tribe can now generate enough solar power to serve 36,000 homes. The nation and SRP continue to discuss possible future projects, a company spokesman said in an email.