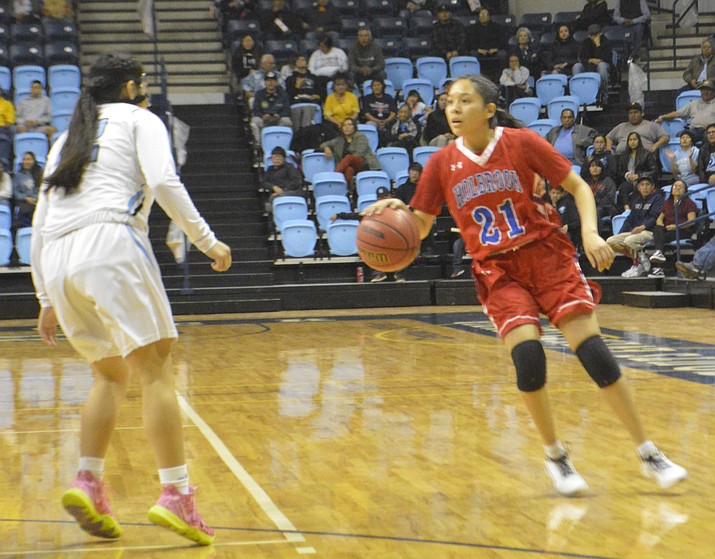 Holbrook’s Desirae Bain looks for an open teammate during the second round of the 2020 AIA 3A State Championships at Bee Holdzil Fighting Scouts Event Center Feb. 21. Holbrook claimed the win by a 50 - 46 score over Window Rock. (Anton Wero/NHO)

Fort Defiance, Ariz. — “We made history tonight” said Greg Perkins Holbrook Roadrunners coach. “This is our first win ever in Window Rock.”

No. 1 Holbrook advanced to the quarter final round of the 2020 AIA girls basketball 3A State Championships, “February Frenzy” to be held at the Findlay Toyota Center, in Prescott, Arizona Feb. 24.

The Roadrunners met the No. 2 Page Sand Devils (22-6) after the NHO went to print.

Earlier in the season, Window Rock overcame Holbrook 55 - 53 in Fort Defiance and won again on the road at Holbrook Tony Munoz Gym, 43 - 34. 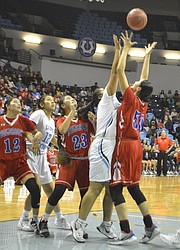 Holbrook’s Matehya Aberle attempts a shot in the paint over Lady Scout defender Rachael Smiley during the second round game. (Anton Wero/NHO)

The Fighting Scouts opened the first quarter with an 8-0 run, setting the tone with full court pressure defense employed by both teams. Holbrook managed only nine points and trailed 15 - 9 as the quarter ended.

There were plenty of turnovers in the second quarter and both teams shot less than normal.

“Maybe we were a little nervous at the beginning.” Perkins said, “We struggle, early on.”

The Fighting Scouts and the Road Runners, traded baskets after the break. Holbrook led by a single point at the end of the third quarter 37 - 36.

Both teams kept the pressure on in the final quarter. The Road Runners spread the floor (four-court offense) exploiting the clock. The Lady Scouts were forced to send the Road Runners to the charity stripe, where Holbrook connect on 5 of 12 free throws to claim the win, 50 - 46.

Holbrook made 15 of 27 free throws, converting 55 percent from the line, while the host Lady Scouts made 12 of 13 free throws, 92 percent.

“We missed a lot of free throws, tonight,” mentioned Holbrook coach Perkins. “We can’t do that in next round (against Page), we were fortunate to get this win.”

Window Rock was led by Bayle Talkalai with 14 points and 3A North co-player of year Jana Solee had a dozen points for the Lady Scouts.