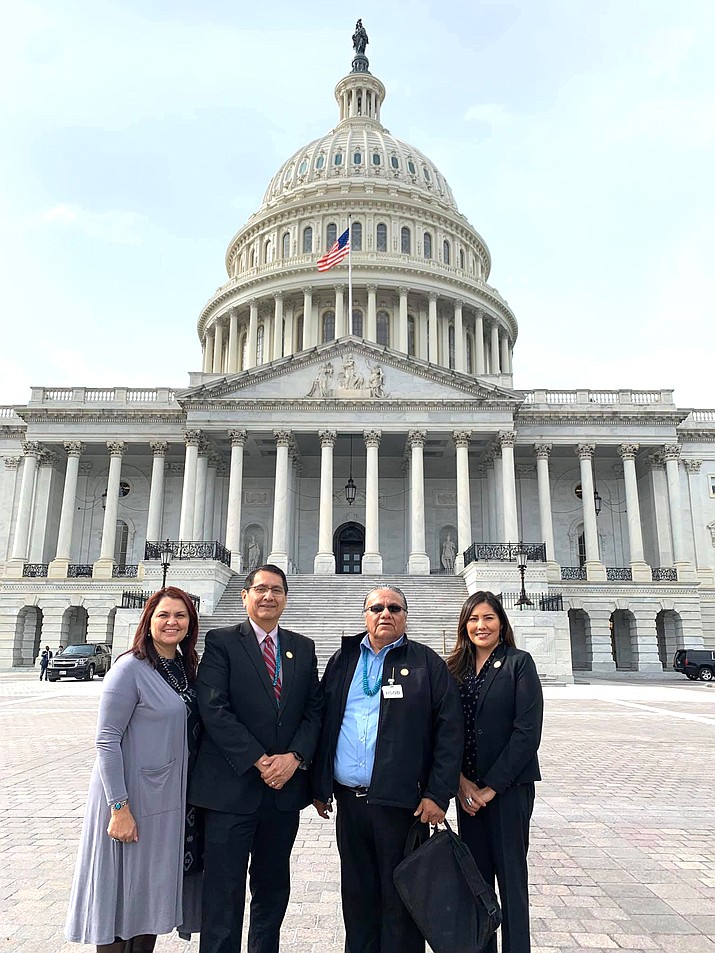 President Jonathan Nez testifies on Capitol Hill Feb. 8 in support of scholarship funding among other budget priorities. (Photo/Office of the President and Vice President)

With President Donald Trump’s budget that proposes to eliminate scholarship funding for Navajo students, Nez urged Congress to restore and increase scholarship funding for Navajo students during his testimony, which also included a call for more funds for transportation and infrastructure, health care, abandoned uranium mine clean-up, and the Navajo Indian Irrigation project.

For the Higher Education Grant Program, President Nez requested $51.5 million for the upcoming academic year in order to provide scholarships to nearly 16,000 Navajo scholarship applicants. He also requested Congress to provide additional funds to improve and upgrade BIE school facilities to replace or repair aging schools on the Navajo Nation.

For transportation and roads, Nez noted that the Navajo Nation has more than 11,200 miles of roads, with over 9,500 miles remaining unpaved. Estimates indicate that it would take $7.9 billion to meet current transportation infrastructure needs. It costs nearly $3 million to pave one mile of new road. Funds appropriated each year only allows the Navajo Nation to build 12.2 miles of new roads annually.

“The Navajo Nation’s roads are lifelines and provide critical thoroughfare for school buses, public safety services, emergency responders as well as access to governmental and public services, shopping and utilities,” Nez said. “It is imperative that the Navajo Nation is appropriated funding for investment in maintenance and infrastructure of on-reservation highways, roads and bridges.”

For the Special Diabetes Program for Indians, Nez requested that SDPI receive a permanent reauthorization in the amount of $200 million per year.

“The Navajo Nation has declared ‘War on Diabetes.’ The Special Diabetes Program for Indians is a beacon of hope in a federal tribal health care system that struggles in the shadow of federal funding shortfalls,” Nez said.

His testimony also highlighted the need for operations and maintenance funding for the Navajo Indian Irrigation Project for Navajo Agricultural Products Industry, which was created through Congress to promote agricultural development on the Navajo Nation. To date, the project remains incomplete due to lack of adequate funds from the federal government.

“The priorities outlined by the Nation seek to strengthen the sacred trust relationship and assist the Navajo Nation’s furtherance of self-determination and tribal sovereignty. These programs provide critical services to Navajo Nation members,” Nez said.

Navajo-Hopi Land Commission Chair Otto Tso also provided testimony at the hearing in support of the continuation of the Navajo-Hopi Indian Relocation Office to assist residents who were relocated because of the Bennett Freeze imposed by the federal government.