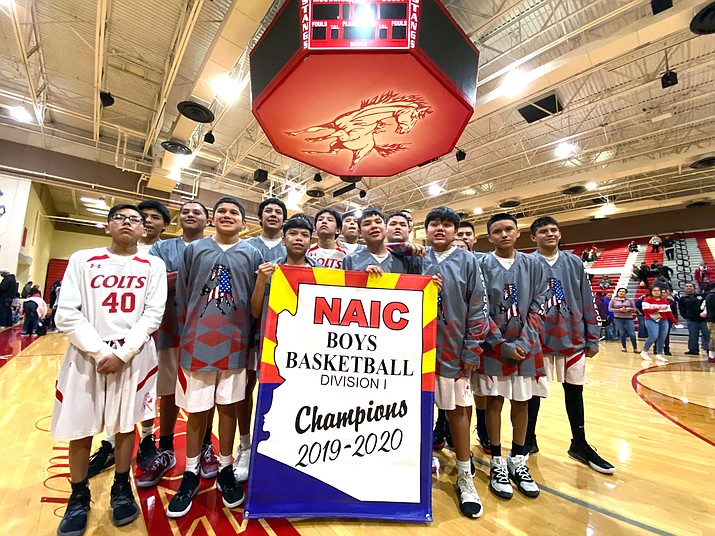 KAYENTA, Ariz. — The Kayenta Middle School Boys Basketball team concluded their season with an impressive 19-1 overall record and as champions of the Northern Arizona Interscholastic Conference (NAIC) defeating Chinle Jr. High School with a score of 45-43.

The tournament was held Feb. 5 and Feb. 8 at the Nash Center at Monument Valley High School in Kayenta.

The road to the championship was challenging and fun for the Colts.

“We had a great season. We had about 20 regular season games and we were able to win 19 of them,” said Peacock. We had four tournaments all together throughout the season, including the NAIC, and we took first place in all four of them.”

Peacock explained they had a lot of players come up from the JV team and the team’s camaraderie was great.

“They stuck together all offseason and as soon as football was over, they hit the gym for open gym and kept a good chemistry together,” he said. “They were really eager to get out on the courts and they had already built a good rapport with each other.”

The team’s only loss during the regular season was to Chinle who they eventually faced again in the NAIC tournament championship game.

“That was one of the tougher opponents that we played,” said Peacock.

“Our guys are really good talent-wise and are pretty skilled. We always made sure we had a competitive edge,” he added. “Chinle always came to play. I’m just glad we were able to play one more game and I knew we were going to end up in the NAIC tournament with them. We were already making that prediction.”

The Colts also played in several tournaments during the season which helped them greatly.

“Tuba City Boarding School had a really good tournament for us,” he said. “I’m happy that we came out on top at that one.”

In the championship tournament, the Colts played three games and they were the No. 1 team for the west and so they got a bye for their first game.

In their first game in the second round, they played Tsehootsooi Middle School Feb. 5 and defeated them 43-23.

“The first time we played Tsehootsooi Middle School in the regular season, they were really physical,” said Peacock. “They brought it again at the NAIC tournament but we were able to hang on, mixed up and strategized our plays.”

In the semifinals, they played Ganado Middle School and narrowly beat them.

“That was a tough game as well. They gave us good competition and we actually won that game by one point,” he said. “They actually had the last shot at the buzzer.”

Peacock said one of his starters fouled out in the last seconds of that game and he put in one of his big guys who was able to put his hands up during one of Ganado’s crucial shots from the free throw line and deflected it.

“If his hands were not up, it could have been a different story for us,” he said. “We were able to pull that one out down to the buzzer.”

In the championship game, they faced Chinle as predicted.

“We already had a good idea that Chinle was going to come up, we were already working toward that game,” said Peacock. “Everybody was focused. I told them to rest and just hydrate themselves and eat right. I took it seriously, we squeezed out everything we could for that game and we came out on top.”

Peacock explained in the third quarter of the championship game, they were down by 14 points at one time and the Colts were able to make a stellar come back.

“The third quarter was pivotal. We put in one of our seventh-graders to give one of our starters a break and he had a three point shot right at the buzzer and he brought us into single digits. From there, we just kept climbing right into the fourth quarter,” he said.

Kameron Young knocked down three three-pointers that the team needed.

“By that time, Chinle was pretty frustrated that we were in bonus. There were six seconds left at the end of the game and we had a body shot. Kameron made one free throw and missed the second one,” he said. “For some reason, Chinle did not want the rebound and the ball went right back into Kameron’s hands and he just ran underneath the goal on the left side and was able to kill those six seconds by throwing the ball around. By that time, we knew we had the championship secured.”

“We won the championship by just two points,” he added. “It was very close.”

Peacock is very proud of his team and his team’s leadership.

“Our team captain, Latrell Smith, he exemplified the leadership that was needed in practice and in games,” he said. “There were some times early in the season, he would tell me, ‘Peacock, my shots aren’t going…’ and I told him, ‘It’s not about you, it’s about you carrying the rest of the guys.’ And so, he was able to do that in the early part of the season.”

“In the championship game with Chinle, I want to also recognize Kameron Young. He was tremendous, he just stepped out when all our players were having a rough game,” he added. “His dad is always encouraging him to step up and to not be afraid to be a leader out there. Without some of his shooting and defense he played, we would not have won the championship game.”

“I want to also recognize former coaches Jacob Nelson and Andrew Cutler, we were all able to help win the title for four years in a row. I also thank my assistant coach, Perry Francis, who is an incredible guy and it was a great partnership we had this year with the boys,” he said. “I also want to thank the community and the parents for their support and enduring the season with us. I also thank God for the opportunity to coach the kids—that’s always my No. 1.”