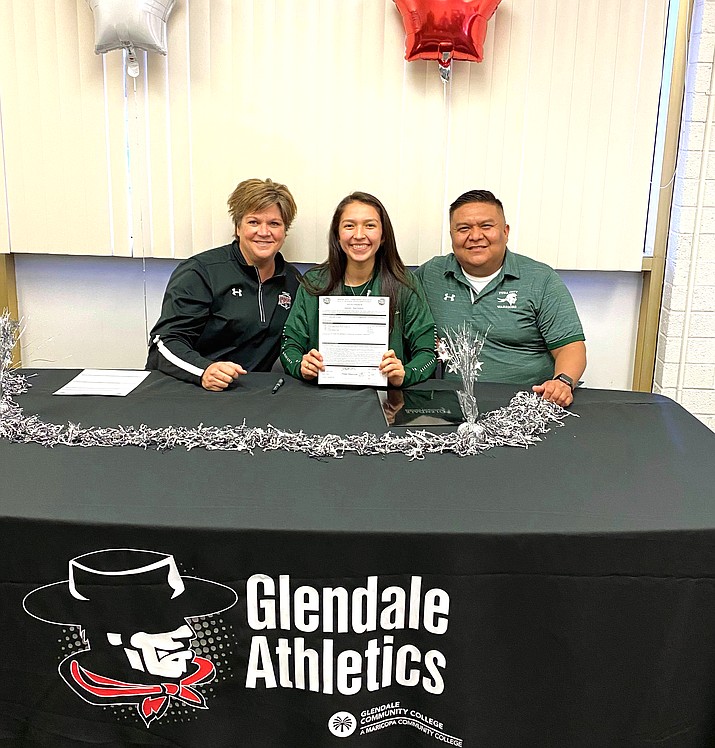 TUBA CITY, Ariz. — Jayda Chee, a senior at Tuba City High School, had another stellar year of volleyball winning player of the year honors, leading her team to winning the 3A North Conference Championship and now signing a letter of intent Jan. 15 to play college volleyball at Glendale Community College.

It is a no brainer that volleyball is in the genes as Chee, 17, follows in her mother’s footsteps. Her mother, April Clairmont, was also a star volleyball player at Ganado High School, New Mexico Highlands University and then Northern Arizona University years ago.

Volleyball is a way a life for Chee, who has been playing the game since she was seven years old. Her passion and love for the game takes her on this new journey that will be guided by Glendale Head Coach Lisa Stuck.

“I always wanted to play college volleyball. I knew my talent would lead to many opportunities and I didn’t want it to go to waste,” said Chee. “I am blessed to be able to play after high school and also have my education paid for.”

Chee said she is excited to play for Stuck. She first met her during her freshman year and fell in love with her coaching style.

“I know I have my work cut out for me, but I am excited,” she said.

Clairmont is also excited for her daughter.

“The dream of playing college volleyball has been one of hers for a long time,” she said. “I’m so very proud of her accomplishments thus far and it’s just the beginning.”

Like mother, like daughter, both have a passion for the sport that was instilled in them from a young age. As a way to give back to the community and as a way to be involved with her daughter’s development, Clairmont coaches and also serves as the club director of the Tuba City Starlings.

“As a Starlings mother, I want the young ladies to have the opportunities that volleyball has given me,” she said. “If they dream of playing college volleyball, it can happen.”

Clairmont said she was one of her daughter’s first coaches when she took over the Starlings program in 2012. Since that time, she has seen the program grow from just 15 girls to more than 60 participants.

“I have seen these young players grow into talented, beautiful young ladies,” she said. “Jayda and I share the same passion; we speak the same volleyball language. It has been like that from the first serve. Even though she didn’t understand ‘the why’ at age 8, she grew into knowing the whys as she evolved in the sport.”

Clairmont said playing at the next level of volleyball has always been her daughter’s dream and her goal is to also become a prekindergarten teacher.

Chee’s decision to play at Glendale Community College was immediate and she knew exactly what she wanted.

Clairmont said she is looking forward to what the collegiate volleyball opportunity has in store for her daughter to grow and get stronger. Chee hopes to play at the next collegiate level after she is done in two years at Glendale.

“I am so very proud of her accomplishments in school and in her volleyball career thus far,” said Clairmont. “I know what it takes to play at that level and I fully support her dream.”

“I knew she would sign to a college but the question was who and where?” he said. “Her decision to sign at Glendale is a step closer to playing at the D1 level. I’m excited she chose GCC.”

Barlow said the coach at Glendale Community College is a great coach and he knows Chee will be in good hands.

“She will get the exposure she needs and be prepared to play further into her career,” he said.

Barlow said there have been many highlights of Chee’s career and coaching her was fun due to her willingness and compassion for the game.

“She’s just a natural volleyball player,” he said. “Challenging her to play at competitive levels, setting high expectations and loving the game were the highlights.”

“I don’t think that’s happened at Tuba City for volleyball before,” he said. “It definitely raised the bar in the gym.”

Barlow said his goal as a coach is to help make great humans by encouraging players to learn to be the best at what they do in all aspects of their lives, to use adversity to their advantage to get through life, to be great leaders and hard workers.

“I love to see former players succeed, to see them earn their degrees. That’s when you know, you were a part of their success,” he said. “That makes me happy, that’s the goal.”

Chee said she is humbled and appreciates the support of so many people.

“I extend a big thank you to my supporters, my family, my community, my coaches and mentors, and especially my teammates,” she added. “All four years, I was surrounded by girls who became my sisters. I wouldn’t be where I am today without them. Most importantly, I owe everything to God. When times got tough, I leaned on Him and when times were great, I thanked Him.”

Clairmont also thanks everyone that supported her daughter, Coach Barlow and other coaches that helped refine her skills. She especially thanked the late-Rich Foley who was a longtime volleyball coach that paved the way for many volleyball players.

“Coach Foley was very proud of ‘his Jayda’ from the first day she joined Starlings,” said Clairmont. “Every chance we go to see him, he would coach her, speak to her, mold her and he believed in her.”

“We are humbled and forever grateful for everyone to be a part of Jayda’s journey thus far,” Clairmont said. “If you’re in the area next volleyball season, catch a GCC game.”