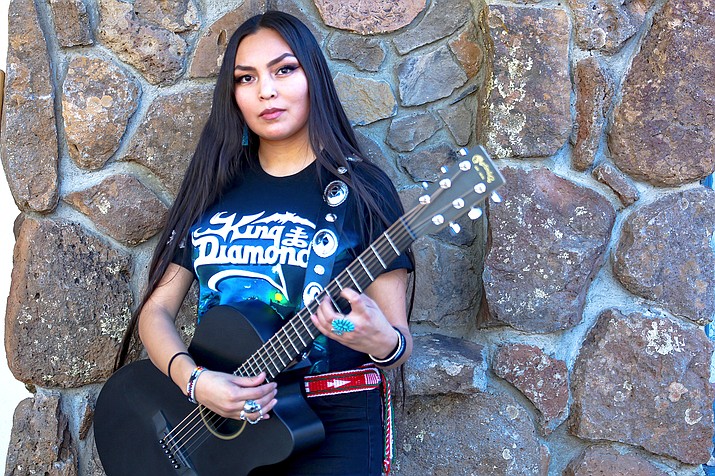 Sage Bond creatively expresses herself through her heavy metal music. Her album 'Prisoner' helped her work through and heal from depression and anxiety. (Photo coutesy of Sam Minkler)

FLAGSTAFF, Ariz. — Sage Bond's voice is powerful and mesmerizing, even if you might not like the heavy metal music she plays. But for her, the music is a way of working through depression and anxiety — the way heavy metal sounds is part of the point.

“When people talk about metal, they always associate it with anger and rage and being scary and never showing sad emotions, or happy emotions…,” Bond said. “But metal heads feel things also, and they write about all the emotions. Music is just pretty much therapeutic to me.”

Bond started playing guitar when she was nine years old and she played a lot of Metallica and Megadeath. Some of her influences include Iron Maiden, Judas Priest and Arch Enemy, because of the female front women.

“I wanted to be the lead guitarist in a heavy metal thrash metal band,” Bond said, adding that she couldn’t live that dream because her pinkie wouldn’t cooperate. “I just practiced in my room and mimicked all my favorite metal singers. I didn’t even appreciate the music that influenced metal. I was just like, ‘Nothing’s heavy enough for me. I need more metal.’”

But Bond did have musical influences in her family. When she really started singing at 13, Bond said she sang mostly R&B, like Alicia Keys. Her mom would take her to karaoke and that’s where Bond learned to sing in front of other people and get over her anxiety at performing.

When she first started out, Bond was compared to Taylor Swift and Carrie Underwood. Then as Bond started learning how to put the power in her voice, she was compared to Stevie Nicks and Janis Joplin because of how raspy her voice sounded. Now, Bond is compared to male metal vocalists because of the vibrato and strong tenor notes that she holds during a belt.

There is also what she calls the cookie monster voice, which she started incorporating into her music about two years ago and it is one way she uses to express herself.

“It was pretty scary for people who didn’t expect it or the crowds who expected me to sing blues or light rock acoustic. You don’t expect acoustic to be heavy,” Bond said. “I just like being able to express myself even further and showing that emotion through music.”

Bond knows she can’t please everyone with her music — everyone has their own tastes — and they want to hear the lyrics or get some feeling from the music.

“I’ve been dealing with anxiety and depression from a young age and I was diagnosed with major depression in high school,” Bond said. “My first EP, I wrote five songs after my dad left and he was an alcoholic and he brought domestic violence in our house. Once he left, I was really angry and confused. I didn’t want to follow in his footsteps of alcoholism and drug abuse.”

She wants to be a role model for her younger brother, who is also the artist who designed her t-shirts and did the drawing on her album cover for ‘Prisoner.’

Bond got more comfortable expressing herself through singing instead of speaking about what was going on in her life. But then she joined a suicide prevention group and started getting comfortable with telling her story and the stories behind her songs.

In 2015, the vice president of the Navajo Nation asked her to be part of his Building Communities of Hope tour, which was directly trying to address suicide among youth and other ages among the Navajo people.

“We would tour on and off the Navajo reservation to communities where incidents had happened, either in the same week or the night before,” Bond said. “I felt more comfortable sharing my song with everyone and it got people inspired. They were able to hear what helped me heal. And they could relate to or they had also been through some of the same experiences as me.”

In fact, the song ‘Prisoner,’ the title song from her album, was specifically about dealing with depression.

“I was in therapy all four years of high school, but when the therapy sessions stopped, I fell back into my old thought processes and I let it all get to me. But I locked myself in my room for a day and I worked on this song,” Bond said. “I helped myself get through that and I put it as clearly as possible into the song. That song helped me through. The whole concept of the album and all the songs on there — it’s all about healing and growing and becoming mature.” 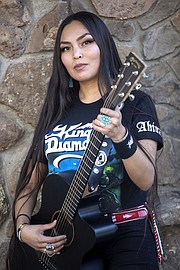 Sage Bond at an event at the Museum of Northern Arizona Jan. 26 on Indigenous people and heavy metal music. Bond plays heavy metal music to express herself creatively. (Photo courtesy of Sam Minkler)

Dealing with being a woman in a male dominated field

Bond said there have been a lot of ups and downs to being a woman in a male dominated field. Initially when she started out, people would ask her, ‘Are you the girlfriend? Or, ‘Where’s the band?’

“I’m was like, ‘I am the band,’” Bond said. “There wasn’t a lot of female musicians. I guess there was Sihasin that I could look up to and Radmilla Cody came to the schools. But I wasn’t really exposed to that many female artists on the reservation unless they were doing traditional music and not metal.”

And culturally, Bond gets told she shouldn’t do things that don’t represent her family in a positive light and that scares everyone.

“I just learned that I cannot please everyone,” Bond said. “I get backlash from both sides. My Native people say I’m playing the white man’s music and I should just play traditional music or I should sing in Navajo. And then on the other hand, I’m labeled as a Native American artist, which puts us all in one huge category or genre.”

Bond has a certain way of dressing that is part of how she deals with being in a male dominated field.

“I've been told to wear cowboy hats, pink, and dresses and corsets to improve my stage presence, but I love a masculine look and the tough, empowered feeling I get when I wear all black and a metal shirt,” Bond said.

There are positives as well. Bond said she was asked to give a presentation on indigenous representation and heavy metal in her world music class.

“I got to educate everyone on a quick history of the Navajo people and what they went through and what we’re going through,” she said. “People were like, ‘Oh my God, I didn’t know that.’ And they really loved the presentation. A lot of people were asking, ‘How can we do better as allies?’”

Looking toward the future

“I just want to perform and be able to just do my music forever,” Bond said. “Maybe get paid some. That’s the dream.”

But she has more dreams than that. Bond would love to have a tour, but she admits that is hard as an indigenous woman. And her family worries about her safety-wise, for good reason.

Bond recounts an incident where she felt like she was almost kidnapped when she went to get groceries at the Safeway of U.S. 89. She said she reported the incident to Flagstaff Police Department. They transferred her to Tucson Dispatch. Eventually the Arizona Highway Patrol was keeping a lookout for the truck, and she tried to keep an eye out for it around Flagstaff.

“I had to let some of my teachers and faculty know,” Bond said. “I hate saying it, but you have to prepare. Like if I don’t show up for class one day, that is not normal. It’s something you have to deal with as a female artist out there. I have to make sure I notice everything, everywhere.”

But dream wise, she wants to continue her music education at Northern Arizona University, bring that musical knowledge back to the reservation and be able to have music programs for the kids because Bond didn’t have that when she was growing up. She’s minoring in psychology, and Bond thinks about pursuing music therapy, too.

“I would have been more encouraged if there had been a music program on the reservation,” Bond said. “I want to be a good role model (for the youth) and I don’t want to scare them. I want to show them there are these great ways to express yourself. Don’t hurt yourself. Be open to creativity and be brave enough to start their own processes of creating and expressing themselves through art.”