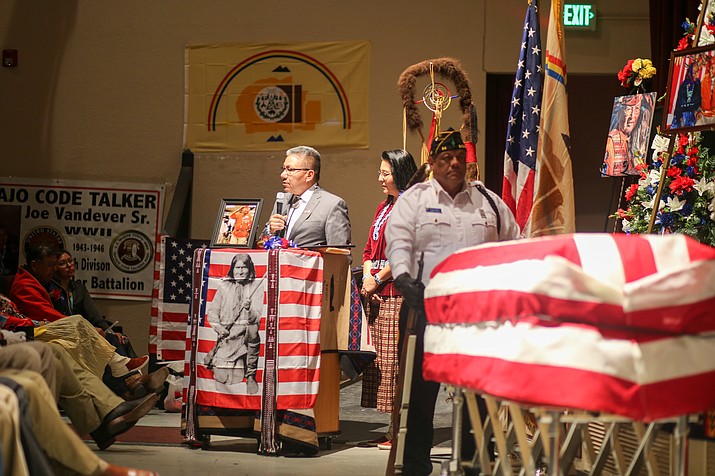 On Feb. 3, Nez issued a proclamation that called for all flags on the Navajo Nation to be flown at half-staff in honor and memory of Vandever, who passed away Jan. 31 at the age of 96 in Haystack, New Mexico.

During the service, Lizer presented the proclamation and a Navajo Nation flag to the family of Vandever, and offered his condolences on behalf of the Navajo people.

“As we mourn the loss of Navajo Code Talker Joe Vandever, Sr., we also honor and remember all his great sacrifices for our Navajo people and the entire country. Our thoughts and prayers are with his family, friends, and community members as they lay him to rest,” he said.

Vandever enlisted with the U.S. Marine Corps in Santa Fe, N.M. March 26, 1943, and was honorably discharged as Corporal Jan. 22, 1946. He served in northern Solomons, Bougainville, Emirau Islands, Guam, Marianas Islands, Okinawa, Ryukyus Islands, Occupation of Japan, and Occupation of China. In 2001, he received the Congressional Silver Medal for his service as a Navajo Code Talker in World War II.

“Our Cheii and Shimásání (grandfather and grandmother) encouraged us to be the best we can be and to contribute to the Navajo Nation and the world. He stressed the need for each of their 91 grandchildren to speak and value our Navajo language. He said our language and culture identifies who we are and it will protect us and make us stronger. We will greatly miss our grandparents,” said grandson Eric Nez.