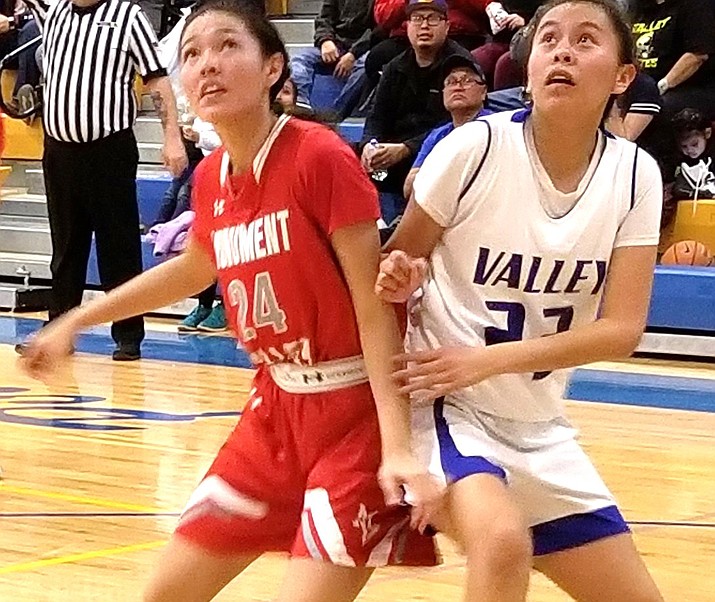 The Monument Valley boys also faced the Pirates Feb. 6. Monument Valley blasted out of the gates, with Latrell Maloney’s three point basket from downtown, adding to the 9 to 0 start before the Pirates answered with three straight baskets. A three-point basket by Tristen Store, another one from the baseline by Demetruis Begaye and an old fashion three pointer (basket plus an one) scored in the paint by Brady Spencer, summed up 13 points.

A put-back basket by the Mustangs’ Maloney tied the game at 13 all at the end of the opening quarter.

Both teams traded baskets early in the second period, Valley’s Ryan Clark’s full-court pass found Marquette Thompson for a lay-in basket that sparked a 13 - 0 run, giving the host a 30 to 21 scoring advantage at the end of the first half.

The Mustangs’ mini run of 5–0 was answered by a Valley’s run of eight points, giving the Pirates a 38 to 26 point edge midway thru the third quarter. Mustangs coach Richard Beverly called a 30 second timeout to talk with the team.

“They are out hustling us, get out and run, run,” Beverly said.

Monument Valley was sent to the charity stripe by the Pirates, where they connected on 4 of 6 free throws and the Mustangs gained a slight lead, 47 to 43.

Not to be out done, the Pirates had a mini run – a 9 to 5-point run that ended with a four-point play by the Pirates’ Thompson. He was fouled after he made a three pointer from downtown Sanders. That shot tied the game at 52.

The game was tied three more times in the final quarter, 53, 55, 59 all. The Mustangs’ Andrew Sheppard scored the last five points of the game, including a lay-up with 13 seconds remaining on the clock. With the clock running out, the Pirates attempted a clutch shot that bolted off the rim, leaving a final score of Mustangs 61 Pirates 59.

At this point of the season, all teams need to win, to remain in contention for the Arizona AIA state boys and girls tournament.

“We need this win,” commented Monument Valley coach Richard Beverly, “we were fortunate to win – a good tune up for the state tournament.”

Sheppard led all scores with a game high 21 points, for the Mustangs, followed by Albrandon Bijoe and Roberto Flores with 12 points each.

“(We) kept the intensity up thru the fourth quarter — we played hard,” said Patrick Boone, Valley Pirates coach, “we just a few shots at the end.”

Marquette Thompson and Brady Spencer led the Valley Pirates of Sanders, with 18 points and 15 points respectively.

At the latest reporting, the Monument Valley Mustangs lost to the Fighting Scouts of Window Rock (55 to 44), Feb. 8.

The Mustangs will most likely will enter the Arizona State AIA 3A tournament on the road, on February 19 – at Blue Ridge High School home of the Yellowjackets.

The Valley (Sanders) Pirates won on the roading beating Greyhills Academy Knights, 77 to 25, on February 8.

Valley (Sanders) will most likely will enter the Arizona State AIA 2A conference play-in tournament on the road, starting on February 19, at a site undisclosed of Feb. 8.

In a must win game, for the Kayenta Monument Valley Lady Mustangs and the Lady Pirates of Valley and even more difficult on road for the Mustangs, the Pirates battled them to a single digit lead of 7 to 6 points, at the end of first quarter.

The Mustangs outscored the host Pirates, 11 to 9 points and Monument Valley adhere to a single point lead of 17 to 16, midway thru an important freedom game.

Neither team gave an inch, as the game was tied three times in the third frame, the Mustangs were able to gain a three point edge, as the quarter expired, leading 33 to 30. Highlight of quarter was when Nizhoni James went to the charity and connected on nine straight free throws.

The Lady Mustangs’ Adriana Sheppard and Shree Yazzie squared off to a 13 point quarter with the Lady Pirates’ James and Ranona Nez, that led to 46 to 43 point finished and a win for the Lady Mustangs.

Valley Lady Pirates (Sanders) will most likely (based on the rankings) will enter the Arizona State AIA 2A conference play-in tournament, on the road, starting Feb. 21, in the Prescott area.