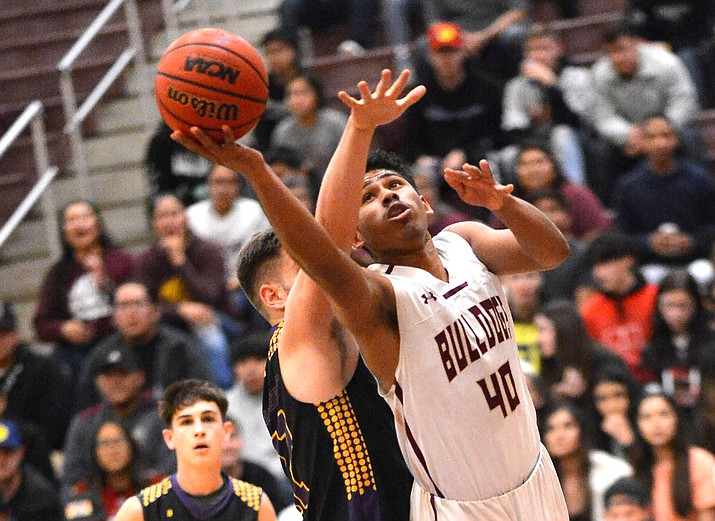 The Winslow Bulldogs and Lady Bulldogs easily defeated the Payson Longhorns Jan. 24. The boys final score was 83-46 and the girls 63-22. (Todd Roth/NHO)

In their 63-22 win the Lady Bulldogs took a 15-6 lead in the first quarter and were up 32-11 at the half and 47-20 after three quarters. Oniah Barton-Paddock led all scorers with 14 points for Winslow. Kalie Begay was also in double figures for the Lady Bulldogs with 11 points. Emmy White led Payson with seven points.

In their 83-46 victory the Bulldogs sped to a decisive 30-5 lead in the first quarter and cruised to a 43-20 lead at the half and a 71-33 margin after three quarters. Terrell Young led all scorers with 20 points for Winslow. Martinez with 16 points and Zachary Wagner with 12 points were also in double digits for the Bulldogs. Porter Flake with 12 points was the only Longhorn in double figures.

The Winslow teams played Snowflake at home Jan. 28, before facing Show Low Jan. 31. They then hosted Holbrook Feb. 4 and will host Blue Ridge Feb. 7. Winslow will end the regular season on the road at Payson, Feb. 11 and at Snowflake Feb. 14.