Navajo look to Arizona utilities to make up for coal losses 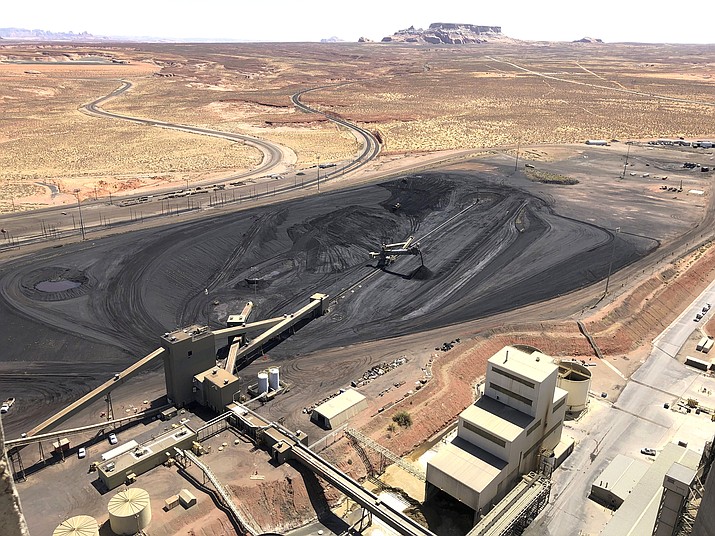 As the coal industry nears its end on the Navajo Nation, the tribe is looking to Arizona utilities that shared in the power generated on the reservation to help make up for the financial losses and environmental impacts. (AP Photo/Susan Montoya Bryan, File)

FLAGSTAFF, Ariz. (AP) — As the coal industry nears its end on the Navajo Nation, the tribe is looking to Arizona utilities that shared in the power generated on the reservation to help make up for the financial losses and environmental impacts.

Navajo leaders have requested nearly $62 million in an ongoing rate case for Tucson Electric Power to establish a fund to support renewable energy projects. The tribe also wants a commitment from utilities to buy the power and support for water infrastructure.

The appeal could extend to another major state utility and aid other eastern Arizona communities that have long-relied on revenue from coal.

Nez told tribal lawmakers gathered in Window Rock for their winter session this week to curb spending because of an expected $30 million to $50 million revenue shortfall from the Navajo Generating Station alone.

Tucson Electric doesn't operate any of the power plants in the Four Corners region. Utility spokesman Joseph Barrios said Tuesday it supports transition efforts for impacted communities but wouldn't adopt a position without agreement from the other owners.

"Given our minority ownership interest and the complexity of potential legal issues, we defer to the plant operators to coordinate specific negotiations," he wrote in an email. "We support a coordinated approach to ensure consistent and fair negotiations that balance the interests of all stakeholders."

The Navajo Nation is not an intervenor in the Tucson Electric rate case, meaning it cannot participate in administrative proceedings to determine the outcome. But the Arizona Corporation Commission can factor in the tribe's comments that were submitted ahead of a public hearing Jan. 28 into the final decision.

Commission Chairman Bob Burns said the time is ripe to consider the future of communities where utilities are accelerating the closure of coal-fired power plants, and the commission will be looking for wide-ranging input.

The tribe came to its $61.8 million request to establish a transition fund by multiplying the megawatts Tucson Electric owned in three power plants by $100,000. It's a workable standard that could be applied to other Arizona utilities that have owned a share in those plants, and takes into account environmental and health impacts in local communities, the tribe said.

No more than half the funding should come from ratepayers, the tribe said while asking first that shareholders cover it. Tribal leaders, coal workers, environmentalists, utility planners and other government officials should decide how the money is spent, Nez and Lizer wrote.

The tribe also requested help to extend power and running water to Navajos who have lived in the shadow of power plants, support to acquire water rights in the Colorado River basin, money to build pipelines and a commitment from the utilities to buy power from tribal facilities.

The Salt River Project, another major utility that operated the Navajo Generating Station, isn't regulated by the Arizona Corporation. It is working with the tribe on renewable energy projects and retraining opportunities for workers.

Navajo environmental groups have made requests similar to that of the Navajo leadership in rate cases for Arizona Public Service Co. and for Tucson Electric, though at a smaller scale. Jessica Keetso of To Nizhoni Ani said the groups welcome the additional support.

"It's the least utilities can do because they've taken so much of our resources and our raw material, and that's all we're asking for, to help communities, especially the impacted communities to diversity their economy, to help with general funding of the Navajo Nation," she said.

Members of the Arizona Corporation Commission told Arizona Public Service Co. last year that it should be prepared to propose a transition fund for affected communities in its next rate case.

APS spokeswoman Lily Quezada said the utility is participating in economic development forums in the Four Corners region, and would be transparent and open in its plans to help ease the transition.